Bratislava for under £100 a night! How to visit Slovakia’s charming capital city on the cheap

Bratislava isn’t half as glamorous as nearby Vienna. But there’s a lot to be said for a beautiful city that’s not overrun by tourists, where the beer is almost given away.

The patron saint of Slovakia’s disarmingly charming capital is St Martin, the Roman soldier who tore his cloak in two to clothe a beggar. And you could say Bratislava, located at a crossroads in central Europe, is similarly divided — between east and west and between its colourful medieval history and more recent Soviet past.

It all makes for an intriguing short-break destination, easily reached by low-cost flights. 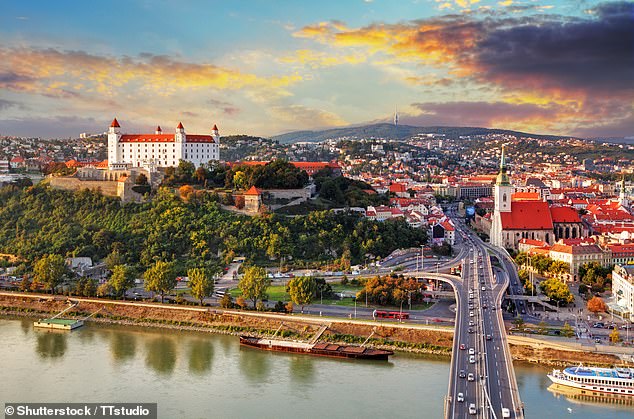 ‘Bratislava isn’t half as glamorous as nearby Vienna. But there’s a lot to be said for a beautiful city that’s not overrun by tourists,’ writes Thomas W. Hodgkinson

For a song, you can spend your nights floating on the waters of the Danube. This basic boat-hotel offers a fine view of the SNP bridge and the striking UFO restaurant — and it’s right on the doorstep of the old town. Doubles from £48, botelgracia.sk.

The Devin is remarkably good value considering its superior location, perched on the edge of the Danube, its grand interiors and its portentous history as a meeting place for the Communist nomenklatura. The tentative staff seem a little cowed by their surroundings, but there’s a sumptuous breakfast with delicious homemade cakes. Doubles from £65, hoteldevin.sk.

This smart, centrally located chain hotel is an excellent option. The staff are friendly, the breakfast impressive, and there’s a seductive lounge bar offering fine views from the roof. Doubles from £80, falkensteiner.com.

Something of a period piece, this cheap hotel on the eastern edge of the old town is not glamorous. But for anyone happy to learn what a Slovakian hotel might have been like 20 years ago, it’s an enjoyable experience, made more so by the friendly staff. Doubles from £45, elisabeth.sk.

What to see and do

Slovakia’s capital is overlooked by the handsome Bratislava Castle (tickets £9). For an even more romantic experience, take the five-mile trip to Devin Castle (£4, muzeum.bratislava.sk) — it’s a ruin fit for a Byronic ode. There are also some jolly activities for the young at heart, including a run-the-gauntlet installation, which involves dodging swinging sacks of sand. 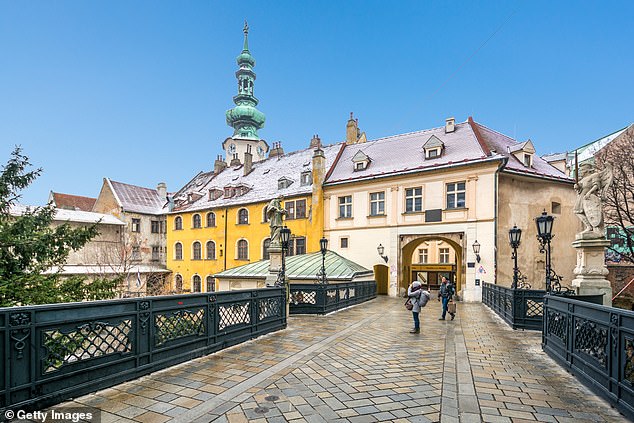 Capital’s finest: Highlight of the old town, above, include Michael’s Gate and St Martin’s Cathedral

Visit St Martin’s Cathedral (free, dom.fara.sk), which has hosted the crowning of ten Hungarian kings. Oddly, a motorway passes a few feet away — built by the Communists in a gesture of disrespect.

Another old-town highlight is Michael’s Gate (£4, visitbratislava.com/places/michaels-gate). Ascend its spiral staircase, taking in the weapons museum, then emerge to gaze out over the city’s bright red rooftops.

The island of art

In Bratislava itself, the Nedbalka Gallery of Slovak art (£4) is worth a look. But a far better bet is to make the trip to the Danubiana Meulensteen Art Museum (£9, danubiana.sk).

Founded in 2000, this gallery is situated spectacularly, 12 miles south of the city on an island in the Danube. It’s devoted to modern works by middle-European artists, ranging from the bizarre to the stunning. Highly recommended.

Fruits of the forest

Fancy a walk in the woods? Just a couple of miles out of town, the sprawling Koliba Forest, dense with oak and beech, is like something out of a fairy story. There’s an excellent playground for children, as well as a summer bobsleigh run, which is pretty thrilling whatever your age (bobodraha.sk).

In 1972, someone thought it was a good idea to build a structure that makes it look as if a flying saucer is about to attack Bratislava. And they were right.

You pay £7 to ascend in a lift to the striking modernist UFO Restaurant (pronounced locally as ‘oof-o’). From there, you get a dazzling view of the city and the Danube below — and, if you’re peckish, a decent burger, too (£10, u-f-o.sk). 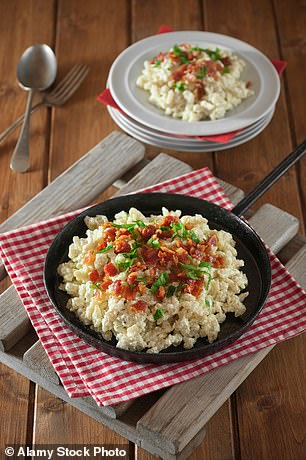 Bang next to Michael’s Gate, this simple restaurant does strapacky, a popular Slovakian dish, for a few quid. Expect a kind of macaroni made from dumplings and shredded cabbage, garnished with lard. It’s surprisingly tasty. Address: Michalska 388/18.

To the south of the old town, the leafy avenue of Hviezdoslav Square is lined with smart restaurants, some of which are good value. Cafe Verne has tasty Hungarian goulash for £7. Address: Hviezdoslavovo namestie 175/18.

The name means ‘Slovak restaurant’, which is encouraging. This unpretentious place shows that even in the heart of the touristic old town you can dine well without spending much. Try the steak with pepper sauce. Address: Panska 239/8.

Rooftop does the best burgers in Bratislava, and its lofty location offers a fine view of Michael’s Gate. It’s a fraction more expensive than your average Slovakian restaurant, but well worth it. Address: Hurbanovo namestie.