‘They let me dance up and down the aisle’: Traveller’s joy when she discovers that she’s the ONLY passenger on board an A319 airliner 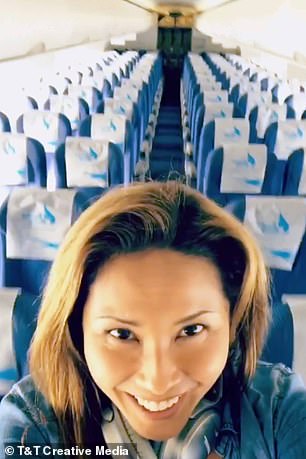 A traveller was left stunned after realising she was the only passenger on board a flight – and was treated to unlimited food and drink.

Latsamy McAdoo, from Miami, Florida, was on vacation in Thailand and booked herself on a Bangkok Airways Airbus A319 from Bangkok to the island of Koh Samui.

After boarding, she was surprised when one of the flight attendants started shutting the door – despite the fact that no other passengers had boarded.

Latsamy, who has family in Thailand, regularly flies between the mainland and islands when visiting and was expecting the flight to be full, as usual.

Her amazing flight was in January this year and she recorded a video of it for posterity, but only recently shared it on her Instagram page, @worldsmyoyster.

It shows her dancing by herself down the aisle before the lonely flight starts to get a bit scary, due to turbulence.

When she lands 1h30m later – after a delayed landing due to the weather – Latsamy finishes her flight diary by filming her solitary case arriving at baggage claim. 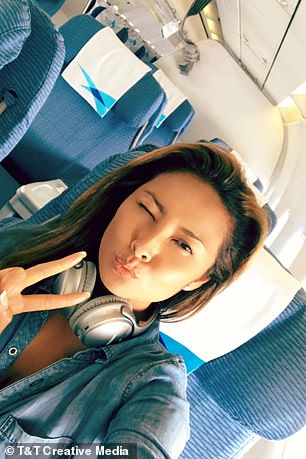 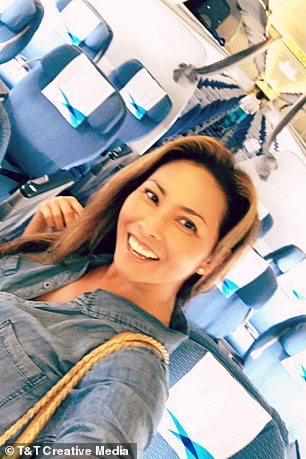 Latsamy was allowed to dance up and down the aisle – and food and drink was unlimited. However, she said the experience became a little scary when the plane hit turbulence

She wrote on her Instagram post: ‘It was exciting and amusing at first. They let me run up and down the aisles, dancing by myself.

‘But then it started to get bumpy, really bumpy. I began to worry that this was some type of Final Destination flight and it was my time to go. Luckily, the pilot was able to land on the island relatively smoothly.’

Some may be wondering why airlines operate flights with just one passenger.

One is that there is very probably cargo that needs to be delivered.

The other is that they are scheduled flights, so cancelling them would not only disrupt cargo distribution but also the plans of passengers waiting to board return legs.