Never mind the rippers, shredders, Jägerbombs and Moncler puffer coats. One of the great benefits of traveling with a snowboard or a pair of skis: access to splendid terrain that’s otherwise off limits, from the Andes to the Himalayas.

Accommodations can be pretty exclusive, too. In January, Hyatt will open the 100-room Park Hyatt Nizeko Hanazono, a sleek ski-in ski-out headquarters — in a mountainous area of Hokkaido — for the 70 slopes from Mount Annupuri to Hanazono. W Aspen recently joined The Little Nell (opened in 1989 and now aglow from a 20th anniversary renovation) in the Colorado mining town that became a jet-set ski resort. And there really is a lodge to suit every style, from history buff (the restored ghost town that is Dunton Hot Springs) to gastronaut (the Michelin-starred Echaurren in the Spanish ski town of Ezcaray). 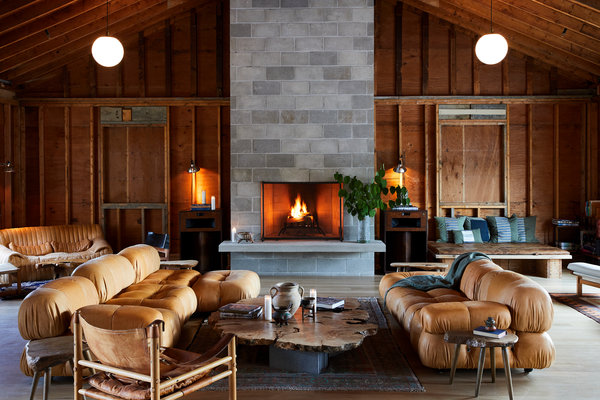 This 48-room reimagined motor lodge is the brainchild of some creative heavyweights, led by Ben Svenson of the Boston-based design company Broder and including John Stirratt, a founding member of the band Wilco. It sits at the crossroads of the Hoosic River, the Appalachian Trail and the Mohawk Trail in a tract of the Northern Berkshires that’s come to be known as art country. (The Massachusetts Museum of Contemporary Art, or Mass MoCA, and the Williams College Museum of Art are nearby.) It’s also ski country: Jiminy Peak is about 25 minutes away.

The hotel has its own arts-and-adventure coordinator, and a 1962 ranch house has been revamped as a lodge with plenty of wood and leather, and a central fireplace. The guest rooms are a study in the underestimated beauty of plywood, with built-in king beds and lounge seats to take advantage of the six-foot-by-six-foot picture windows. Some have bunk beds, and all have sliding doors that open onto the grounds, landscaped by Reed Hilderbrand. An air-circulation system replaces the fresh air in the rooms every 60 minutes, bringing the Berkshires inside year round.

Opened in Jackson Hole in the summer of 2018, Caldera House is the $100 million dream come true of the private-equity powerhouse Wesley Edens: a luxury retreat (and alpine membership club) with the rugged spirit of the American West. It’s got a vast spa, a fully equipped gear shop, a stylish Italian restaurant and an airy and clubby members lounge to which hotel guests get access.

There are eight deluxe suites, each with a full kitchen: four two-bedrooms and four four-bedrooms, some of which were designed by the local architecture firm Carney Logan Burke. They have the kind of swagger that stone, wood and sheepskin throws can deliver.

Speaking of swagger: This winter, the Olympic gold medalist Bode Miller will guide groups of five on daylong coaching and skiing adventures for $25,000, breakfast included.

Fresh off a top-to-toe renovation, this resort — with 273 rooms (and suites), plus 37 residential units — brings a lot of polish to the wilds of the Canadian Rockies. The sommelier hosts complimentary tastings of the wines of British Columbia; there’s a heated outdoor pool and a spa with steam rooms and a beauty parlor; and even the smallest guest room is spacious, with big windows, a balcony, a fireplace and a soaking tub.

The resort is a few minutes from Whistler Village — walkable along wooded trails — and a free shuttle ride from the Whistler and Blackcomb mountains. (The gondola between peaks takes 15 minutes.) There, the ski concierge greets you with your gear, including boots that have been warmed overnight. Nonskiers in the crowd can do everything from bobsled on the world’s fastest track to spelunk in an ancient ice cave.

In a small village of stone houses and farmsteads in the Haute Alpes in southeastern France, this five-room guesthouse was fashioned out of an old farmhouse and opened in 2017. The house faces south, with views of the fir- and larch-clad mountains and a lake in the valley below. There’s a free shuttle to the nearby family ski station, with 35 slopes (green to black) and 17 lifts.

It might be tempting not to leave the house, though. The rooms have a sweet, Scandi spareness, modern bathrooms, the odd exposed beam and wooden balconies to bask in the alpine landscape and sun — which, according to the owners Sandrine and Xavier Lesharny, shines 300 days a year. And calling all gastros: Mr. Lesharny is a classically trained chef (he studied with Guy Savoy), sources locally, serves inventive meals in an intimate dining room with panoramic views and offers cooking classes one Saturday a month.

This old farmhouse dates to the 14th century and once operated as a 20-room inn. When Kathrin Mair inherited it from her father, she and her husband, Helmuth Mayr, gutted it, restoring its historic facade and preserving elements like herringbone parquet floors. Adding a striking modern annex, they created a chic eight-suite bed-and-breakfast in the Italian province of South Tyrol.

The rooms are uniquely designed, with contrasting details (see the antique carved armoire alongside a coffee table made of rock) and whimsical amenities (vintage blanket valets, for example, and there’s a fish tank that divides a bedroom from the bathroom). Kronplatz, the popular ski resort in the Dolomites, is about 10 minutes away by car, and Niedermairhof has a dedicated room to store one’s gear and heat one’s shoes, après-ski. The best-kept secret: You can walk up to a local hut, eat some Tyrolean dumplings, rent a toboggan for about five dollars and whiz down.

Niedermairhof; from 180 euros, or about $198 (including breakfast); Via Duca Teodone 1, Brunico, Italy.

52 PLACES AND MUCH, MUCH MORE Follow our 52 Places traveler, Sebastian Modak, on Instagram as he travels the world, and discover more Travel coverage by following us on Twitter and Facebook. And sign up for our Travel Dispatch newsletter: Each week you’ll receive tips on traveling smarter, stories on hot destinations and access to photos from all over the world.