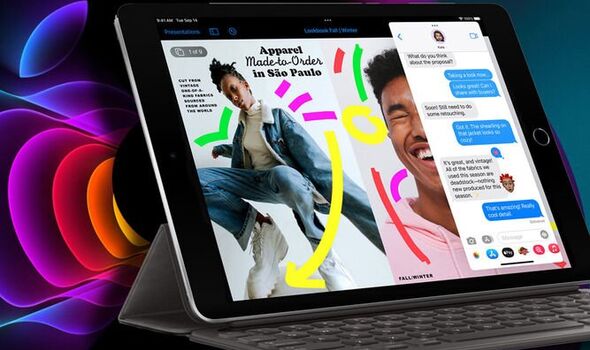 Apple may have just announced the release of two new iPad models but there’s also good news for anyone who owns a current tablet from the US firm. After months of waiting, iPadOS 16 is finally being released tomorrow with this major upgrade bringing a swathe of new features to Apple’s range of popular portable devices.

iPadOS 16 was actually first announced all the way back in June at Apple’s WWDC Developers Conference and it seems the US firm is finally ready to unleash it on millions of users across the globe.

Once available, this software upgrade will include new ways to multitask on the screen thanks to something called Stage Manager. This acts much more like a laptop with users able to create overlapping windows of different sizes in a single view. The window of the app users are working in is displayed prominently in the centre, and other open apps and windows are arranged on the left-hand side in order of recency. This will make it far easier to switch between workflows on the iPad and it’s something that is long overdue.

Along with better multitasking, Apple is also upgrading its Messaging app on the iPad. This update allows users to delete a text or edit things after it has been sent.

Apple’s Mail is also improved thanks to new smart tools which offer the ability to cancel delivery of a message before it reaches a recipient’s inbox or schedule emails to be sent at a later time or date. Emails can also be resurfaced with something called Remind Later and users can get notified if they forget to include an important part of the message, like an attachment or recipient.

Another nice new feature is Apple’s popular Weather app. This comes to iPad for the very first time and is packed with information such as temperature, UV index, sunset times and hourly forecasts.

It’s a nice upgrade from Apple but, sadly, one of the best changes is only available to those with the latest iPad Air or iPad Pro running Apple’s M1 or M2 chips.

If you have one of these more premium tablets you will be able to use that new Stage Manager tool we mentioned earlier to unlock full external display support with resolutions of up to 6K. Via a USB-C cable, the iPad plugs straight into a screen turning the tablet into a mini desktop PC. This means users can arrange the ideal workspace, and work with up to four apps on iPad and four apps on the external display.

Here are all the tablets compatible with iPadOS 16.

“iPad is our most versatile device, and we’re excited to take what it can do even further with iPadOS 16,” said Craig Federighi, Apple’s senior vice president of Software Engineering. “With Stage Manager, which takes multitasking on iPad to a whole new level, plus new ways to share and collaborate via Messages, Safari, and the new Freeform app, and new pro features like Reference Mode and Display Zoom, users can get even more done on iPad.”