Windows 10 is now the only operating system that Microsoft officially supports. The firm’s older Windows 7 software has just been consigned to the history books with no more security updates or patches being released for this ageing OS.

If the news that your Windows 7 PC will now be much more vulnerable to cyber attacks wasn’t enough to make the switch then this latest update might just convince you.

Microsoft pushed out one final update to Windows 7 on January 14 but it seems it may have done more harm than good.

Numerous users are reporting that since downloading the latest upgrade their PC gets its usual desktop pattern replaced by something a little less colourful.

In fact, every time a machine is rebooted it appears that any existing wallpapers are replaced by a less than impressive black screen.

Posting a message on Microsoft’s forum page, one user said: “My PC just restarted after 7 support ended and my background is black.

“Even if I set a new background, it’s still black. Has anyone else experienced this? Is it some kind of group policy entry or registry key? (Before it auto-rebooted, I had my own background).”

JUST IN: Windows 10 has another problem and Microsoft may need to fix it quickly 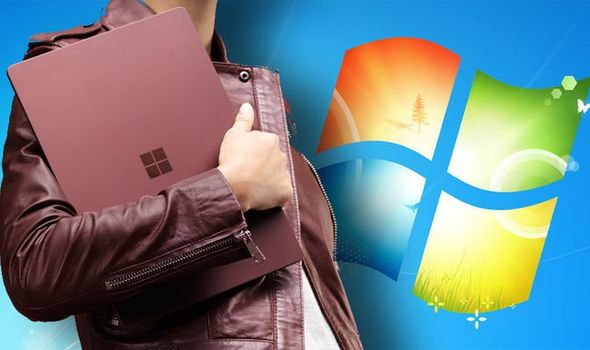 Windows 7 fans have also taken to Reddit to complain of the problems with one user asking: “Windows 7 wallpaper is now black. Does anyone else have this problem? What can I do about it?”

There’s no word from Microsoft on what causing the problem but according to Windows Latest, “if your screen has turned black after applying the patch, you should try out different wallpaper resolutions before uninstalling the update.”

If you are still using Windows 7 then now is a good time to consider upgrading.

Microsoft has issued some pretty stark warnings about the future of keeping this OS on your PC.

In a post on its support pages, Microsoft warned: “If you continue to use Windows 7 after support has ended, your PC will still work, but it will become more vulnerable to security risks and viruses. Your PC will continue to start and run, but you will no longer receive software updates, including security updates, from Microsoft.”

“To take advantage of the latest hardware capabilities, we recommend moving to a new PC with Windows 10.

“For most Windows 7 users, moving to a new device with Windows 10 will be the recommended path forward. Today’s PCs are faster, lightweight yet powerful, and more secure, with an average price that’s considerably less than that of the average PC eight years ago.”