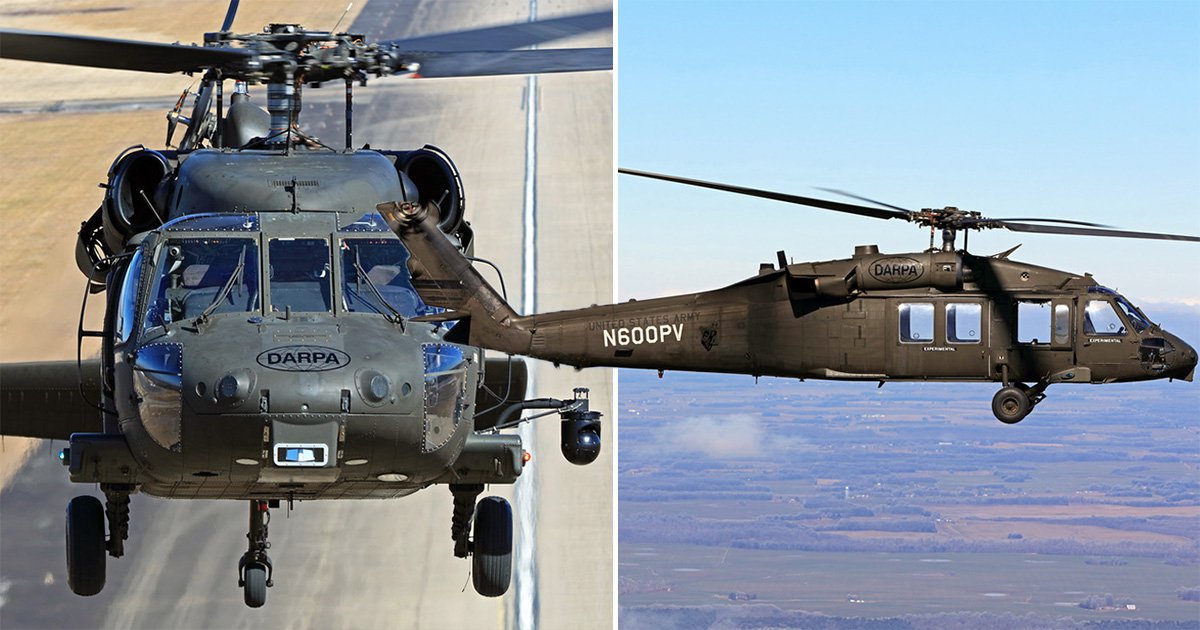 A formindable Black Hawk helicopter has been fitted with autonomous piloting software for the first time, allowing it to soar through the sky without anyone on board.

The deadly four-blade, twin-engine military chopper was filmed completing a 30-minute flight in the US this week with nobody on board.

The flight was the result of a partnership between Lockheed Martin Sikorsky which built the helicopter and the US Defence Armed Research Projects Agency (DARPA).

DARPA says it wants to put ‘removable kits’ into existing military aircrafts to ‘promote the addition of high-level automation’.

In this case, it’s known as the Aircrew Labor In-Cockpit Automation System (ALIAS) and the helicopter was also fitted with Sikorsky’s MATRIX autonomous technology.

All of which allowed it to take off, execute a series of pedal turns, maneurvers and straightaways and land all without any humans on board.

It is hoped that autonomous Black Hawk helicopters could undertake tasks such as flying supplies to war zones or carrying out rescue operations without putting pilots at risk.

A remote pilot was observing the flight and the multiple systems mean the Black Hawk can be flipped from piloted to autonomous mode at the flip of a switch.

This flight took place at Fort Campbell in Kentucky and, although conditions were perfect, an automomous chopper could also be deployed where visibility is poor or non-existent.

Benjamin Williamson, lead test pilot for the Fort Campbell event, said: ‘This capability will allow pilots to confidently switch back and forth between autonomy and piloted modes at any point of their mission with the literal flip of a switch.

‘This will support autonomous flight during a wide range of missions such as flight in degraded visual environments (DVE) and confined areas.

‘Most critically, ALIAS will be capable of automatically detecting and preventing dangerous situations that lead to accidents, thereby saving lives.’

Most autonomous systems used in aircraft only act as an assistant to pilots, but the ALIAS turned this Black Hawk fully autonomous. It wasn’t just able to handle the flight but also all the pre-flight procedures, including power, secondary control, wind checks and other elements.

It could also safely land the helicopter in the case of an emergency.

This historic Black Hawk flight marks the first time that a UH-60 has flown autonomously and builds on recent demonstrations at the U.S. Army’s Project Convergence 2021,’ a Lockheed Martin spokesperson said in a statement.

‘It illustrates how ALIAS-enabled aircraft can help soldiers successfully execute complex missions with selectable levels of autonomy – and with increased safety and reliability.’