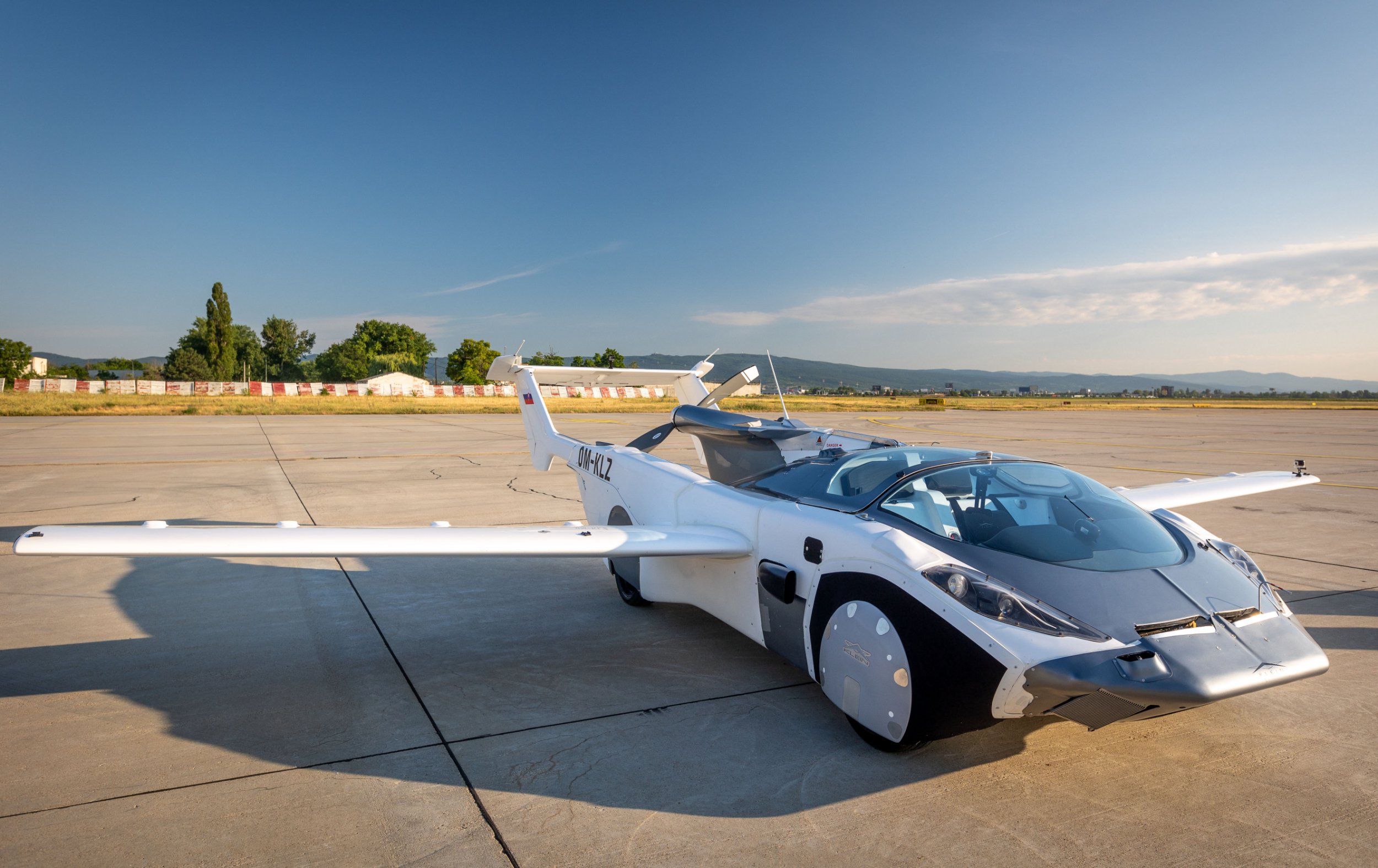 Fancy spicing up your daily commute?

A flurry of new launches suggest that very soon you’ll be able to do just that, as flying cars are nearly here!

We break down the road-going aircraft in development and soon to be taking us from the highway to the skyway.

This January, the Slovakian Klein Vision AirCar prototype was certified as an airworthy aircraft and it goes on sale next month with a starting price of £370,000.

The AirCar’s fuselage doubles as a road car with four wheels. The wings fold out hydraulically, a pusher propeller is installed in the extending tail and the whole thing converts from road to air mode in just two minutes and 15 seconds.

Styled like a sports coupe, its carbon body contributes 30% of its total lift when off the ground and it’s powered by a 1.6-litre BMW engine generating 140bhp.

The runway requirement is 300m, max altitude is more than 8,000ft and cruising speed is 105mph. Plans are already in motion to introduce a higher-performance derivative with a 3.2-litre 280bhp V6, which will increase flying range to 500 miles.

To celebrate the 60th anniversary of its iconic 4 hatchback (which is to France what the Mini is to Britain), Renault has collaborated with international mobility design hub The Arsenale to create a one-off VTOL (vertical take-off and landing) drone car.

The AIR4 has no wheels so it doesn’t actually drive. Instead, there are four two-blade propellers, one at each corner of the vehicle. The chassis sits in the middle of the rota frame. The pilot and passenger access the vehicle by lifting the reimagined Renault 4 shell, which is hinged at the front, and taking a seat in the stylishly utilitarian cabin.

Built on the Côte d’Azur and first tested from Monaco’s heliport last autumn, this vehicle is on sale for £2.95 million (so not for mere mortals). Payment must be made in crypto.

The AirCar’s main competitor will be the Slovakian Aeromobil, which has been in development since 1990 and is expected to debut, finally, in 2024 with a price of £1.27 million.

Now in its fourth prototype stage, this sleek-looking vehicle is powered by a hybrid Subaru boxer turbo engine and electric motor, generating over 300bhp.

Max road speed is 100mph and air speed is 160mph, with a 460-mile range. Like the AirCar, it can convert from road to air mode in under three minutes.

Standing for Personal Air and Land Vehicle, this Dutch two-seater has the comfort of a car, the agility of a motorcycle and, yes, the ability to fly.

Handling on the road is helped by a patented tilting system, while in the air it is equally easy to control and cannot stall. It can switch between flight and drive mode in ten minutes.

Because 165 metres of runway is required to go airborne, the PAL-V can’t always escape traffic jams, though. Yet because it’s designed for low altitude, commercial air traffic and fixed routes aren’t an issue.

On sale since 2018, the £425,000 machine has found its way into the hands of a wide range of customers, from cowboy-astronaut-millionaires to border patrol agencies.

How is this legal?

Drone vehicles such as the AIR4 require no pilot licence, whereas the Pal-V needs a private gyroplane licence, and full-on flying cars like the AirCar and Aeromobil require you to study for your wings in the same way you would to pilot a light aircraft.

As for driving on public roads, the machine needs a number plate and the DVLA will sort that.

The inventors not only require a certificate of airworthiness in the country of manufacture (Aeromobil’s is pending), they also need to register the ‘car’ as an approved M1 special purpose vehicle.

This paperwork allows the driver/pilot to take to the tarmac and the clouds but one still needs to obey the highway and airspace rules.