Virgin Media offers some of the fastest broadband speeds in the UK with customers now able to experience downloads at over 1Gbps – that’s fast enough to download an entire Hollywood blockbuster in HD in under a minute. However, even with Virgin’s network of fibre broadband, users should be aware of the variability in the network speeds they can expect.

Not every Virgin Media customer will experience exactly the same speeds – even if they pay for the same package. To try and explain exactly what speeds you should be getting from each of its broadband bundles, Virgin Media has shared a helpful chart which reveals everything about its broadband.

For example, someone who signs up to the basic M50 package should expect to see average speeds of between 53-55Mbps but Virgin also states that its minimum guaranteed download speed is 27Mbps meaning things can be slower at points during the day.

Those signing up to the faster M200 service can expect average speeds of between 212-218Mbps but again this can drop with Virgin stating that its minimum guaranteed download speed on this bundle 107Mbps.

The broadband firm says its advertised download and upload speeds for its Virgin Fibre packages are calculated by taking the median average, or the mid-point between the fastest and slowest speeds for each package at peak times (8-10pm), each month. 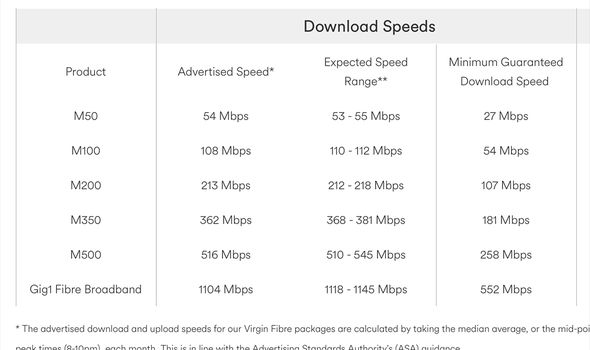 This means the actual speed you experience can be lower than estimated.

It’s also worth noting that things can be affected by issues out of Virgin’s control. This includes the devices you’re using, the wiring in your building and the number of users online and accessing a particular website.

Also, at peak times, high usage such as during major sporting events, may cause congestion and slow things down. If you think you’re not getting what you are paying for then it’s worth keeping a note of your download speeds via services such as speedtest.net.

If things fall below the minimum download speed guarantee for three consecutive days and Virgin is unable to fix the problem within 30 days, you may be able to leave your contract without paying an early disconnection fee. That goes for new customers or existing customers who change their broadband services on or after 28th February 2019. 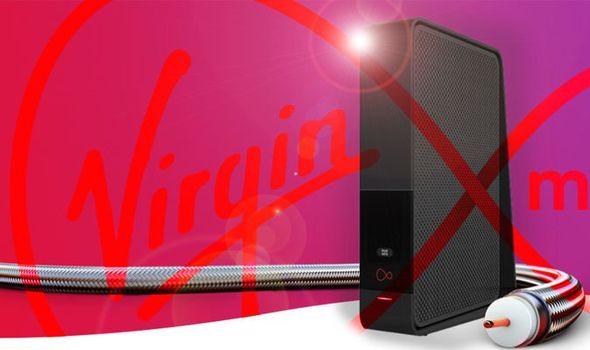 There are a number of things you can try to help boost things so if your broadband is struggling then here’s some top tips.

GIVE EVERYTHING A REBOOT

It may sound simple but sometimes it’s worth switching off your router for a few minutes. Leaving these devices on for long periods can mean they get clogged up with digital data and a quick reset can help to clear any congestion.

CHECK THE POSITION OF ROUTER

Placing your router in the right position can be vital if you want the very best signal beamed around your home. Virgin says it’s a good idea to put your router out in the open and away from anything that could block the signal.

If possible, it’s also important to raise it off the floor and keep it away from any other gadgets that might interfere with the connection.

WATCH OUT FOR FISH

Own a fish tank? Make sure your aquatic pets aren’t in the way of your router. It may sound daft water can seriously disrupt things when trying to get online. If you want the perfect signal then you’ll need to move the router or the fish tank depending on which is easier.