Back when GM got its taxpayer-funded bailout, a fun idea occurred to me: If GM is a ward of the government, then that makes GM-owned Corvette ZR1s government vehicles. Therefore, I should deliver the mail in a Corvette ZR1. This was more than a decade ago, which means I was way out in front on the project to replace our nation’s fleet of postal delivery vehicles.

The U.S. Postal Service itself is now getting around to that, in the (terrifying, distended) form of the Next Generation Delivery Vehicle.

My Vette idea was the kind that normally dissipates like so much bong smoke, but I actually followed through and asked my letter carrier at the time, Dan, if he wanted to attempt part of his route in the Vette. He said sure, so we threw his mail bag into the car and headed to a nearby residential street. It didn’t go well. Repeatedly getting in and out of a car that’s about two inches off the pavement is not what you’d call ergonomically ideal, particularly when you’re toting a large bag filled with credit card offers and Bed Bath & Beyond flyers. Also, the ZR1 averaged 2.9 mpg during its stint as a postal vehicle. It did look much cooler than a mail truck, but nonetheless the U.S. Postal Service failed to heed my recommendation and update its fleet with 638-horsepower Corvettes. 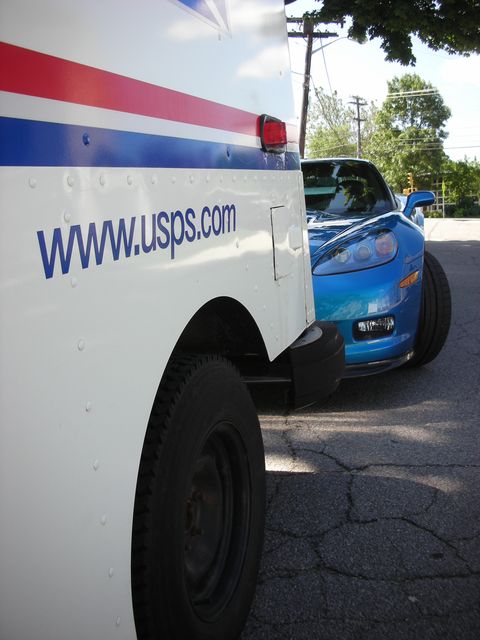 And the fleet does need updating. Our Grumman mail trucks look like they were supplied by the government of East Germany and they sound like the tortured exhalations of a hungover water buffalo—hhhhggggggggmmmmmggghhhh. Honey, the mail’s here.

Last year I got to meet my current postal carrier, Albert, when his ancient truck skipped its two-week notice and quit right in front of my house. Culprit: the ignition. “Regulations require us to shut off the engine and take the key with us when we have to get out of the truck,” Albert said as I nervously eyed the bulky Amazon box over on my front steps. “So when you do that thousands of times, going back to the ’80s, the ignition is going to break.” Albert called a colleague, who brought a replacement truck, and the two of them moved all the mail over the backup crapbox before the immobile one was winched over to a flatbed, shuddering pathetically as it dragged its locked rear tires across the pavement. Shortly thereafter, I installed an oversized mailbox so that Albert wouldn’t have to get out of the truck as often. I even considered canceling my Anvil of the Week subscription.

But mail carriers can’t count on every citizen to be so beneficent. Which is why it’s good that help is on the way, finally. The Next Generation Delivery Vehicle will be built by Oshkosh Defense, and it looks like robot Beluga whale—built by the East German government. It also reminds me of the baseball bullpen golf carts that were designed to look like motorized baseball hats. The first time I see one of these things, I’m not gonna know whether to get the mail or call in Rob Dibble for the last two outs in the ninth.

Why do we need a defense contractor to build a delivery van? Wait, don’t answer that. At least these new trucks will have air conditioning and airbags and be flexible enough to support internal combustion or electric propulsion. The contract runs 10 years and the first trucks hit the street in 2023, which means that, given the service life of postal trucks, we’re stuck with the NGDV for maybe 40 years. That’ll give us plenty of time to come up with pithy alternative meanings for “NGDV.” Like, “Notorious Glass Disgorges Vomit,” for example.

OK, well, we’ve got four decades to think of better ones. Or—my personal preference—reconsider the Corvette. The new one has two trunks.