SooooOOOoOOOOoOOooo, last night Prince Harry opened up to James Corden during a tour bus interview around Los Angeles. And while yeah, there was indeed some royal tea spilled, let’s talk about the cutest and most unexpected moment in the interview: James Corden FaceTimed Duchess Meghan Markle. 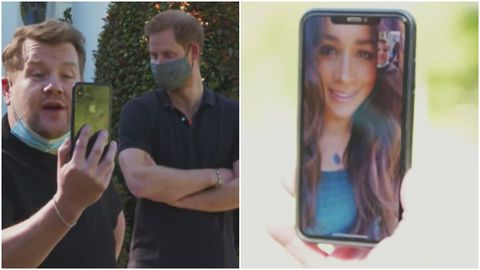 The moment went down when Prince Harry stopped to use the bathroom at the Fresh Prince of Bel-Air home, as one does, after which James called The Duchess of Sussex and tried to convince her that she and Harry should probably move into the house so she could be the Fresh Princess of Bel-Air.

In response, Meghan joked “I think we’ve done enough moving” before calling Harry “Haz,” to which James replied “Haz? I didn’t know we were calling you Haz now.” (Obviously, will be calling Harry Haz henceforth.) Anyway, do yourself a favor and watch the delightful exchange below:

FYI, Harry also opened up a bit about his and Meghan’s relationship, saying that “It was just the fact we hit it off with each other and we were just so comfortable in each other’s company.” He added, “We went from zero to 60 in the first two months.”

On top of that, Harry gave everyone an update on Baby Archie, saying “He is hysterical. He’s got the most amazing personality. He’s already putting three or four words together.”

You love all the deets on the royals. So do we! Let’s overanalyze them together.