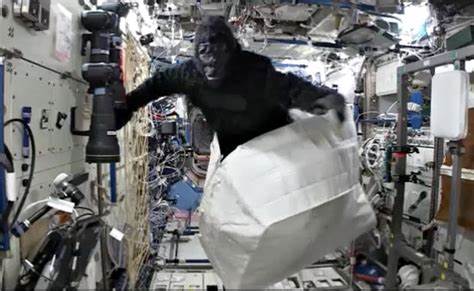 If you’ve ever wondered what astronauts do in their downtime aboard the International Space Station, we have the answer for you.

They dress up in a gorilla suit and scare the bejesus out of their crewmates.

At least, that’s what Nasa astronaut Scott Kelly did back in 2016 when he was aboard the orbiting space lab with non other than Britain’s Tim Peake.

Although a few years old, the story was brought back into the limelight this week when footage of Kelly drifiting about in the suit was shared on Twitter by filmmaker Todd Spence.

Subsequently retweeted over 20,000 times, Spence’s tweet gets a couple of things wrong – but it does capture the goofy side of usually-very-serious business of being an astronaut.

‘Astronaut Mark Kelly once smuggled a full gorilla suit on board the International Space Station,’ Todd tweeted. ‘He didn’t tell anyone about it. One day, without anyone knowing, he put it on.’

The gorilla suit was sent up on a resupply mission while Scott was aboard the ISS for a year in space. And after climbing into a soft-side storage container that was checked by Tim Peake, the video subsequently shows the first Brit aboard the space station being chased around by Kelly in full monkey mode.

‘Needed a little humor to lighten up a #YearInSpace. Go big, or go home. I think I’ll do both. #SpaceApe,’ Kelly tweeted at the time.

The experiment was Nasa’s first stab at a one-year spaceflight, a predecessor for Mars expeditions that would last two to three times as long.

Mark Kelly, meanwhile, has gone on to become the senator for the US state of Arizona.