I’m going to pose an intentionally provocative question: What if smartphones are so successful and useful that they are holding back innovation?

Technologists are now imagining what could be the next big thing. But there may never be anything else like the smartphone, the first and perhaps last mass market and globally transformative computer. 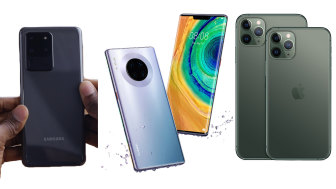 Smartphones have succeeded to the point where it’s hard to imagine alternatives.

I may wind up looking like a 19th-century futurist who couldn’t imagine that horses would be replaced by cars. But let me make the case that the phenomenon of the smartphone may never be replicated.

First, when people in technology imagine the future, they’re implicitly betting that smartphones will be displaced as the centre of our digital lives by things that are less obvious — not slabs that pull us away from our world but technologies that are almost indistinguishable from the air that we breathe.

Virtual reality goggles are bulky annoyances now, but the bet is that tech like VR or computers that can “learn” like people will eventually blur the line between online and real life, and between human and computer, to the point of erasure. That’s the vision behind the “metaverse,” a broad vision that virtual human interactions will be as complex as the real thing.

The allure of these devices in our lives and in technologists’ imaginations is so powerful that any new technology now has to exist almost in opposition to the smartphone.

Perhaps you’re thinking that more immersive and human-ish technologies sound intriguing, or maybe they seem like the woo-woo dreams of kooks. (Or maybe a little of both.) Either way, technologists must prove to us that the future they imagine is more compelling and useful than the digital life that we already have thanks to the magical supercomputers in our pockets.

The challenge for any new technology is that smartphones succeeded to the point where it’s hard to imagine alternatives. In a sales boom that lasted about a decade, the devices transformed from a novelty for rich nerds to the only computer that billions of people around the world have ever owned. Smartphones have succeeded to the point where we don’t need to pay them much notice. (Yes, that includes the incrementally updated iPhone models that Apple talked about on Tuesday.)

The allure of these devices in our lives and in technologists’ imaginations is so powerful that any new technology now has to exist almost in opposition to the smartphone.

When my New York Times colleague Mike Isaac tried Facebook’s new model of glasses that can snap photos with a tap on the temple, a company executive said to him: “Isn’t that better than having to take out your phone and hold it in front of your face every time you want to capture a moment?”

I get the executive’s point. It’s true that devices like the Apple Watch, Facebook’s glasses and Snap’s Spectacles are clever about making features of smartphones less obtrusive. Companies including Facebook, Snap and Apple are also working on eyewear that — like the failed Google Glass — aims to combine digital information like maps with what we see around us.

The comment also shows that any new consumer technology will have to answer the inevitable questions: Why should I buy another gadget to take photos, flip through cycling directions or play music when I can do most of that with the smartphone that’s already in my pocket? Do I need to live in the metaverse when I have a similar experience in the rectangular screen of my phone?

Smartphones are unlikely to be the apotheosis of technology, and I am curious to see the development of technologies that want to move away from them.

But at least for now, and maybe forever, most technologies for our daily lives are supplements to our phones rather than replacements. These tiny computers may be so darn handy that there will never be a post-smartphone revolution.

The Market Recap newsletter is a wrap of the day’s trading. Get it each weekday afternoon.