BT and Sky TV are rivalling one another with some perfectly timed price cuts. With the football season set to restart next week, both firms are offering ways to watch the action at a fraction of the usual costs. This is great news for anyone looking to drop the price of their monthly bill – but what’s the difference between the competing deals?

BT announced at the weekend that it has launched a very tempting discount for its broadband customers, which will allow them to access the latest sports at half the price. Yes, the deal offers a whopping 50 percent off the firm’s Big Sport package and drops the price from £40 down to just £20 per month.

Sky is offering a similarly competitive “early bird” deal, which offers customers the chance to watch all of the upcoming action for £39 per month – saving £9.

This bundle includes standard Sky TV along with every Sports channel so customers will not only get to watch all of the latest football action but also the return of Formula One, cricket and golf. 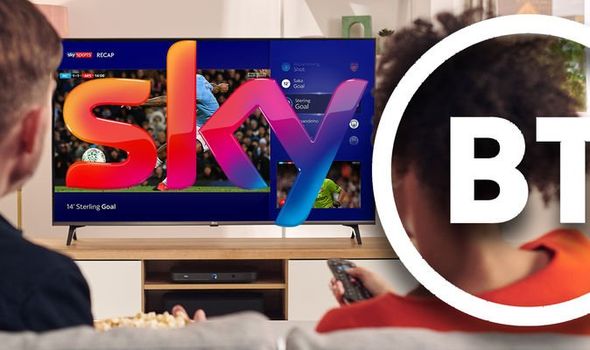 It’s worth remembering that both of the deals above require users to sign up to lengthy 18/24-month contracts so make sure you are happy to pay this amount of money for the foreseeable before hitting the Buy button ahead of the games next week.

As well as offering cheaper pricing, both BT and Sky say they have some innovative ways of tuning in.

In the coming weeks, BT Sport says it will be launching ‘Watch Together’, an exciting new social innovation, allowing customers using the BT Sport App to watch, see and chat with friends in a split screen, while the match is being played.

And the broadcaster will also continue to make the majority of games available using the latest broadcast technology, offering the best pictures and sound available in 4k HDR with Dolby Atmos and in 360° on the BT Sport App.

Not to be outdone, Sky says it has teamed with EA SPORTS FIFA to created bespoke and team-specific crowd noise and chants to replicate the vibrant atmosphere of Premier League clashes, so fans don’t miss out on the audio that goes with the action.

There’s also Sky Sports Recap which helps to make sure fans don’t miss any action and Sky Sports Fanzone where fans will be able to watch select matches with friends in a video room and interact while the action unfolds.

All of these features are set to appear on Sky boxes in the coming days.