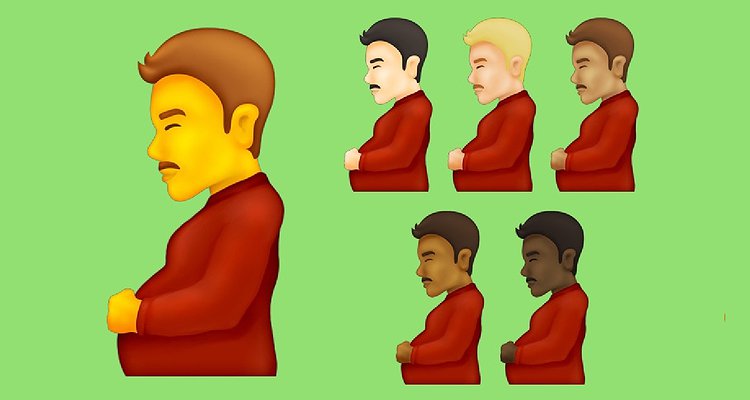 A pregnant man and a multi-racial handshake are among the new draft emojis proposed for launch later this year by the icons’ oversight organisation, the Unicode Consortium.

The pregnant man and pregnant person emoji are joined on the list by a person with crown icon as part of efforts to further boost the gender-inclusive nature of emojis.

The proposals would mean gender-neutral versions of almost every emoji would be available, developers said, while the update to the handshake emoji which allows users to choose a range of skin tones for both hands would further improve race representation in the icons.

The list of suggested icons has been published ahead of World Emoji Day on Saturday.

Emojipedia, the reference website and a voting member of the Unicode Consortium, said the new pregnant emoji recognise ‘that pregnancy is possible for some transgender men and non-binary people’.

The final list of approved emoji will be announced in September as part of Emoji 14.0 and is expected to roll out to the public in 2022.

‘It is yet to be confirmed which emojis are in the final version of Emoji 14.0. The final version is likely to resemble this draft list, and no new emojis will be added at this stage,’ Emojipedia said.

‘But there’s always a remote possibility of a change or removal ahead of September.’

Imaging fearing for your grandchildrenâs future because of a pregnant man emoji and not because of climate change.

The draft emoji list also includes a coral icon for the first time, which Emojipedia said was a common symbol around the discussion of climate change, and is joined by a range of new versions of the popular yellow face emoji, including a melting face, saluting face, the face holding back tears and a face that cannot bear to watch.