Nokia Oyj is leading a group of companies and universities in a European Union funded wireless project called Hexa-X to help jump-start a new generation of mobile technology that's already being called 6G.

The group includes wireless gearmaking-peer Ericsson, mobile carriers Orange and Telefonica SA, and technology companies including Intel and Siemens. They're joined by the University of Oulu and the University of Pisa, according to the membership list. 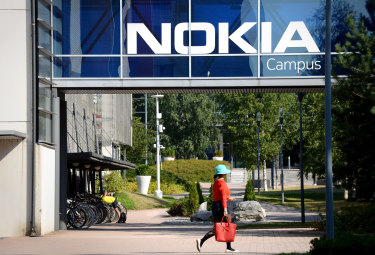 6G technology is expected to use super high-frequency terahertz airwaves and deliver advanced connectivity, which could even link up to technology in the human body and brain – as well as real-time holographic imaging – starting in 2030.Credit:AP

While 5G network deployment is still in its infancy, with 100 wireless carriers worldwide offering the service in limited areas, the preparation for 6G development is getting started in several regions around the world.

In addition to Nokia-led Hexa-X in Europe, there's Next G Alliance and O-RAN Alliance in the U.S. The Chinese government is also funding a 6G development group.

6G technology is expected to use super high-frequency terahertz airwaves and deliver advanced connectivity, which could even link up to technology in the human body and brain – as well as real-time holographic imaging – starting in 2030.

Devaki Chandramouli is Nokia's head of North American standardisation and is one of the engineers leading 6G development with the Next G Alliance. She says she wants to establish three objectives initially.

"The main goal will be to develop the vision, the road map and the timeline," she said. "Then put together a timeline for the technology direction. And the third point is to facilitate the interaction with US government agencies to fund the research and also provide the input for the technology development."

Also on Monday, Finland introduced a telecommunications law which may be used to exclude China's Huawei and ZTE from its networks.

Finland's parliament approved the bill designed to protect its networks against cyber threats and espionage in Helsinki. The legislation names no specific companies or countries, but bans equipment "within the network's key assets if there are strong grounds to suspect the use of such equipment would endanger national security or defence."

"We aren't pointing fingers at any one party," Johannes Koskinen, a lawmaker from the ruling Social Democratic Party, said by phone when asked whether the law was directed specifically at Chinese companies. "We should ensure we don't take action that closes doors for Nokia as a result of any backlash," he said.