Combining the latest Android software with well-balanced hardware that favours the important things like display and camera, the Nokia 7.1 is four fifths of a flagship phone at half the price.

With Google having long abandoned its mid-range Nexus line in favour of the high-end Pixel, HMD Global clearly wants its Nokias to fill the void with a phone that punches above its weight and delivers a fast, clutter-free vanilla version of Android, and the 7.1 does that very well. 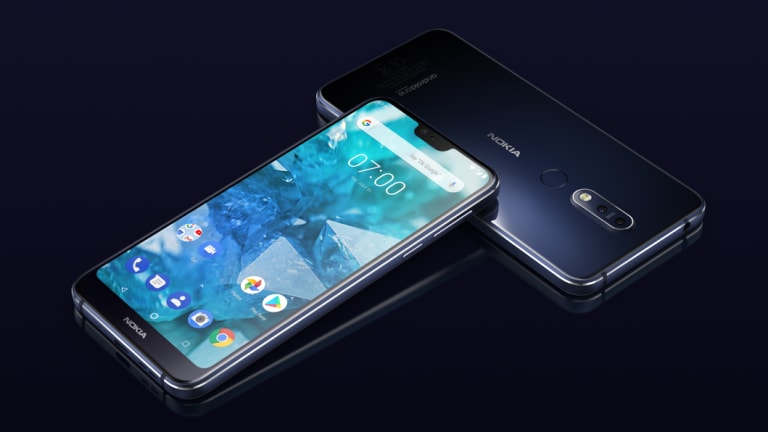 The Nokia 7.1 included Android 8.1 when it lunched last year, but it’s now one of the first non-Google phones running Android 9.

The $499 device impresses right out of the box with a look and feel borrowed straight from the 2018 flagship playbook. There's Gorilla Glass front and back, sandwiching an aluminum frame with chamfered edges and nice matte blue sides. On the front the display features relatively small bezels, covering the whole front of the device save for a bit of a chin at the bottom and a shallow notch up top. The rear of the phone is very Nokia with a vertically-oriented camera stack and the standard round fingerprint sensor.

The phone is comparable in size to the Pixel 3 and is comfy and solid in the hand, though there's more screen here than on Google's phone, with the Nokia's 5.84-inch display closer in size to that of the iPhone XS.

I was most impressed with the quality of the 7.1's screen given the phone's price; this is a 1080 x 2280 LCD panel up there with the nicest of its kind. Nokia doesn't have the software to make the display pop quite as much as a Sony phone or Apple's iPhone XR, but this is still a bright and beautiful LCD.

Good 1080p video content looks amazing, and the tall 19:9 screen ratio is handy for more cinematic formats too. The display is HDR capable, and native HDR content looks very nice. Unfortunately Netflix doesn't appear to support HDR on the 7.1 at the moment, but that could change with an update.

One of the biggest advantages the 7.1 has is that it's enrolled in the Android One program, meaning the operating system and software is supplied directly by Google. With HMD taking a hands-off approach to the software (the only non-Google stuff I spotted was the Camera and Support apps), the phone runs a clean version of Android 9 Pie that comes very close to what you get on a $1200+ Pixel phone.

Google's apps, of course, are all top notch, so there's none of the weird budget Gallery apps or email clients you often find on cheaper phones. You even get the Pixel-style ambient display, although since this is not an OLED screen you only see it when you get a notification or physically lift the phone, for the battery's sake. Google guarantees the 7.1 will get three years of monthly security updates and two years of OS updates, and it will likely get them before the LGs and Samsungs of the world.

Under the hood there's a Snapdragon 636 chip and 3GB of RAM. This is far less powerful than what you'd find in a top of the range phone, but then it's pushing fewer pixels than something like the Galaxy Note9 as well. It's enough to navigate the phone with motion and animations almost (but not quite) as smooth as you get on a Pixel 3, and it's more than enough to crush everyday tasks like browsing the internet or editing documents.

Even in more advanced apps and games I was hard pressed to spot the 7.1 chugging or stumbling. Relatively fast 3D games like Riptide Renegade are totally acceptable here, although obviously the 7.1 won't compete with a new $1000 phone when it comes to processing complex graphics or multitasking.

As usual Nokia has partnered with ZEISS Optics for the cameras, and it's an impressive if no-frills setup. The main 12MP shooter produces bright, sharp, Instagram-worthy images as long as you have plenty of light, but the lack of optical stabilisation means low light performance is just ok. Autofocus, meanwhile, is fast and reliable.

There's a 5MP monochrome camera as well which helps measure depth so you can get that all-important faux-bokeh portrait mode, and it works really well. Video is clean and goes up to 4K (but use an SD card, because the 7.1 only has 32GB of built-in storage), while the 8MP selfie camera is not particularly impressive but does the job.

While the cameras nail the fundamentals there's no 60fps video or super slow-mo, no fancy zooms or night modes that you might find on a flagship. I also find HMD's camera app to be too crowded; like a juiced up version of the iPhone app. The top / left of the screen is filled with icons for options I'll never use, including bad Snapchat-style filters and the signature Nokia "Bothie" view, which shows feeds from both the front and back camera at once. At least livestream junkies will be able to broadcast to YouTube and Facebook showing both their view and their reaction at the same time, no editing needed.

Elsewhere the phone ticks all the boxes for a mid-range phone. The battery will get you through a full day but not much more, with USB-C fast charging getting you from zero to 50 per cent charge in about half an hour. The single down-firing speaker is loud and sounds good. There's a headphone jack. The earpiece and mic make for good call quality.

Of course if you're coming from a very expensive phone you will notice some familiar mid-range phone compromises here. Colour accuracy on the display is not fantastic, with a noticeable blue tint to the whites. Volume to wired headphones is pretty low, and the Bluetooth connection is less resilient to interference than on a higher-end phone. There is no water resistance spec.

Still, it's silly to compare the 7.1 to the high end when it comes with less than half the asking price. Compared to other phones in the price range the 7.1 isn't the biggest or the fastest, but I'm prepared to say that it is the nicest. With an incredible display and design, good battery life and a great camera, it has the bulk of the benefits you look for in a flagship phone while cutting back on things like performance and fancy video tricks.

But the software is the biggest selling point here. There are a few Android tricks that Google keeps for itself, like its fancy moving wallpapers and unlimited full-res photo storage, but for all intents and purposes using the Nokia 7.1 is like using a Pixel phone. It's clean, reliable and intuitive, and for some it will be tough to argue that the extra bit of power and sophistication you get with a Pixel 3 is worth another $700.