Last month Apple resurrected the iPad Air and iPad Mini, filling out the space in its current tablet offering between the lowest and highest ends.

In many ways this new iPad Air is the previous generation iPad Pro released under a new name. Because of that, I’m guessing many reviewers will write off the device as a boring release. But I’m happy to see a flagship device from Apple or any other company so quickly morph into a product I can actually afford. 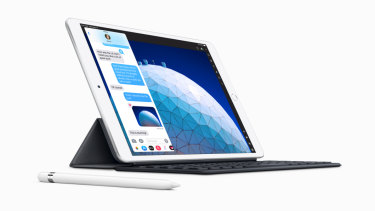 The 2019 iPad Air has all the best bits from 2017’s iPad Pro, which I wrote at the time was “the best iPad Apple has made”. It has the same 10.5” form factor, giving you just a little more space on screen versus the basic iPad. More importantly this allows the optional Smart Keyboard to be full size and comfortable to type on. There’s also support for the first generation Apple Pencil; and while support for the fancy new wireless charging Pencil would be nice, that would require a complete redesign of the case, and those cost savings have to come from somewhere.

The screen features the same P3 wide colour gamut, with a laminated display so there’s no gap between the glass and the image below. Apple’s True Tone adjusts the colour temperature of the screen to the room you’re in, which makes the iPad Air easier on the eyes after heavy usage. When it comes to the display, the only thing missing is the 120MHz refresh rate.

With Apple’s in-house A12 chip on board, the iPad Air even has a performance boost over the previous generation iPad Pro. You probably won't notice, now that even the entry level iPad has far more power than most people need, but as we tend to hold on to iPads much longer than phones or computers you’ll appreciate that extra grunt in the long run.

One of my big criticisms of Apple’s laptop line is there is so much overlap in features, price and performance that it is hard to recommend a model for most people. In contrast, 2019’s iPad line up makes so much sense, with a natural progression from the entry level iPad at $469, the new Mini at $599, this new Air at $779, and the iPad Pro which starts at $1229.

Simply; the entry level iPad is better than every non-Apple tablet on the market, and if you’re looking for a big screen to watch Netflix or browse the web on the couch, that’s the iPad for you. If you want smaller, go for the Mini. The iPad Pro will always be the best tablet Apple can make, with bleeding edge technology inside a fantastic design, but that means you’re paying for the research and development costs of each new feature, and unless you can ditch a traditional computer and work only on an iPad, the Pro will feel like overkill.

Now we have the new iPad Air sitting somewhere in between, as luxury you can probably afford.