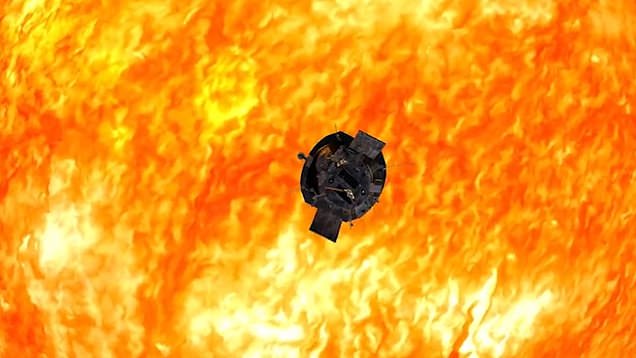 For the first time in history, a Nasa spacecraft has ‘touched’ the sun.

On 28 April 2021, Nasa’s Parker Solar Probe flew into and through the solar corona, the Sun’s outer atmosphere.

The sun remarkably does not have a solid surface. Instead, something called the Alfvén critical surface separates the sun’s atmosphere from the outer region of space.

In 1942, Swedish physicist Hannes Alfvén proposed the theory behind the boundary in a paper and scientists have been looking for it ever since.

Until now, researchers were unsure exactly where the Alfvén critical surface lay.

It took several months for the Parker Probe mission scientists to download and analyse the data it collected, to be sure that the spacecraft had indeed crossed the Alfvén surface.

The Parker Solar Probe mission cost $1.5 billion, and features a carbon-composite heat shield protecting its instruments from the soaring temperatures.

The sun’s surface temperature is reportedly about 6,000 degrees Celsius but the corona in the sun’s atmosphere gets much hotter by millions of degrees.

Nasa announced the milestone yesterday, on December 14, saying that it provided scientists deeper insights into our sun’s evolution and that of the stars in the rest of the Universe.

Launched in 2018, the Parker Solar Probe’s main objective was to investigate the solar corona in a planned seven-year mission.

Three years after its launch, Parker has finally made it to the sun’s surface.

During its seven-year mission, the Parker Probe is scheduled to make a total of 26 close approaches, or perihelions, to the sun, using seven gravity assist manoeuvres from Venus to bring it even closer.

The April perihelion was the eighth, and the first to actually make it to the sun’s corona.

The Parker Probe spent nearly five hours inside the solar atmosphere, measuring fluctuations in the Sun’s magnetic field and even sampled particles. Up until now, scientists have relied on external information to estimate these properties.

‘Flying so close to the Sun, Parker Solar Probe now senses conditions in the magnetically dominated layer of the solar atmosphere – the corona – that we never could before,’ said astrophysicist Nour Raouafi, Parker project scientist at the Johns Hopkins Applied Physics Laboratory.

Scientists were able to pick up magnetic field data, solar wind data, and visual images from the probe.

‘Humanity has touched the Sun,’ she said during a press conference at this week’s American Geophysical Union meeting in New Orleans, Louisiana.

The spacecraft passed into the corona for nearly five hours and then back out again, and might have crossed into it briefly twice more. Inside the corona, the solar wind speed and plasma densities dropped, suggesting the boundary had indeed been crossed.

Knowledge of solar features like switchbacks and how they influence solar winds, the flow of particles from the sun that can influence us at Earth, and other eruptions of charged particles, will help people here better prepare for disruptive space weather, such as when solar storms knock out satellite communications.

The mission’s closest approach is scheduled for 2025 at a distance of just 6.2 million kilometres from the solar surface.