Last Wednesday, a message appeared in a new WhatsApp channel called “Death to the Arabs.” The message urged Israelis to join a mass street brawl against Palestinian citizens of Israel.

Within hours, dozens of other new WhatsApp groups popped up with variations of the same name and message. The groups soon organized a 6 p.m. start time for a clash in Bat Yam, a town on Israel’s coast.

“Together we organize and together we act,” read a message in one of the WhatsApp groups. “Tell your friends to join the group, because here we know how to defend Jewish honor.”

That evening, live scenes aired of black-clad Israelis smashing car windows and roaming the streets of Bat Yam. The mob pulled one man they presumed to be Arab from his car and beat him unconscious. He was hospitalized in serious condition.

The episode was one of dozens across Israel that the authorities have linked to a surge of activity by Jewish extremists on WhatsApp, the encrypted messaging service owned by Facebook. Since violence between Israelis and Palestinians escalated last week, at least 100 new WhatsApp groups have been formed for the express purpose of committing violence against Palestinians, according to an analysis by The New York Times and FakeReporter, an Israeli watchdog group that studies misinformation.

The WhatsApp groups, with names like “The Jewish Guard,” have added hundreds of new members a day over the past week, according to The Times’s analysis. The groups, which are in Hebrew, have also been featured on email lists and online message boards used by far-right extremists in Israel.

While social media and messaging apps have been used in the past to spread hate speech and inspire violence, these WhatsApp groups go further, researchers said. That’s because the groups are explicitly planning and executing violent acts against Palestinian citizens of Israel, who make up roughly 20 percent of the population and live largely integrated lives with Jewish neighbors.

That is far more specific than past WhatsApp-fueled mob attacks in India, where calls for violence were vague and generally not targeted at individuals or businesses, the researchers said. Even the Stop the Steal groups in the United States that organized the Jan. 6 protests in Washington did not openly direct attacks using social media or messaging apps, they said.

The proliferation of these WhatsApp groups has alarmed Israeli security officials and disinformation researchers. In the groups, attacks have been carefully documented, with members often gloating about taking part in the violence, according to The Times’s review. Some said they were taking revenge for rockets being fired onto Israel from militants in the Gaza Strip, while others cited different grievances. Many solicited names of Arab-owned businesses they could target next.

“It is a perfect storm of people empowered to use their own names and phone numbers to openly call for violence, and having a tool like WhatsApp to organize themselves into mobs,” said Achiya Schatz, director of FakeReporter.

He said his organization had reported many of the new WhatsApp groups to the Israeli police, who initially took no action “but now are starting to act and try to prevent the violence.” 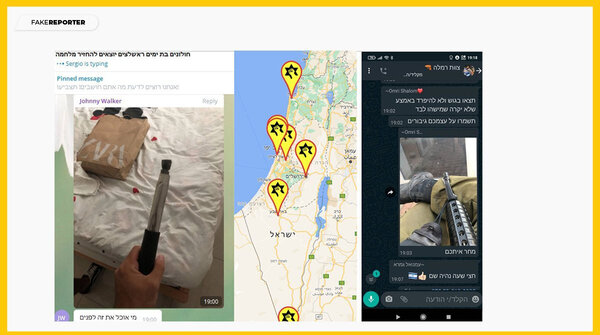 Micky Rosenfeld, a spokesman for the Israeli police, said, “Police are tracking social media and monitoring movements on the ground.” He said that while Israelis have been involved in some attacks, they were largely “protecting themselves” against attacks by Palestinian citizens of Israel. He added, “Police investigations are continuing.”

Israeli security officials said law enforcement authorities began monitoring the WhatsApp groups after being alerted by FakeReporter. The police, Mr. Schatz said, believed attacks by the Jewish extremists were inflamed by and organized on the WhatsApp groups.

One official, who spoke on the condition of anonymity, added that the police had not seen similar WhatsApp groups forming among Palestinians. Islamist movements, including Hamas, the militant Palestinian organization that controls the Gaza Strip, have long organized and recruited followers on social media but do not plan attacks on the services for fear of being discovered.

A WhatsApp spokeswoman said the messaging service was concerned by the activity from Israeli extremists. She said the company had removed some accounts of people who participated in the groups. WhatsApp cannot read the encrypted messages on its service, she added, but it has acted when accounts were reported to it for violating its terms of service.

“We take action to ban accounts we believe may be involved in causing imminent harm,” she said.

In Israel, WhatsApp has long been used to form groups so people can communicate and share interests or plan school activities. As violence soared between Israel’s military and Palestinian militants in Gaza over the past week, WhatsApp was also one of the platforms where false information about the conflict has spread.

Tensions in the area ran so high that new groups calling for revenge against Palestinians began emerging on WhatsApp and on other messaging services like Telegram. The first WhatsApp groups appeared May 11, Mr. Schatz said. By last Wednesday, his organization had found dozens of the groups.

People can join the groups through a link, many of which are shared within existing WhatsApp groups. Once they have joined one group, other groups are advertised to them.

The groups have since grown steadily in size, Mr. Schatz said. Some have become so big that they have branched off into local chapters that are dedicated to certain cities and towns. To evade detection by WhatsApp, organizers of the groups are urging people to vet new members, he said.

On Telegram, Israelis have formed roughly 20 channels to commit and plan violence against Palestinians, according to FakeReporter. Much of the content and messaging in those groups imitates what is in the WhatsApp channels.

On one new Telegram channel that The Times reviewed, “The Revenge Troops,” people recently shared instructions for how to build Molotov cocktails and makeshift explosives. The group asked its 400 members to also provide addresses of Arab-owned businesses that could be targeted.

In another group with just under 100 members, people shared photos of guns, knives and other weapons as they discussed engaging in street combat in mixed Jewish-Arab cities. Another new WhatsApp group was named “The unapologetic right-wing group.”

After participating in attacks, members of the groups posted photos of their exploits and encouraged others to mimic them.

“We destroyed them, we left them in pieces,” said one person in “The Revenge Troops” Telegram channel, alongside a photo showing smashed car windows. In a different group, a video was uploaded of black-clad Jewish youths stopping cars on an unnamed street and asking drivers if they were Jewish or Arab.

We beat “the enemy car-by-car,” said a comment posted underneath the video, using an expletive.

Over the weekend, Prime Minister Benjamin Netanyahu of Israel visited Lod, a mixed Jewish-Arab city in central Israel that has been the scene of recent clashes.

“There is no greater threat now than these riots, and it is essential to bring back law and order,” said Mr. Netanyahu.

Within some of the WhatsApp groups, Mr. Netanyahu’s calls for peace were ridiculed.

“Our government is too weak to do what is necessary, so we take it into our own hands,” wrote one person in a WhatsApp group dedicated to the city of Ramle in central Israel. “Now that we have organized, they can’t stop us.”