On the outside, Apple’s new AirTag looks like a ho-hum product that we have all seen before. It’s a disc-shaped tracking gadget that can be attached to items like house keys to help you find them.

But inside, the story gets far more interesting.

The AirTag, which Apple introduced last week, is one of the first consumer electronics to support a new wireless technology, ultrawideband, which lets you detect precise proximity between objects. Using ultrawideband, your iPhone can sense whether an AirTag is an inch or dozens of feet away from it. It’s so accurate that its app will even show an arrow pointing you in the direction of the AirTag.

That’s far better than other trackers that rely on Bluetooth, an older wireless technology that can only roughly guess an item’s proximity. (More on how this all works later.)

Using ultrawideband to find lost items is just one early example of what the technology can do. Because of its pinpoint-precise ability to transfer data quickly between devices, ultrawideband could become the next wireless standard that succeeds Bluetooth. It could lead to better wireless earphones, keyboards, video game controllers — you name it.

“This is the tip of the iceberg,” Frederic Nabki, chief technology officer of Spark Microsystems, a Montreal firm that is developing ultrawideband technology, said of trackers like the AirTag. “It sends its data really, really fast.”

I tested Apple’s $29 AirTag, which will be released on Friday, for about a week. I used the tracker to find house keys, locate my dogs and track a backpack. I also ran similar tests with Tile, a $25 tracker that relies on Bluetooth and that has been around for about eight years.

Last week, Tile complained in an antitrust hearing that Apple had copied its product while putting smaller companies at a disadvantage. From my tests comparing AirTag and Tile, I found that ultrawideband was far superior to Bluetooth for finding items. What’s more, the AirTag demonstrated that ultrawideband is next-generation tech that is worth getting excited about.

Here’s what you need to know.

How ultrawideband and Bluetooth work

Ultrawideband has been in development for more than 15 years, but it was built into chips for iPhones and other smartphones only in the last two years.

When you use ultrawideband to find a tracker, it works similarly to sonar, which detects objects underwater. You send a ping to the tag, and the tag bounces a ping back to your phone. The amount of time it takes for the ping to come back is used to calculate the distance between the two objects.

But when you use Bluetooth to find a tracker, your phone is pushing out a continuous signal in search of it. The farther you move away from the tracker, the weaker the signal gets, and the closer you move toward it, the stronger it becomes. This technique is used to tell you roughly how far away you are from the tracker. 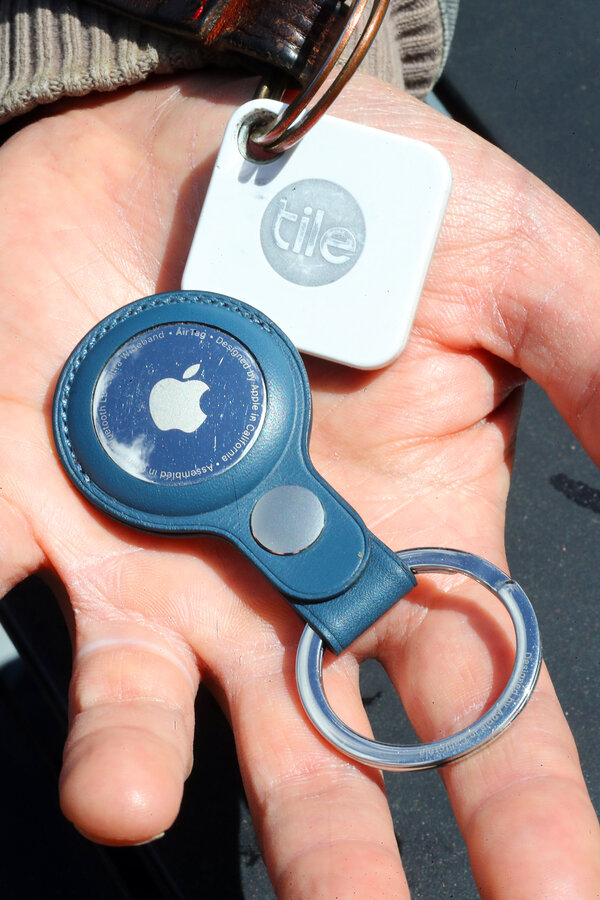 So what do the two underlying wireless technologies mean in practice?

Tile works with both iPhones and Android phones using Bluetooth technology to find items. Open the Tile app, select an item and hit the “find” button. The app will look for the Tile and send a signal to connect, after which it makes the tracker play a melody. If the signal connection is weak, it will tell you to move around until the signal gets stronger.

If your phone can’t find a Tile because it is outside its range, you can put it in “lost mode.” The tracker will search for other Tile owners who have granted the Tile app access to their location to help find other people’s lost items. If a Tile-owning Samaritan is near your Tile, that person’s device will share its location with the Tile network, which will show where the item was last spotted on a map.

Apple’s AirTag works with iPhones both new and old. Newer devices (the iPhone 11 and 12 series) can take advantage of ultrawideband’s precise locator abilities. To find an item, you open the Find My app, select an item and tap Find. From there, the app will form a connection with the AirTag. The app combines data gathered with the phone’s camera, sensors and ultrawideband chip to direct you to the tag, using an arrow to point you to it. Older iPhones can track AirTags with Bluetooth using a method similar to Tile’s.

Similar to Tile, when an AirTag is lost and outside the range of your phone, you can put it in lost mode and allow other Apple phones to find the AirTag to help you see where the item was last spotted on a map.

The benefits of ultrawideband could easily be seen in a few tests.

For one experiment, I asked my wife to hide several AirTags and Tiles throughout our home and then time how long it took me to find them.

In one test, she hid an AirTag attached to my motorcycle key somewhere in our bedroom. Apple’s Find My app used an arrow to point me toward the mattress, and I pressed a button to make the tag play a sound. After rummaging through the covers and peeking under the bed, I found the AirTag crammed under the mattress. It took about 90 seconds.

Next, I had to find a Tile attached to my house key. I opened the Tile app and hit the Find button. The app said the signal was weak and suggested I walk around to find a stronger connection. As I moved downstairs, I could hear the Tile’s melody, and the app said the signal was getting stronger. I found the Tile hidden inside a bin in a garage locker. It took about a minute.

The toughest was an AirTag hidden inside a book. Apple’s Find My app pointed toward the correct shelf, but it couldn’t tell me precisely which book the tag was shoved inside. After removing four books from the shelf and flipping through pages, I found the AirTag inside a cookbook. This provided my wife with three minutes of entertainment.

Separately, to test how the trackers worked when they were too far from my phone, I attached a Tile and an AirTag to both of my dogs’ collars and put the tags in lost mode when my wife took them for a walk. Nearby smartphones eventually helped me locate both trackers to show me where the dogs were in the neighborhood.

Even though the AirTag is an impressive demonstration of ultrawideband technology, that doesn’t make it the best tracker for everyone.

Because of the AirTag’s compatibility with Apple products, I would give an AirTag to an iPhone owner. But I would give a Tile to a person with an Android phone.

The AirTag is also far from perfect. I wish they were louder — they are very quiet compared with Tiles — so playing sound wasn’t very helpful for finding them. I also did not love that for most purposes, the AirTag requires buying a separate accessory, like a key ring, to hold the tracker.

In contrast, the Tile has a hole punched into its corner to attach to a key ring or zipper head. (The $29 price tag of the AirTag is eclipsed by Apple’s $35 leather key ring.)

Still, ultrawideband gives AirTag a major advantage — and even Tile thinks so. CJ Prober, Tile’s chief executive, said last week that Apple had refused to give his company access to the iPhone’s ultrawideband chip to make its own trackers that work with it.

“They launched a competing product, and they’re leveraging that technology that allows it to do things that our product can’t,” Mr. Prober said in an interview. “We really think competition should be fair. Fair competition leads to better outcomes for consumers.”

Apple said in a statement that it had worked hard to protect the privacy of iPhone users’ location data, adding that it embraced competition. This month, it announced that it would soon release a plan for other companies to take advantage of the ultrawideband technology inside Apple devices.

I’m happy to wait for those products using this neat wireless technology.

Because of its greater efficiency at transmitting data, ultrawideband could make future wireless devices immensely better, Mr. Nabki said. As an example, he cited cord-free earphones that connect instantly, use very little battery and sound as good as wired ones.

That sounds much cooler than finding house keys.