San Francisco: Microsoft is in talks to acquire TikTok, the Chinese-owned video app, according to a person with knowledge of the discussions, as President Donald Trump said he was considering taking steps that would effectively ban the app from the United States.

It's unclear how advanced the talks between Microsoft and TikTok are, but any deal could help alter TikTok's ownership, said the person with knowledge of the talks, who spoke on the condition of anonymity. 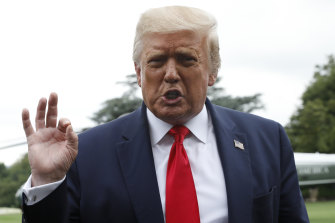 “We may be banning TikTok,” President Donald Trump said on Friday,Credit:Bloomberg

TikTok is owned by ByteDance, a Chinese internet company that is valued at $US100 billion ($140 billion). That has raised scrutiny of the app, with Trump administration officials saying they have been concerned that TikTok poses a threat to national security.

The Trump administration has been weighing whether to order ByteDance to divest from US assets it acquired in 2017, which were later merged into TikTok. Bloomberg reported on Friday that the President was poised to announce an order that would force ByteDance to sell TikTok's US operations.

The Trump administration has also been weighing other potential actions against the company, including adding ByteDance to a so-called "entity list," which prevents foreign companies from purchasing US products and services without a special licence, according to people familiar with the matter.

"We may be banning TikTok," Trump told reporters Friday, US time. "We may be doing some other things. There's a couple of options."

Representatives from TikTok did not respond to requests for comment. A spokesperson for Microsoft declined to comment.

Lawmakers and the Trump administration have increasingly questioned whether TikTok is susceptible to influence from the Chinese government, including potential requests to censor material shared on the platform or to share American user data with Chinese officials.

The app has been under review since late last year by the Committee on Foreign Investment in the United States, a federal panel that examines foreign acquisitions of US firms for national security threats.

TikTok has aimed to ease government concerns by tapping an American to head its US business. In May, TikTok hired a top Disney executive, Kevin Mayer, to be its chief executive.

Executives at TikTok have discussed other scenarios to alleviate regulator concerns, including one in which US investors like Sequoia Capital and General Atlantic could purchase TikTok back from ByteDance, with the Chinese company retaining a minority stake in the social app.