Those who think the risk of terror attacks is new have very short memories.

One straight out of the ISIS playbook is creating an incident to lure authorities to a spot where an ambush can be launched.

It has been used in London, Paris and throughout Europe but more than 30 years ago the tactic was used with ruthless efficiency in the small, quiet and leafy Walsh Street, South Yarra.

It was there, just before 5am on October 12, 1988, that police constables Steven Tynan and Damian Eyre were shot dead.

When police are killed it is usually by an offender desperate to escape arrest. This was entirely different. A stolen car was left in the middle of the street to lure police to the ambush.

It was cold-blooded and loosely planned for months, although the final decision to act was made just hours earlier.

The red-hot suspects were a group of armed robbers who banded together through a common love of stolen money and an equal hatred of the police who pursued them.

It was a time when banks were robbed at a rate of around two a week and there were at least three teams of professional bandits picking off targets.

Most of the team came from crime families. Peter David McEvoy was different.

Far from growing up in the hard streets, he had lived in a peaceful cottage in the Botanic Gardens as his father, Stan, was chauffeur for governors Sir Dallas Brooks and Sir Rohan Delacombe. 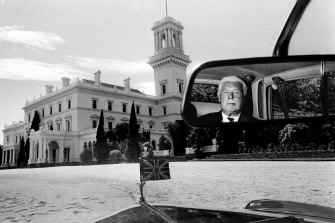 Sir Rohan Delacombe being driven to the front of Government House in Melbourne on his last day in office in 1974.Credit:Bruce Postle

He says they were regularly dropped at their private school in the governor’s Austin Princess limousine.

Geoff says they played together because they weren’t allowed friends inside the governor’s grounds. Peter loved to play Cowboys and Indians in the gardens. That is, until he turned rotten.

His decent, loving family tried to support him and then turned away, totally ashamed. Geoff became a policeman and then a prison officer when Peter was an inmate: “He spent more time in Pentridge than I did.”

After police shot dead robbers Mark Militano (March 1987) and Frankie Valastro (June 1987), detectives were told the Flemington Crew had developed a so-called “two for one” pact. If police killed another of their associates, they would kill two cops.

The intelligence was the gang would target members of the armed robbery squad, following them from the crime department to their private homes. No one thought it would be a random attack.

On October 11, three carloads of armed robbery detectives planned to arrest Jensen, the prime suspect in the murder of security guard Dominik Hefti, who was shot dead during an armed robbery at Barkly Square, Brunswick.

They considered storming Jensen's house in Narre Warren but rejected the idea because he was known to be armed.

Instead they waited for him to leave, planning to surround him when he stopped. But there was a glitch. When he pulled up at the local shopping strip to buy a spark plug, the last unmarked police car that was to box him in arrived late and skidded through, leaving Jensen an escape route. He reversed out and was shot dead. A firearm was found in Jensen’s car and detectives at the scene said he was shot in self-defence. (Jensen was found not to be Hefti’s killer.)

That night Peirce and McEvoy spoke on the phone and decided to launch the ambush. Abdallah was told to steal a car that was dumped as bait in Walsh Street.

A police taskforce named Ty-Eyre after the two officers slain in Walsh Street was set up under the joint leadership of David Sprague and John Noonan.

It was hamstrung from the beginning by a lack of computer facilities, micro-management from above, police outside of the taskforce taking unauthorised action and internal divisions.

Eventually five men – Peirce, McEvoy, Farrell, Pettingill and teenager Jason Ryan – were charged. Ryan was indemnified to give evidence against the others. 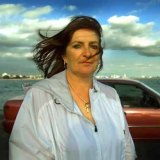 Walsh Street witness Wendy Peirce said the police murders were carried out as as payback.Credit:Craig Abraham

The star witness was Peirce’s wife Wendy, who made detailed statements to police and was placed in witness protection.

But at the 1991 trial she flipped, refusing to give evidence. Many, including Noonan, wanted her to be declared a hostile witness and forced to testify. Instead the jury did not hear from her. She was later jailed for perjury.

After a seven-week trail in 1991 the four men were acquitted.

Years later, Wendy confessed to me she believed they were guilty.

“It was spur of the moment; we were on the run. Victor was the organiser. It was more Jedd and Macca [McEvoy] than the others.

"Jedd was the trigger man; he had the shotgun. Macca took [Damian Eyre’s] handgun."

Both police were shot with a shotgun. Eyre, seriously wounded, was then shot with his own gun.

On acquittal McEvoy baited police at the court, yelling he wanted an inquiry: ‘‘What do you think about that? … 'I’ll fix you; I’ll fix you.' Is that what you said? I’ll be waiting. I’m not afraid to die.’’

His enthusiasm for an inquiry dissolved quickly. He did jail time for stick-ups and then moved to New South Wales, occasionally surfacing to say he was not involved in Walsh Street. 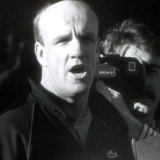 Behind the scenes he traded on the notoriety. A prison officer told me: “On the day police served McEvoy with a copy of the brief of evidence, which contained a box of the evidence photos of the two slain members, McEvoy began to hold court inside the unit and distribute the evidence booklets to the gathered inmates. When McEvoy was quizzed by his audience about the shootings he just smiled. It was a smile that exuded pure evil and at that point, I knew he was as guilty as sin.”

When he was arrested in NSW in February 2010 he taunted police, saying: “The sweetest thing I ever heard was the police officer's last words while he was dying.”

McEvoy also allegedly told the arresting police: “I can't wait to put a shotgun to your head. Loaded up with a solid [shot] and watching your f—ing head get blown up.”

Claims that this was just an unfortunate lapse sounded hollow when it was revealed he had broken a man’s collarbone with a baseball bat. Regardless, in 2012 the Coroners Court refused to reopen the inquest, saying those statements alone did not place McEvoy at the scene.

Geoff McEvoy is a year older than his brother. He says Peter was a normal kid who, when jailed for 14 days as a teenager for driving whilst disqualified, came home saying: “I will never go back there again.”

By the age of 20 he was part of a gang said to be responsible for the abduction, torture and sexual abuse of up to 24 girls mostly aged between 13 and 16.

He was found guilty of two counts of rape and acquitted of several.

While inside prison he started to associate with crooks, including Victor Peirce. “It broke dad’s heart,” says Geoff. 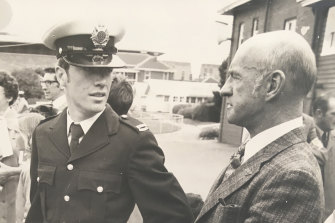 Geoff McEvoy graduating from the Police Depot with his father Stan.

While working in a maximum-security division at Pentridge he received a phone call from his brother. “He said ‘I hear you are giving a friend of mine a hard time.’ I told him it had nothing to do with him and he said ‘just remember I know where you live'.

“If he wants to say he was not involved in Walsh Street, perhaps he shouldn’t brag that he was.”

About 10 years ago the brothers exchanged angry texts. Geoff says Peter threatened: “You’ll be lying on the ground like the second Jack [policeman] we offed [killed] saying ‘No, No, don’t shoot’.” 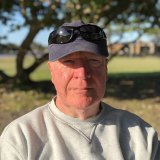 ‘I am certainly convinced they did it’: Geoff McEvoy today.

“If he is going to make those sort of comments to me then I am going to take them on board. I am certainly convinced they did it- 100 per cent.” He says he took screenshots of the threats and gave them to NSW Police but they were destroyed in a flood of a storage area.

Retired Inspector John Noonan has long thought there should be a new coronial inquest to establish the facts, though he believes the accused men ultimately suffered the consequences of their actions. Four of those alleged to have been involved are dead; Houghton and Abdallah were shot by police and Farrell died of natural causes.

“Victor Pierce died the way he should have – just a callous, callous criminal," Noonan says. "And he met his match at the hands of another drug dealer."

In 2002 Peirce was murdered in his car in Bay Street, Port Melbourne. It was a Holden Commodore, the same type of vehicle used to lure Tynan and Eyre to Walsh Street.

“Jedd Houghton – I suppose you could say he was sentenced by his own hand," Noonan adds.

"Peter McEvoy is a coward. He cringes at his own shadow now and fears what's going to come around the corner every second of the day, which is probably not a bad thing.”