The first samples brought back from Mars could be quarantined on the Moon to avoid contaminating Earth with alien life, experts have suggested.

Engineers at Airbus are designing a rover to collect rocks and soil that will be left by NASA's Mars 2020 mission, which is due to launch next year. 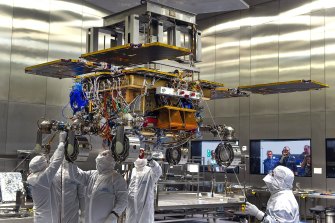 Airbus’ rover is being prepared for its departure in 2020.Credit:Max Alexander / Airbus

The small tubes of Mars dust will be loaded on to a rocket and fired into orbit where they will be scooped up by another spacecraft and eventually set down in the Utah desert.

Scientists are concerned that if something went wrong on re-entry, then Martian bacteria or viruses could be released into the atmosphere, so are considering parking the precious cargo on the Moon. It could then be assessed before being brought down to Earth.

Last week robotics teams carried out vision tests at the Mars Yard at Airbus in England, to make sure the rover will be able to spot the sample tubes even if they roll into a crack or become covered in dust.

"This is the most complicated mission we've ever had to do, because you've got multiple launches, multiple spacecrafts, it's inter-agency, you've got two rovers. And all the while there is this added concern of planetary protection," said Adam Camilletti, of the Mars Sample Return Programme.

"When we take something to Mars we mustn't corrupt the Martian ecosystem, there are very strict rules. But when you've got a return to Earth you've got the added concern that you don't want to bring back any possible Martian life back, in a sort of War of the Worlds style.

"There mustn't be a direct path by which Martian material could enter the terrestrial ecosystem. There is some speculation about returning it to the Moon, whether that would be better. If you can pick it up away from the Earth, it gets rid of your concerns about contamination as you've got a 400,000km barrier, so there is some sense to doing that."

Landing on the Moon would also navigate the problem of keeping the samples cool. Although Martian meteorites have landed on Earth before, they heat up so much on entering Earth's atmosphere that it wipes out most of the useful information. The Moon would be far cooler so it would be easier to keep samples at no more than 30°C and they could be brought back on spacecraft already temperature controlled for humans.

The rover will be hunting at the site of an ancient lake which experts believe holds the best chance of finding evidence of fossil life. It will be the first time that material from the Red Planet has been brought back to Earth and it could prove for the first time that life once existed on another planet.

The second rover, provided by the European Space Agency (ESA) will not launch until 2026, meaning the sample tubes will have lain on the planet's surface for five or six years.

Scientists are concerned that dust storms could cover the 36 tubes, or even blow them into crevices of cracks on the ground.