Featuring the biggest OLED panel currently available, in the highest resolution available, LG's new 88-inch (2.2-metre) 8K TV is arguably the most advanced television on the market. OLED provides the best picture quality by far, of current technology, and seeing 8K images on this display is simply jaw dropping.

But the LG Z9 doesn’t come cheap. The television ships for an equally jaw dropping price of $59,999; but that includes shipping so I guess it’s a bargain, really. 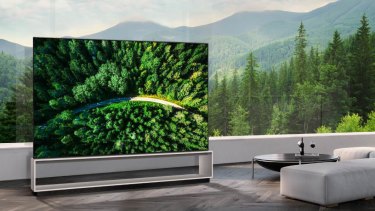 The LG Z9 is a massive TV with a built in stand, speakers and sub woofer.

The price of this television is quite frankly obscene. Anyone who can devote a living wage to buying a television is clearly earning too much money, but discussions of income inequality are better suited to other sections of the site.

Of course, there is almost no content available in 8K resolution — free to air channels barely make it to 1080p — but the LG Z9 beautifully upscales current images to fill the screen. And once panels become this large, 8K is almost a necessity; you would see the individual pixels of a 4K display at standard view distance.

The high resolution also future proofs this television for the next generation of gaming consoles and streaming content.

Image quality is incredible, as you would hope. LG OLED panels have long been the industry benchmark, providing the blackest blacks, the best contrast, and industry leading Dolby HDR.

UHD content looked stunning on this panel. I could see no artefacts from upscaling; everything from the bright technicolour of Aquaman to the subtle hues of Netflix’s Manhunter looked exceptional.

There was no image banding across colours, and no image tearing during the awful, chaotic set pieces of modern comic book movies, where a thousand nameless heroes and villains battle indefinitely.

The panel sits atop a beautiful stand that is also a speaker; the unit hides two downward facing speakers and a subwoofer.

Of course, if you’re spending sixty grand on a television I assume you’ll have money left over for a decent surround sound system. And if that’s the case, the speaker can become the centre channel.

I doubt LG will sell more than a handful of these units in Australia. The Z9 is more a preview of the next generation of televisions than a product designed for the mainstream.

But for those who can afford it and have no shame, this is currently the best big panel for your home theatre.