A new era of space exploration is upon us, but it still sounds slightly bonkers to attest to one's belief in aliens. Hollywood stories about "little green men" and conspiracies about animal mutilations and what really happened at Area 51 have created something of a PR problem for life beyond Earth.

While scientists discuss this question with fervour, mainstream debate is thin on the ground. 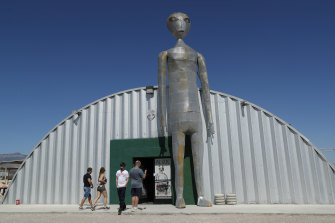 Witness the bafflement that greeted Dr Helen Sharman, Britain's first astronaut, earlier this month when she proclaimed the existence of extraterrestrials.

This cultural stigma is deeply unfair. Dr Sharman's belief that aliens, invisible to the human eye, could already be living on Earth may sound outlandish, but it is hard to dispute her wider point that "there are so many billions of stars out there in the universe that there must be all sorts of forms of life".

The mathematical probability of life forms existing beyond our planet is overwhelming. This isn't just idle musing: scientists have worked to quantify the odds. The Drake equation – devised in the 1960s as a way of estimating the number of technological civilisations in the universe based on factors thought to determine the development of such societies – strongly suggests that we are far from alone.

The pursuit of a definitive answer to what's out there has attracted big money from investors such as the Russian billionaire Yuri Milner and the late Paul Allen. Even just finding simple microbes on Mars would carry enormous implications.

If we prove that life has independently developed on another planet in our solar system, then it immediately begs the question of what other life forms exist on the countless other planets orbiting countless other suns across the universe.

For now, Earth is the only place where we know for certain life exists, but there are many other candidates.

In the case of Mars, evidence suggests the Red Planet in the past was warmer and wetter, much better conditions for life.

Another of the most interesting contenders is Europa, one of Jupiter's moons. With a smooth frozen surface beneath which there is believed to be a liquid ocean, it could have all the essential ingredients needed.

Orbiting the planet Saturn are two more moons which may harbour life – Enceladus (another world with a frozen surface and a probable liquid ocean) and Titan (the only moon in our solar system with an atmosphere, which can be best thought of as similar to a young Earth).

Even the planet Venus – once deemed completely inhospitable – may harbour simple life forms adrift in its clouds. One of the things we have learnt from studying the most hostile environments here on Earth is that life can exist under far more extreme conditions than we once might have thought.

With further robotic missions heading to Mars this year, and the launch of the James Webb Space Telescope and Europa Clipper later this decade, we are getting ever closer.

Scoff, if you like, at those of us who believe in aliens. But within the next few decades, we'll know if we are really alone.