Tim Cook took the stand in a trial for the first time as Apple’s chief executive on Friday and defended his business from accusations that it hurt app makers to expand its profits, a major moment in Apple’s efforts to fend off growing scrutiny of its power.

Mr. Cook spent the first part of Friday morning answering friendly questions from an Apple lawyer in its trial against Epic Games, creator of the popular game Fortnite. Epic is suing Apple for, in Epic’s view, creating and maintaining a monopoly with its App Store.

For just over an hour, the Apple lawyer led Mr. Cook through a number of different areas of scrutiny that Apple had faced, enabling him to present Apple’s explanation on why it did business a certain way — and why it wasn’t harming developers. He testified that Apple faced lots of competition, that it invested considerably in the App Store to protect users, and that it had lowered its app-store fees for many developers.

He said that Apple’s strict rules for apps were intended to create a safe environment for iPhone users and that the commissions it collected on some developers helped fund Apple’s investment in the App Store. “There’s a conflict between what the developer may want and what the consumer may want,” he said.

Mr. Cook’s testimony was set to cap the three-week federal trial in downtown Oakland, Calif. The trial homed in on Apple’s tight control of the App Store and the 30 percent commission it takes on sales of most digital goods and subscriptions. The trial’s outcome, to be decided by Judge Yvonne Gonzalez Rogers of the U.S. District Court for the Northern District of California, could maintain Apple’s dominance of the $100 billion app market or upend it.

An Epic victory would also invigorate the antitrust fight against Apple. Federal and state regulators are scrutinizing Apple’s control over the App Store, and the European Union recently charged Apple with violating antitrust laws over its app rules and fees. Apple faces two other federal lawsuits about its App Store fees — one from developers and one from iPhone owners — that are seeking class-action status.

The trial — while drifting into discussions of Epic’s vision for a “metaverse” and whether a banana is sometimes just a banana — has also been a reminder of the challenges faced by smaller companies trying to prove that industry giants are leveraging their power in an unfair way.

Epic’s lawyers argued that Apple had created a “walled garden” within its App Store while stifling innovation with strict rules, harming app developers by charging excessive fees, and making life difficult for users with its financial policies. The company also wants to be given the ability to have its own digital storefront within Apple’s.

Apple’s lawyers argued that Apple has been a good partner to app makers and has maintained its app policies in the name of safety and privacy. 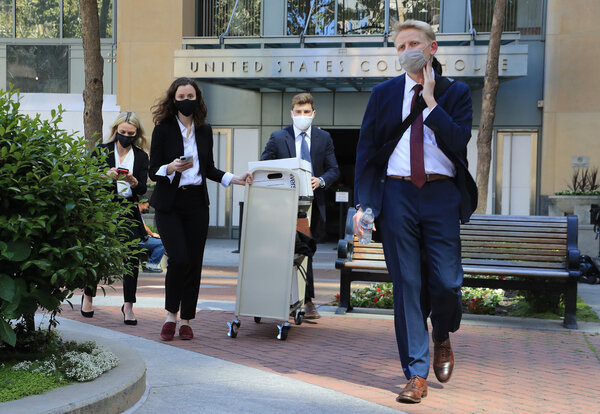 Many details of Apple’s internal communications have spilled out — including Steve Jobs’s fears that Apple would lose the cloud storage market to Google — but the company has steadfastly refused to say how much it profits from the App Store.

It is unusual for prominent executives to testify in a trial that challenges their business, and Mr. Cook, who leads the world’s most valuable company, has never testified in court as the chief executive of Apple.

Mr. Cook’s testimony attracted attention to what is expected to be the penultimate day of the trial. The judge allowed a larger number of people from Apple and Epic in the courtroom, and news cameras and reporters lined up outside the federal court in Oakland waiting for Mr. Cook’s arrival.

Mr. Cook entered the courthouse from an underground garage rather than its main entrance, which allowed him to avoid the line of photographers. About 7:30 a.m., journalists spotted him going through security checks inside and shouted questions. Mr. Cook, wearing a dark gray suit, white shirt and gray tie, held up his hand in a peace sign.

One longer portion of his testimony focused on the profitability of the App Store. An expert witness for Epic had estimated that Apple’s profit margin on the App Store was roughly 80 percent. On Friday, Mr. Cook said that was wrong. He said that the App Store was profitable, but that Apple hadn’t tried to determine precisely how profitable, in part because it would be difficult based on how Apple structured its costs.

Later, an Epic lawyer homed in on that claim at the beginning of his questioning of Mr. Cook. The lawyer showed Mr. Cook internal Apple documents that suggested the company could calculate the App Store’s profitability. The lawyer appeared to be trying to show that Mr. Cook wasn’t being entirely truthful in his testimony. Mr. Cook repeatedly pushed back, saying that the documents showed incomplete figures.

At another point, the Apple lawyer questioned Mr. Cook on Apple’s competition in the app market. Mr. Cook said he believed digital marketplaces that distributed games, including Epic’s and those of the gaming-console makers like Sony and Microsoft, were direct competitors to the App Store. Though, he admitted, “I’m not a gamer.”

Throughout the trial, Judge Gonzalez Rogers frequently sought clarification on technical jargon and pressed witnesses further on their answers. She asked about the difference in business models for Fortnite, Epic’s most popular game, and games like Roblox and Minecraft from other companies, and asked how Apple’s security compared with that of third-party companies.

The biggest challenge in deciding the case may be defining the market that Epic and Apple are fighting over. Apple argued that Epic has many options for game distribution including web browsers, gaming consoles and personal computers. Many of those platforms charge a commission similar to that of the App Store. If gaming is the market, Apple argued, then there are many competitors — like Microsoft, Sony and Nintendo — and Apple cannot have a monopoly.

Epic responded that Fortnite is more than a game. It is something the company calls the metaverse — an infinite digital universe with activities, social media and even concerts. The argument led to a lengthy and detailed debate over what a game actually is. The point? This case, Epic’s lawyers argued, is about all mobile apps, which can only reach the iPhone’s one billion users through Apple’s App Store.

Judge Gonzalez Rogers expressed frustration over the market semantics. “One side will say it’s black, the other says it’s white — typically it’s somewhere in the gray,” she said last week.

Apple argued that its fees were necessary to maintain security for its customers. The company’s lawyers said the App Store’s restrictions protected against malware and data breaches for iPhone users.

Apple rejected 40 percent of app submissions in 2020, Trystan Kosmynka, one of the heads of the App Store, testified. The company could not effectively police inappropriate or harmful content if Epic were to prevail in its demand to have its own app store within Apple’s, Mr. Kosmynka said.

Epic responded with a flurry of internal Apple emails showing times when harmful apps made it past Mr. Kosmynka’s team. One app, released during last summer’s Black Lives Matter protests, was a game that allowed users to shoot cannons at protesters.

Apple tried to show why allowing an app store within an app store could be problematic. Its lawyers criticized Epic’s digital storefront for not maintaining tight enough control, saying companies had managed to use it to sell games that they called “offensive and sexualized.”

In another attempt to tie Epic to unsuitable content, Richard Doren, a lawyer for Apple, brought up Peely, a cartoon banana in Fortnite who sometimes wears a tuxedo and sometimes goes nude. Mr. Doren implied that it would have been inappropriate to display Peely without a tuxedo in a federal court. Matthew Weissinger, Epic’s vice president of marketing, clarified that Peely, naked or suited, was not scandalous.

The fight between the companies began in August, when Epic violated Apple’s rules by circumventing Apple’s payments system in the Fortnite app. Apple removed Fortnite from the App Store, and Epic immediately sued the company and began a promotional campaign around the suit.

On the first day of the trial, Epic’s chief executive, Tim Sweeney, testified that his company had filed suit because he wanted to show the world the consequences of Apple’s policies. Judge Gonzalez Rogers interrupted to ask whether Mr. Sweeney had known about a different developer lawsuit against Apple.

Mr. Sweeney said he had.

“And you just ignored that and went on your own,” the judge responded.

The trial will wrap up Monday, but Judge Gonzalez Rogers said a ruling would not come that day or the next one. She noted that the verdict on a recent tech antitrust case was longer than 200 pages. “I have a very tiny team,” she said. She also said her decision would probably be appealed, meaning the trial could be just the first chapter of a longer fight.