LONDON — Google agreed to pay roughly $270 million in fines and change some of its business practices as part of a settlement announced on Monday with French antitrust regulators who had accused the company of abusing its dominance of the online advertising market.

The agreement was one of the first times an antitrust regulator had taken direct aim at Google’s online advertising infrastructure, a platform that scores of websites worldwide rely on to sell ads.

The fine is pittance compared to Google’s overall business — its parent entity, Alphabet, earned $41 billion last year — but the French authorities hailed the concessions they got from the company because they affect technology and practices at the heart of its business.

In the United States, Google faces similar antitrust scrutiny over its online advertising technology from a group of state attorneys general, as well as from Britain’s antitrust regulator.

“It is essential to apply our competition rules to the digital giants who operate in our country,” he said. The accusations of abuse of the advertising technology are “serious,” he added, “and they have been rightly punished.”

French competition regulators said Google used its position as the world’s largest internet advertising company to hurt news publishers and other sellers of internet ads. Authorities said that a service owned by the Silicon Valley giant and used by others to sell ads across the internet gave Google’s business an advantage, undercutting competition.

As part of the settlement, French authorities said Google agreed to end the practice of giving its services preferential treatment and to change its advertising system so that it would work more easily with other services. 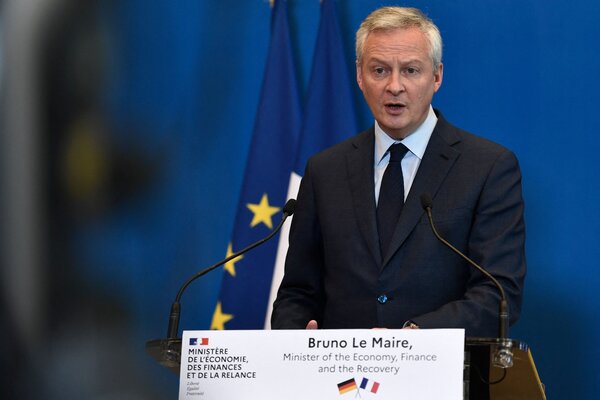 Google has built up its dominance in online advertising for more than a decade, controlling technology at nearly every step of a process that underpins key parts of the internet economy. Its services help publishers sell space on their websites, and its technology runs automated auctions that let brands bid to place ads in those slots.

Google’s position has long been a source of concern among competitors and news publishers, who say it gives the company unfair insights into advertising prices, inventory and data that others cannot match.

Among the companies that complained to French authorities about Google wwere News Corp., the publisher of The Wall Street Journal and a longtime critic of the company’s ad technology, and the French publisher Rossel La Voix Group, the competition authority said. The companies have argued that Google’s power is so far-reaching that it can squeeze a higher cut of each advertising sale without paying the costs of creating content. News organizations have argued this economic imbalance contributed to their declining business fortunes and shrinking newsrooms.

French authorities focused on the links between Google’s marketplace for auctioning ads, called AdX, and another service, called Ad Manager, which is used by publishers to sell space on websites for advertising. The French competition authority said Google shared pricing information collected from Ad Manager to give an advantage to its auction product.

“These very serious practices penalized competition in the emerging online advertising market, and have enabled Google not only to preserve but also to increase its dominant position,” said Isabelle de Silva, president of the French competition authority.

Google did not admit to wrongdoing in the settlement, but the case may show how the company might appease regulators elsewhere. Google agreed to make more data available to rivals and make it easier for them to use its online advertising services.

An independent monitor, paid by Google, will also be in charge of making sure the company abides by the terms of the settlement. The order is mandatory for three years in France, though Google said it might apply some of the policy changes elsewhere.

“While we believe we offer valuable services and compete on the merits, we are committed to working proactively with regulators everywhere to make improvements to our products,” Maria Gomri, legal director for Google France, wrote in a blog post.

The actions in France are part of the growing scrutiny in Europe, the United States and elsewhere of the power of the world’s largest technology companies.

Last week, the European Commission and Britain announced antitrust investigations of Facebook over its classifieds service called Marketplace. The commission has also brought antitrust charges against Apple, saying its App Store policies are anticompetitive, and Amazon for the unfair treatment of third-party merchants. The European Union is also considering stiffer antitrust laws and content moderation rules targeting the tech sector.

In the United States, federal regulators have brought antitrust charges against Google and Facebook in recent months. Regulators in Australia, China, Germany and elsewhere are also showing more willingness to step into the digital economy.