Google’s upcoming smartphones will use chips designed wholly in-house for the very first time this year, as the web giant seeks to accelerate AI-powered mobile operations and further differentiate its Pixels from the Android pack.

The company announced overnight that it will launch a Pixel 6 and Pixel 6 Pro smartphone later this year, powered by a brand new system-on-a-chip called Tensor. In a blog post, Google’s devices and services head Rick Osterloh said existing mobile chips were inhibiting its ambitions when it came to machine learning and artificial intelligence. 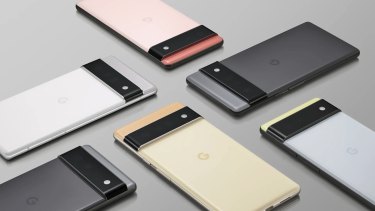 The Google Pixel 6 and 6 Pro will launch later this year.

“As more and more features are powered by AI and ML, it’s not simply about adding more computing resources, it’s about using that ML to unlock specific experiences for our Pixel users,” he said.

“Tensor enables us to make the Google phones we’ve always envisioned; phones that keep getting better, while tapping the most powerful parts of Google, all in a highly personalised experience.”

Google’s existing phones can process many AI tasks on the device without needing to send data over the internet, including photo improvement and live transcription of audio content. But the new chip may enable improvements in these areas beyond what other phones could accomplish, for example processing images taken from multiple lenses simultaneously for improved focus on moving targets, or live translated captions of any foreign language video content.

Google’s move to in-house chips separates it from the wider Android smartphone ecosystem, which consists almost entirely of phones using Qualcomm’s Snapdragon line of SoCs. The company also heavily customises the version of Android on its Pixel smartphones, optimising for AI tasks and promising instant updates to new versions that can take months for Samsung to implement.

Little is known about the Pixel 6 pair outside of its licorice all-sort design, which features a thick black bar to house the cameras. But according to hands-on impressions from The Verge, the new phones are Google’s first attempt in five years to make a high-end phone that competes directly with Apple and Samsung’s premium models. The Pixel 6 Pro will reportedly feature an in-display fingerprint reader, 6.7-inch 120Hz screen and a triple camera array with a 4x optical zoom lens. Osterloh said Google is aiming for market leading performance.

Google typically unveils its phones in full around October, following Samsung and Apple which plan evens for August and September respectively. This year Samsung is expected to reveal a pair of new folding phones alongside its Galaxy S22, and Apple is rumoured to be shrinking the “notch” on its iPhone 13 and also stepping up to a 120Hz display.