OAKLAND, Calif. — When Sundar Pichai succeeded Larry Page as the head of Google’s parent company in December, he was handed a bag of problems: Shareholders had sued the company, Alphabet, over big financial packages handed to executives accused of misconduct. An admired office culture was fraying. Most of all, antitrust regulators were circling.

On Tuesday, the Justice Department accused Google of being “a monopoly gatekeeper of the internet,” one that uses anticompetitive tactics to protect and strengthen its dominant hold over web search and search advertising.

Google, which has generated vast profits through a recession, a pandemic and earlier investigations by government regulators on five continents, now faces the first truly existential crisis in its 22-year history.

The company’s founders, Mr. Page and Sergey Brin, have left the defense to the soft-spoken Mr. Pichai, who has worked his way up the ranks over 16 years with a reputation for being a conscientious caretaker rather than an impassioned entrepreneur.

Mr. Pichai, a former product manager, may seem an unlikely candidate to lead his company’s fight with the federal government. But if the tech industry’s bumptious history with antitrust enforcement is any lesson, a caretaker who has reluctantly stepped into the spotlight might be preferable to a charismatic leader born to it.

Mr. Pichai, 48, is expected to make the case — as he has for some time — that the company is not a monopoly even though it has a 92 percent global market share of internet searches. Google is good for the country, so goes the corporate message, and has been a humble economic engine — not a predatory job killer.

“He has to come off as an individual who is trying to do the right thing not only for his company but broader society,” said Paul Vaaler, a business and law professor at the University of Minnesota. “If he comes off as evasive, petulant and a smart aleck, this is going to be a killer in front of the court and the court of public opinion.”

Google declined to make Mr. Pichai available for an interview. In an email to employees on Tuesday, he urged Google employees to stay focused on their work so that users will continue to use its products not because they have to but because they want to.

“Scrutiny is nothing new for Google, and we look forward to presenting our case,” Mr. Pichai wrote. “I’ve had Googlers ask me how they can help, and my answer is simple: Keep doing what you’re doing.”

Few executives have faced a challenge like this, and the most iconic figures in the technology industry have wilted under the glare of antitrust scrutiny. 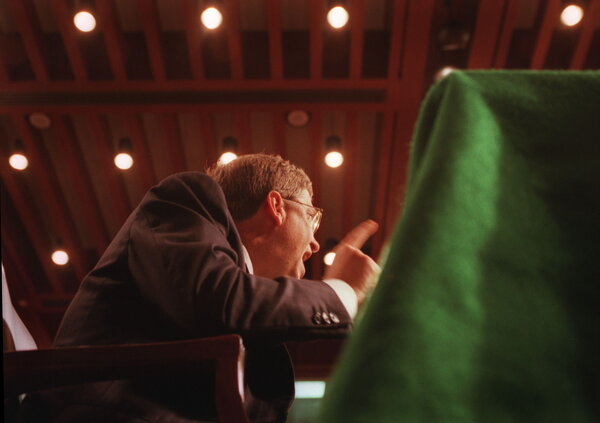 Bill Gates, who was chief executive of Microsoft in the last big technology antitrust case brought by the Justice Department two decades ago, came across as combative and evasive in depositions, reinforcing the view that the company was a win-at-all-costs bully. Mr. Gates said last year that the lawsuit had been such a “distraction” that he “screwed up” the transition to mobile phone software and ceded the market to Google.

Mr. Page dealt with impending antitrust scrutiny with detachment, spending his time on futuristic technology projects instead of huddling with lawyers. Even as the European Union handed down three fines against Google for anticompetitive practices, Mr. Page barely addressed the matter publicly.

On a conference call with reporters on Tuesday, officials at the Justice Department declined to reveal whether they had spoken to Mr. Page during its investigation.

In its complaint, the Justice Department, along with 11 states, said Google had foreclosed competition in the search market by striking deals with handset manufacturers, including Apple, and mobile carriers to block rivals from competing effectively.

“For the sake of American consumers, advertisers and all companies now reliant on the internet economy, the time has come to stop Google’s anticompetitive conduct and restore competition,” the complaint said.

Google said that the case was “deeply flawed” and that the Justice Department was relying on “dubious antitrust arguments.”

Google is also the target of an antitrust inquiry by state attorneys general looking into its advertising technology and web search. And Europe continues to investigate the company over its data collection even after the three fines since 2017, totaling nearly $10 billion.

At Mr. Pichai’s side are senior executives who are also inclined to strike an accommodating tone. He has surrounded himself with other serious, buttoned-up career Google managers who bring a lot of boring to the table.

The point person for handling the case is Kent Walker, Google’s chief legal officer and head of global affairs. Though Mr. Walker, who worked at the Justice Department as an assistant U.S. attorney and joined Google in 2006, oversees many of the company’s messiest issues, he rarely makes headlines — a testament, current and former colleagues said, to his lawyerly pragmatism.

Google has appointed Halimah DeLaine Prado as its new general counsel. A 14-year veteran of the company’s legal department, Ms. Prado was most recently a vice president overseeing the global team that advised Google on products including advertising, cloud computing, search, YouTube and hardware. While Ms. Prado doesn’t have a background in antitrust, she has been at Google since 2006 and is, by now, well versed in competition law.

The company is expected to rely heavily on its high-priced law firms to help manage the battle, including Wilson Sonsini Goodrich & Rosati, a top Silicon Valley firm, and Williams & Connolly, which has defended Google in other competition law cases.

Wilson Sonsini has represented Google from the company’s inception and helped it defend itself in a Federal Trade Commission investigation into its search business. In 2013, the agency chose not to bring charges.

Regardless of the legal argument for prosecuting Google as a monopoly, the case may shape the public perception of the company long after it has been resolved.

Until now, Google’s public posture has been a shrug. Mr. Pichai has said that the antitrust scrutiny is nothing new and that, if anything, the company welcomes the look into its business practices. Google has argued that it competes in rapidly changing markets, and that its dominance can evaporate quickly with the emergence of new rivals.

“Google operates in highly competitive and dynamic global markets, in which prices are free or falling and products are constantly improving,” Mr. Pichai said in his opening remarks to a House antitrust panel in July. “Google’s continued success is not guaranteed.”

Mr. Pichai is familiar with the machinations of antitrust proceedings. In 2009, when he was a vice president of product management, he lobbied the European competition authorities to take action on Microsoft’s Internet Explorer web browser.

“We are confident that more competition in this space will mean greater innovation on the web and a better user experience for people everywhere,” Mr. Pichai wrote in a blog post at the time, sentiments that search rivals say about Google today.

But shortly after he became Google’s chief executive in 2015, Mr. Pichai displayed his tendency for pragmatism when he buried the hatchet with Microsoft. The two companies agreed to stop complaining to regulators about each other.

Early in his tenure running Google, Mr. Pichai was reluctant to press its case in Washington — a job that one of his predecessors, Eric Schmidt, had reveled in. Mr. Schmidt, a big donor in Democratic politics, was a frequent visitor to the White House during the Obama presidency and served on the President’s Council of Advisors on Science and Technology.

In 2018, Google declined to send Mr. Pichai to testify at a Senate Intelligence Committee hearing on Russian interference in the 2016 presidential election. Annoyed senators left an empty seat for the company’s representative next to executives from Facebook and Twitter. (Mr. Page was also invited to testify, but there was never any expectation from people within the company that he would.)

Since then, Mr. Pichai has made frequent trips to Washington, testified at other congressional hearings and held meetings with President Trump.

Microsoft’s long battle with the government has also influenced how Google plans to wage its antitrust fight. Many Google executives believe Microsoft was too combative with the Justice Department, bringing the company to a standstill.

For most of the last decade, even as Google has dealt with antitrust investigations in the United States and Europe, the company has continued expanding into new businesses and acquire companies, such as the fitness tracker maker Fitbit last year.

Now the bill for that growth may have come due. And like it or not, it has been left to Mr. Pichai. Mr. Page, who is a year younger than Mr. Pichai and who Forbes says is worth $65 billion, is pursuing other interests.

Mr. Pichai “hasn’t had to deal with anything of this magnitude,” said Michael Cusumano, a professor and deputy dean at the Massachusetts Institute of Technology’s Sloan School of Management. “He has to face the government. He has no choice.”