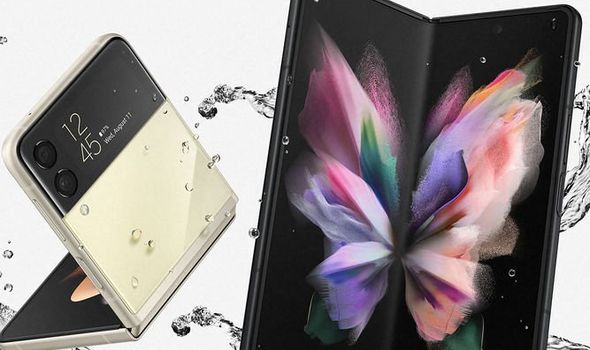 Samsung is back with some new bendy smartphones and they finally fix one of the biggest issues with this foldable technology. The all-new and totally refreshed Galaxy Fold 3 and Galaxy Flip 3 are both now made from much tougher Armor Aluminium which means they should survive life in your pocket. Samsung is even boasting that it’s been able to make its twisty handsets fully IPX8 water-resistant so there should be no problems surfing the web during a British downpour. This is an important upgrade from Samsung as the original Fold was criticised for being far too fragile with the firm actually delaying the release due to a number of reviewers breaking their devices ahead of the 2019 launch.

Along with being stronger, these devices are also lighter than before and the new Gorilla Glass Victus that covers the phone will stop the giant screens from getting scratched.

Both phones also now include a new protective film with the firm saying that its screens are now 80 percent more durable than before.

If you opt for the Galaxy Fold 3 you’ll be treated to a glorious 6.2-inch screen on the front. And thanks to its Infinity Flex tech this can be expanded to a whopping 7.6-inches once the device is opened. Both of these AMOLED screens now feature a 120Hz refresh rate which will make scrolling through websites appear silky smooth and stutter-free.

Samsung has also now included some clever tech that hides the selfie camera behind the display making it appear invisible. It’s clever stuff that will allow users to binge on boxsets without the usual hole-punched camera spoiling the look of things.

Other extras on this Fold 3 flagship include the latest Snapdragon 888 processor from Qualcomm, 5G network speeds and the ability to scribble on the screen with a dedicated S Pen Fold Edition and S Pen Pro. Both support air commands and have specially engineered retractable Pro tips with force limit technology to protect the Fold’s screen for peace of mind.

They also get an even lower latency which should help to make the experience of writing on the display more fluid.

Finally, for all photography fans, there’s a triple rear camera on the case which offers the usual wide, ultra-wide and telephoto options.

Samsung is making sure the giant screen put to good use when snapping shots with the Fold getting a Dual Preview. This will show on both screens so that you and your subjects can preview the shot before the shutter snaps.

On the photographer side, users can take advantage of the vast unfolded display with the ability to preview shots on the left side while capturing on the right side in Capture & View.

Sound exciting? The Fold 3 will be available in Phantom Black, Green and Silver and will cost £1,599.

If the Fold seems like too much to handle then the cute Flip 3 could be worth considering. This device features a bigger 1.9-inch cover screen on the case so you see notifications and snap selfies without opening up the clamshell body.

Samsung is making this miniature display more useful thanks to new Cover Screen widgets which show things such as schedules, weather, and daily step count.

Once flipped open you’ll get a 6.7-inch screen which also features a silky smooth 120Hz refresh rate for faster scrolling. As we mentioned earlier, the Flip 3 is covered in the new Gorilla Glass and is fully IPX8 waterproof.

There’s a dual camera, access to 5G data speeds, that fast 888 processor and it should last all day thanks to a standard 3,300mAh battery.

The Galaxy Flip 3 costs £949 and will be available in a bunch of colours (Cream, Green, Lavender and Black) with three exclusive tones if you buy direct from Samsung (Gray, White and Pink).

“We are proud pioneers of the foldable smartphone category and continue building on our legacy of innovation to shape the future of this industry,” said Conor Pierce, Corporate Vice President UK & Ireland, Samsung Electronics. “With the launch of the Samsung Galaxy Z Fold3 and Flip3, we are evolving our Galaxy Z Series portfolio with two devices built for the varying demands of today’s fast-paced world. For the first time, our much-loved S Pen is coming to the Galaxy Z Series with the Galaxy Z Fold3, while the Galaxy Z Flip3 is equipped with more power than ever before.”