The family of a motorcycle courier for a food delivery app who died after he was hit by a bus in Sydney will receive more than $830,000 in compensation after the state workers’ insurer agreed he was an employee rather than a contractor.

The landmark decision opens the door for a wave of workers’ compensation claims in the gig economy and gives fresh impetus to a push by unions to give tens of thousands of insecure workers more protections in their jobs. 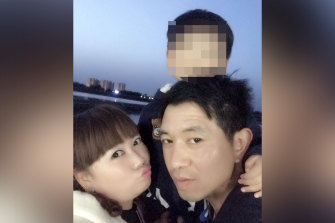 Xiaojun Chen (right) with his family, who have received a payout from his employer’s insurer.

The death of HungryPanda worker Xiaojun Chen, along with four other delivery couriers in a three month span in 2020, sparked a promise from federal Labor to legislate more protections for gig workers, who are typically work flexibly and are not on salaried contracts but paid per task.

Workplace Relations Minister Tony Burke said on Wednesday that without a federal scheme, gig workers faced the prospect of having to pursue individual cases through the courts with different outcomes in different states. “No matter which way you look at it, the days of gig workers having no entitlements cannot go on,” Burke said.

Unlike traditional employees, the couriers used by firms such as Deliveroo, DoorDash, Uber and the Chinese food-focused HungryPanda do not have rights to an industry minimum wage, workers’ compensation or unfair dismissal protection.

Chen’s widow, Lihong Wei, their two children and his father all relied on his income back home in China. They will receive a combined $827,400 plus interest. In a statement issued through law firm Slater and Gordon and the Transport Workers Union, which have assisted the family, Wei spoke of her devastation.

“My children miss their daddy every day,” she said. “My daughter has begun struggling with school and my son has lost his father forever at just eight years old. My father-in-law has lost his only son.
Nothing can ever fix this.” 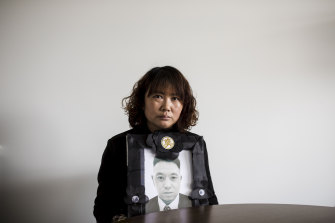 Lihong Wei holds a portrait of her husband, Xiaojun Chen, who was killed while working for a delivery company in Sydney.Credit:Dominic Lorrimer

NSW Personal Injury Commission documents show insurer EML, which is an agent of the NSW workers’ compensation scheme iCare, agreed that Chen was employed by HungryPanda at the time of his death.

Slater and Gordon lawyer Jasmina Mackovic said the decision did not mean that all gig economy workers were entitled to compensation for deaths or injuries because of differences between companies and workers’ practices, but that the decision potentially opened the door to other payouts.

“It’s massive,” she said. “Until less than a month ago, it was unheard of … but this is showing we’re moving in the right direction, showing they are workers and they deserve all the minimum basic rights that you get in Australia.”

Many firms such as Uber and Deliveroo offer personal injury insurance to their couriers, but it sometimes has different payout caps and eligibility rules to traditional compensation schemes.

Australia’s courts, regulators and tribunals have ruled repeatedly on whether gig economy workers are employees, with most concluding they are contractors.

HungryPanda spokeswoman Kitty Lu said the company was aware of the decision, noted the insurer was making the payout and pointed to safety measures implemented since Chen’s death.

“Our thoughts are with the Wei family at this difficult time,” Lu said. “Drivers’ safety is our number one priority as an organisation and HungryPanda shall keep working hard to keep our drivers safe.”

Mackovic said EML was now likely to seek extra premiums from HungryPanda if it took the view that the rest of its workforce were employees, which Lu did not address. EML declined to comment, saying it does not discuss individual cases.

Transport union boss Michael Kaine paid tribute to Wei’s doggedness, hit out at the industry and called for the government to urgently legislate its promise to let the industrial tribunal assign employee-like rights to gig workers.

“For too long, gig companies have been able to skirt the edges of our outdated industrial relations law which divides workers into two camps: one which receives hard-won rights, and one which is not entitled to any basic protections,” Kaine said.

The NSW government has considered adding a levy to food deliveries to pay for insurance, but that has not been legislated.