Note: This week through Thursday afternoon

Contracting Covid-19 may have put President Trump in the hospital, jeopardized his re-election campaign, and drawn attention to his administration’s failures to contain the deadly pathogen. But it’s been great for his Facebook page.

For the week that ended Saturday, the president received 27 million reactions, shares and comments on his Facebook posts, according to data from CrowdTangle, a Facebook-owned analytics platform.

That number broke the president’s previous weekly record of 25 million interactions, which came in November 2016, the week he was elected. (Mr. Trump’s highest single-day total was on Election Day that year, when he received 12.3 million interactions.)

The president’s most-engaged post came on Saturday, the day after he was flown to Walter Reed National Military Medical Center. It was Mr. Trump’s first appearance on social media after his hospitalization, and he claimed his treatment was “going well, I think!” The post received more than three million interactions.

A post by Mr. Trump two days later, in which he told his followers, “don’t be afraid of Covid,” got more than 1.5 million interactions. The post was widely criticized by medical experts for downplaying the risks of the virus, and critics called for it to be taken down from Facebook and Twitter. But neither company took it down, saying it did not pose an immediate threat of physical harm.

Facebook did take down another of the president’s posts, in which he falsely claimed that Covid-19 was less lethal than the flu. Twitter left the same post up, but covered it with a warning that it violated the company’s rules on Covid-19 misinformation.

Mr. Trump responded to that takedown by calling for the repeal of Section 230 of the Communications Decency Act, a law that shields internet platforms from some lawsuits. The president has repeatedly claimed that Facebook and other social networks are biased against conservatives, despite evidence that right-wing content is some of the highest-performing material on the platforms. 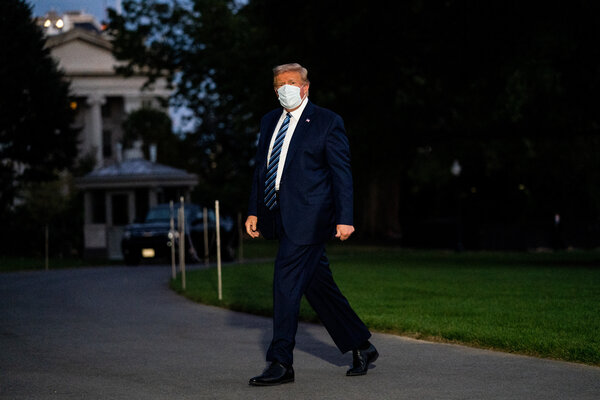 Engagement data doesn’t capture how widely posts are seen in users’ feeds, or whether the reactions to them are positive or negative. But most of the responses to Mr. Trump’s posts appeared to be from well-wishers and people hoping for a speedy recovery. Of the 2.5 million interactions on his Saturday post saying his treatment was “going well,” nearly all were accompanied by the “like,” “heart” or “hug” emoji. (Only 1,200 people reacted with the frowny-face emoji.)

Mr. Trump has been one of Facebook’s most popular accounts for years. But in the months leading up to the election, the engagement on his page has been growing, allowing him to circumvent the mainstream media and turning him into a major broadcaster in his own right. Last month, the president received 87 million Facebook interactions — more than CNN, ABC News, NBC News, The New York Times, The Washington Post and BuzzFeed combined.

Joe Biden, Mr. Trump’s Democratic challenger, also had one of his best-ever weeks of Facebook engagement, with 4.7 million interactions — less than one-fifth of Mr. Trump’s total.