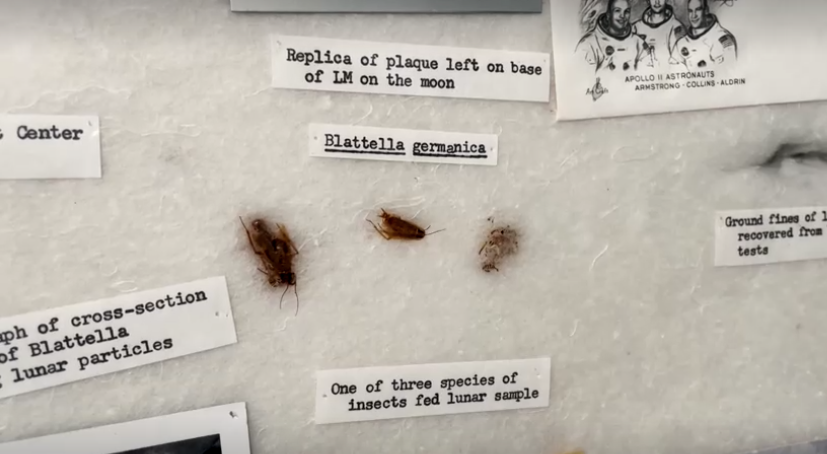 Cockroach carcasses and the Apollo 11 moon dust extracted from their stomachs are now up for auction.

The moon dust was supposedly brought back to Earth in 1969 by the Apollo 11 astronauts. The unusual items on sale are a result of a Nasa biological exam in search of unsafe ‘moon bugs’.

The unique items are set to be auctioned in Boston as part of a collection featuring items from kings, presidents and the moon.

The auction is being handled by RR Auction, an American firm that specialises in space memorabilia. The cockroach-consumed moon dust is amongst the highlights of the ‘Remarkable Rarities’ auction, which opened for bids on May 26 and runs through June 23.

‘The item that I’m most excited about is this Apollo 11 scientific experiment where they fed cockroaches lunar material from Apollo 11,’ said Bobby Livingston, executive vice president of RR Auction.

‘This is the material, the lunar material that was digested by the cockroaches during destructive testing. This moon dust was eaten by cockroaches. And this is the remnants of it,’ he added.

Autographed items from Babe Ruth and King Henry VIII are also part of the collection. Other highlights in the 50-item auction include a 1943 German Enigma machine that’s estimated at $275,000 and an Elon Musk signed dollar bill listed at $5,000.

Where did the cockroaches come from?

In the leadup to the first mission of humans on the moon, scientists were not entirely sure that the astronauts would bring back germs or ‘moon bugs’ that could harm life on Earth.

So the Apollo 11 crew and everything that returned with them were quarantined for 21 days after their return to Earth.

Inside the Lunar Receiving Laboratory, a special facility that Nasa built to isolate the moon men and material from the outside world, the astronauts underwent medical exams while several invertebrate creatures — from fish to mice and cockroaches — were exposed to moon rocks and dust to see how they would react.

Roughly 22 kilograms of moon rocks brought back by the Apollo 11 mission were allocated for these tests.

While none of the animals or astronauts showed any signs of adverse exposure to the moon rocks, the space agency hired Marion Brooks, an entomologist from the University of St. Paul, to study the moon dust exposed cockroaches.

Brooks worked with the group of cockroaches that were fed a ‘half-and-half’ diet of raw lunar dust and regular food and found no signs the lunar soil was toxic or hazardous to them.