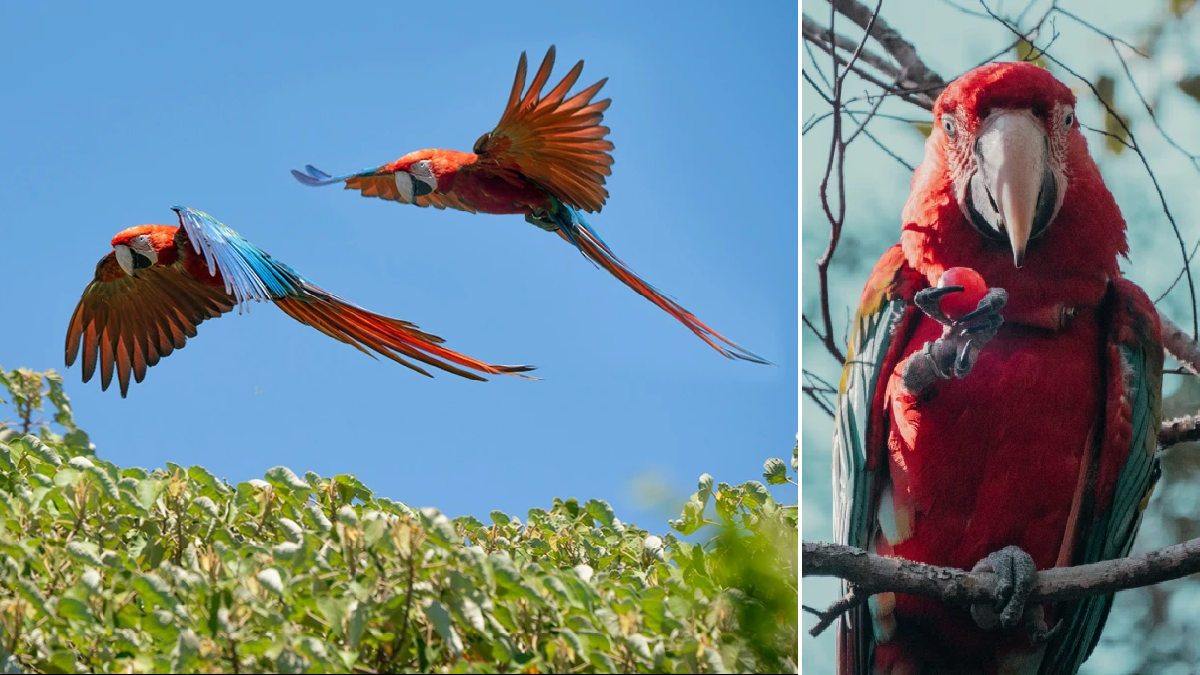 Rewilding. We’ve all heard about it, but in reality, how is it done? Plants? Easy – plant them. But animals? How do you prepare captive animals for a life in the wild?

In the case of red-and-green macaws, with obstacle courses, bodybuilding and a taxidermy fox on a skateboard.

That’s how the team at Rewilding Argentina trained the latest cohort of red-and-green macaws to be released in the Iberá National Park, a 1.8million acre stretch of wetlands and forest in the north of the country dedicated to conservation and restoration.

Before the rewilding programme, red-and-green macaws had been extinct in Argentina for 170 years.

Five of the magnificent birds – four females and one male – were released last month. Bred in Temaikèn Biopark in Buenos Aires Province specifically for rewilding – others in the programme have been rescued from the illegal pet trade – they first needed to learn how to survive in the wild before fulfilling their brief.

That task fell to Nico Carro and his team.

‘They came to us when they were around eight months old,’ says Nico. ‘First they had to go through a quarantine stage to check for problems or diseases that would prevent them from being released.

‘After that, they go on to the training stage.’

Key to their survival in the wild is the ability to fly long distances – particularly through forested areas – find food and evade predators.

‘When we have them in the training enclosures, we use a target – a rod about two metres long with a yellow tip – to make them fly from one perch to another,’ says Nico. ‘The perch consists of a long cane or bamboo, which has a piece of tree branch about 30 cm on top, where they can perch.

‘This is very important because the whistle is going to be used in the field to be able to call them to the supplementation stations.’

Supplementation stations will be used to help monitor the birds’ progress in the wild, calling them in for food to check on them occasionally – as well as tracking their location using a radio collar.

‘We usually start with short flights, just one or two metres away,’ says Nico. ‘As they improve their physical condition, they can fly 20 metres in the smallest enclosure or 30 in the largest enclosure and reach an average of 30 flights per day.

‘As we increase the number of flights, we also place obstacles in different places, so that they practice avoiding objects in flight.’

However, colliding with a branch or a vine mid-flight isn’t the biggest risk to a newly free macaw. On the ground deadlier threats abound.

Luckily, Nico has a plan for that too.

‘We also train them so they can perform vertical flights,’ he says. ‘These flights will be very useful for them to be able to evade predators on the ground and it also complements the bodybuilding part necessary to be successful in the field.’

Parrot bodybuilding is less lifting weights and more lifting themselves – quickly – out of harm’s way, learning to land, grab their food and take off again in one fell swoop. The team uses a pair of perches, one just a metre above the ground and the others increasing in height, to encourage vertical take-offs. Simple enough, but where’s the threat?

‘We train them so they learn that in the presence of a possible predator they must fly quickly and vertically until they reach a safe place, thus avoiding being hunted and devoured,’ says Nico, with an honest account of life in the wild.

‘For this, we placed some huts covered with grass about 15 metres from each other in the enclosure. Under one of them we put a taxidermy fox on a kind of skateboard, connected to a rope in the other hut. A motor in the second hut pulls the fox out.’

It looks far more scary than it sounds (because it sounds mildly comedic), and does a more than adequate job in scaring the birds away with no delay. The drills are run numerous times until they’ve learned not to dilly dally on the ground.

‘When the macaw reaches the ground then flies away in the way that we expect, as vertically as possible, we reward it – in this way they learn that by flying to a safe place and vertically, they get rewards.

‘This learning will then be used in the field if it encounters any predators. This is also carried out in the field to prove that, in another environment, they respond in the expected way to the same stimulus and that will give them the possibility of surviving in the field.’

Food-wise, teaching the macaws how to read the tropical menu of fruits and shoots around the wetland is not the only task. They also need to learn to identify and eat them quickly, done by mixing in native fruits with the food they’ve been raised on, gradually increasing the number and variety until they can deftly pick out the whole fruits.

‘In general, this training ends in the field where our colleagues place the supplementation stations in the trees that have those fruits that they can feed on so they learn which is the tree that bears the fruits that they already know,’ says Nico.

Teaching the macaws to feed on wetlands fruits is not just necessary for their own survival – it is an essential part of the ecosystem, the birds spreading the undigestible seeds as they go. This function is urgently needed in Iberá today following devastating fires that ravaged 60 per cent of the park earlier this year.

While fire is a natural part of the wetlands cycle, in normal times it would be limited to small pockets, kept from spreading by humid forest enclaves and marshes. But prolonged drought and higher than average temperatures due to climate change have left the region vulnerable.

However, a healthy, sustainable population of these magnificent birds to help mitigate this is the aim of Rewilding Argentina.

‘But it is difficult to say how long it will take to get to that point.

‘For now, we hope to have at least 20 breeding pairs in Iberá and surroundings in a few years.’

That will be 20 very well-trained, nimble and alert breeding pairs. And always on the lookout for skateboarding foxes.