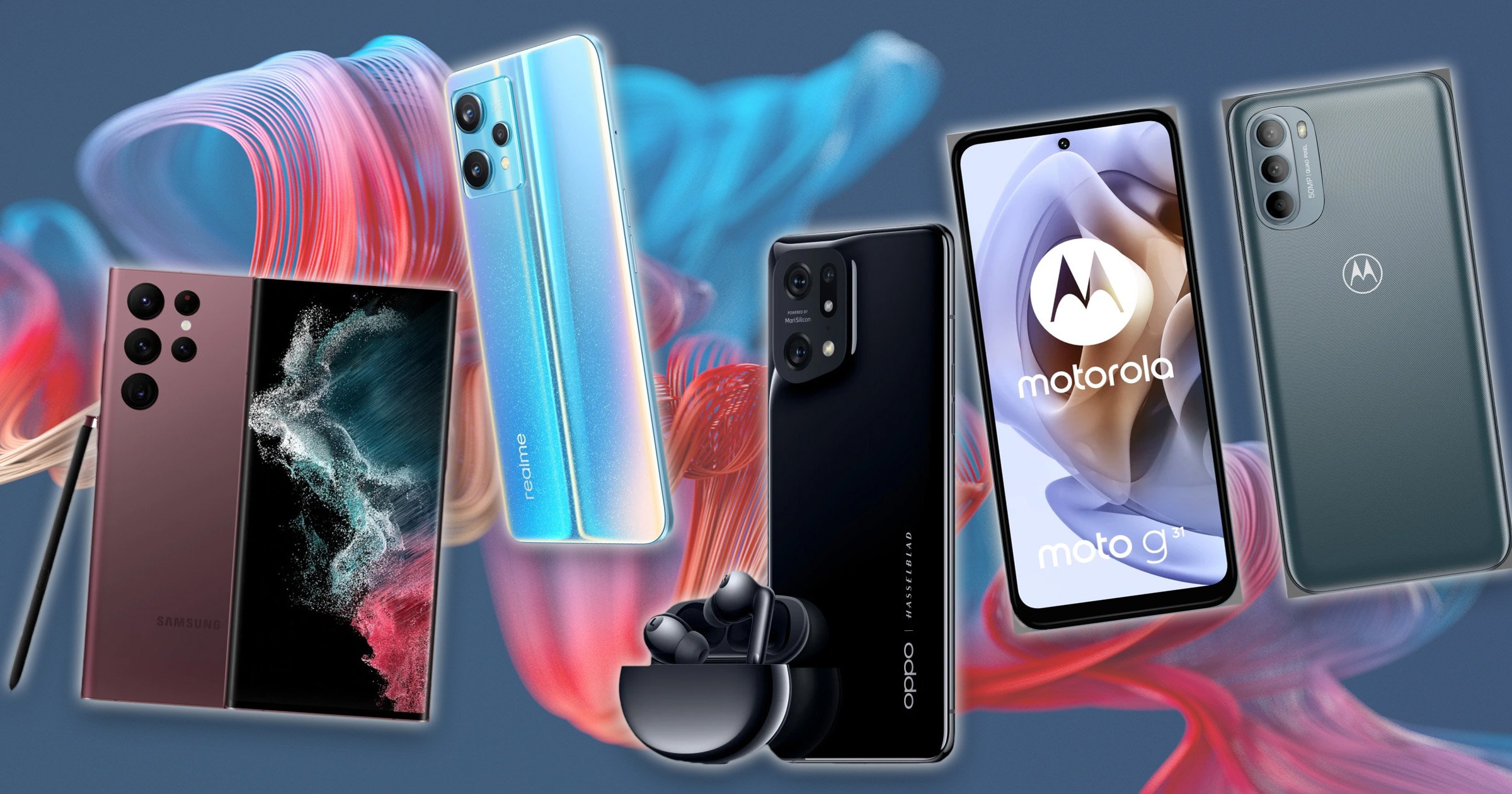 While the iPhone has its loyal fans, you simply can’t beat Android phones when it comes to choice.

Whether you want fantastic photography or super-long battery life, the wealth of choice means you can find exactly what you’re looking for from your handset.

And this year is off to a strong start for smartphones with an impressive line up of new releases.

We’ve already sung the praises of the bargain OnePlus Nord CE 2, and celebrated the launch of Samsung’s £1,149 Galaxy S22 which ‘brings two smartphone legacies together’.

Meanwhile Oppo has released the shiny new Find X5 Pro, which could be a serious contender for Samsung and Apple.

We decided to put them to the test, so you know which one to buy.

Here’s what we thought.

Budget phones always miss out on fancy flagship features but OnePlus is all about squeezing as much into its tech as possible.

Despite its price, everything from its sleek design to that punchy screen and lightning-fast 65W charging really sings.

The phone looks smart at first glance, with polished chrome-like sides and a rounded, comfortable-to-hold body, and it comes with a case in the box for extra protection.

Its 65W charger is among the fastest speeds you’ll get at this price, taking the battery from zero to 100% in around 30 minutes. An iPhone 13 takes around two hours.

While its triple camera can’t stack up to the Realme 9 Pro+, for example, the Nord is loaded with plenty of shooting modes, so if you know your way around manual photography, you’ll get great photos, while the 16MP selfie camera also hits the mark.

This phone is incredibly expensive but if you’re a photography enthusiast who loves to take full control over your photo and video capture, get ready to fall in love.

The phone has no less than three camera apps to choose from – Video Pro for casual YouTube-style videography, Cinema Pro captures manual footage that’s ready for the editing suite and Photo Pro, which brings Sony’s Alpha camera interface to the smartphone line for creative manual photography.

Its photos won’t be for everyone. The Xperia Pro-I doesn’t brighten up night-time scenes as much as Galaxys or iPhones do, and it also misses out on neat features like wireless charging or a massive zoom.

Nevertheless, the Pro-I is definitely a great-looking smartphone that gives photo and video enthusiasts plenty to sink their teeth into.

OLED is the most vibrant screen tech you can find on a smartphone and you seldom see it on low-cost phones, so the Motorola G31 instantly shines by having it.

While it may miss out on those silky-smooth refresh rates of the other phones featured here, it plays back streaming movies perfectly in their native 60Hz.

The phone’s 6.4in full HD+ screen is also a good size for watching on, especially with its widescreen aspect ratio. And, yes, the speaker’s sound quality isn’t great, but its headphone jack means you can plug in wired headphones or connect wirelessly with ease.

The phone also crams in a massive 5000mAh battery – the largest of our non-flagship phones on test, so we easily made it through one to two days without needing to charge it up.

As with the Nord CE 2, the G31’s camera can’t stack up to pricier phones, so if photography is your main love, we’d suggest stretching to the Realme 9 Pro+.

That said, Motorola packs in heaps of storage at 128GB, a responsive side-mounted fingerprint scanner, and a clean, nippy interface.

But it’s one of the most striking-looking phones around, with 6.8in of curved-display splendour at the front and a dust and water-resistant body available in seven colours, each with frosted finishes.

It’s expensive – pricier than any iPhone – and its battery isn’t as good as the S21 Ultra (though still lasts a day) but the screen quality is unmatched, with a smooth 120Hz refresh rate and an incredibly high max brightness. Even in direct sunlight, you should be able to see what’s on it.

With four cameras, a 10x zoom and a sky-high 108MP resolution, it’s also a photo champ. Unlike the Xperia Pro-I, its images are loaded with punch and pop.

And that S Pen is seriously responsive, using AI to predict what you write.

With smart tools like advanced handwriting recognition, drawing software and air gestures, it’s both a work and play powerhouse.

If you like the idea of quality photography but can’t justify flagship prices, the Realme 9 Pro+ has the same main 50MP camera sensor as Oppo.

The 9 Pro+’s photos pack depth, detail and zing, making it the ultimate photographer-on-a-budget’s choice, even if its ultra-wide and macro cameras are a bit underwhelming.

If you love watching movies and gaming, the Realme 9 Pro+’s Super Amoled screen is gorgeously rich, with saturated colours and deep, inky blacks. Matched with a smooth 90Hz and decent gaming performance for the price, the 9 Pro+ is very much a full package mid-range mobile, and it enjoys a giant 256GB storage.

In the box, you get a case to protect it from scuffs, as well as a SuperDart 60W fast charger, powering it up from 0-100% in little over 40 minutes.

Easily one of the best packages you can pick up for the price.

One of the most unique-looking phones we’ve ever seen, the Find X5 Pro’s design boasts a hardy ceramic back curving that’s just right for a comfortable in-hand grip with maximum elegance.

The 6.7in screen is vibrant, silky-smooth, and packs a high 1000Hz touch sampling rate, which is brilliantly responsive for gaming.

Helped by stereo speakers with Dolby tuning, it’s also excellent for movies, and with 256GB of storage, there’s plenty of space for apps and downloads.

The Find X5 Pro also has a clever chip inside dedicated to night-time videos, zapping grain and crisping them up.

While the zoom isn’t stellar, the main and ultra-wide cameras both have the same top-quality 50MP sensor, so photos and videos taken across both look excellent.

With fast Qualcomm Snapdragon 8 Gen 1 power, a large 5000mAh battery, and the fastest wired and wireless charging on-test, Oppo’s checking all our boxes.