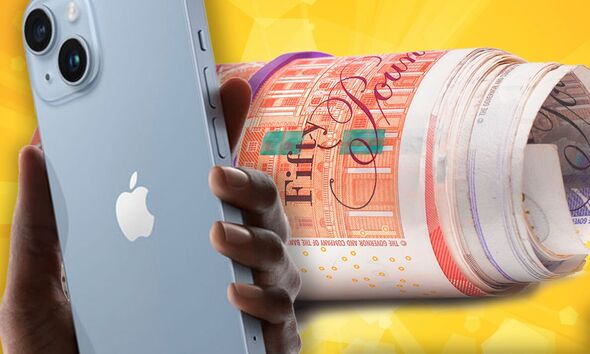 The iPhone 14 launched in September last year and if you’ve been patiently waiting for it to drop in price there’s good news. Some of the UK’s biggest retailers have now applied discounts to this latest device which is now making it a little cheaper to own. For example, if you head to Argos you’ll find the iPhone 14 is now £799 which is £50 off the original asking price. All five colours are available at this lower cost – including Blue, Purple and Black – with the store boasting on its website that this deal is selling fast and is in high demand. It’s a decent saving from Argos but there are even better deals.

If you’re happy with your existing SIM-only deal, you can buy the iPhone 14 outright to pair with any SIM. iPhone 14 usually retails for £849, but we’ve rounded up the latest deals

John Lewis and Amazon have both dropped things to £794 which cuts things but an extra £5. It’s not a huge difference but, right now, every penny helps so it’s definitely worth shopping around.

Along with that price drop, John Lewis is also offering up to £300 back in your bank account when you trade in your old device. That means you could own a new iPhone 14 for as little as £494!

If your balance is looking too healthy after Christmas and you don’t fancy paying out all that money in one hit then a trip to Three Mobile could be a good idea.

The UK network is currently offering the iPhone 14 for half the usual price. That means for the first six months of your contract you’ll pay just £30 per month to own Apple’s flagship phone. This deal even comes with fully unlimited data, calls and texts.

You can find out more about the Three Mobile iPhone deal here.

Get the iPhone 14 half price

Three Mobile is offering the new iPhone 14 for half the usual price. The deal includes unlimited data, calls and texts with the cost reduced by 50% for the first six months of the deal.

As a quick reminder, the iPhone 14 is Apple’s very latest smartphone and includes new features such as Crash Detection which alerts the emergency services after a car accident and even sends them a precise location to send help.

There’s also the ability to text via a satellite connection which means owners can stay in touch even when there’s no mobile signal.

Other features include a 6.1-inch Super Retina XDR display, an updated A15 Bionic processor with 5-core GPU that enables smoother graphics for video apps and better gaming.

Apple has also fitted its new handsets with a dual-camera system made up of an ultra-wide lens and a new 12-megapixel main camera with f/1.5 aperture and sensor-based stabilisation. That tech enables something called Action Mode, which smoothes out your video footage as you jog or sprint …like using an accessory like a gimbal or an action-focused camera, like GoPro.