As Apple introduces its eighth generation of Apple Watch, the wearable has slowly but steadily transformed from a curious experiment into the company’s second most important device.

In 2015, Apple was late to the wearable game, with fitness trackers and even smartwatches — from Samsung, Pebble and others — already on the market. The Apple Watch was an attempt to take the idea mainstream, but it wasn’t immediately successful. People were unclear on the benefits of what appeared to be a smaller iPhone but attached to your wrists. 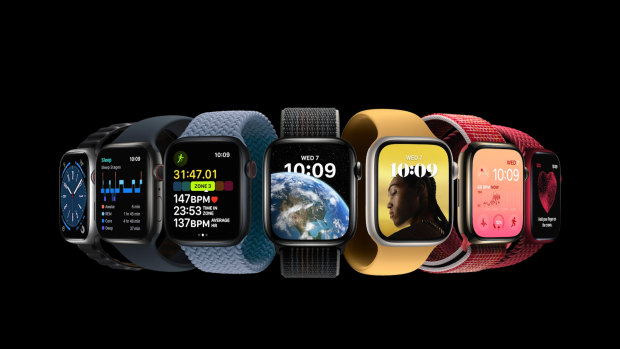 The latest Apple Watch Series 8 can do a lot more than count your steps.

Today Apple soundly dominates the space with a global 36.1 per cent market share, according to Counterpoint, with second place going to Samsung at 10.1 per cent.

A key to its success was Apple’s early realisation that the obvious function of the watch as a phone accessory — relaying notifications, allowing control of media, showing the time and temperature — was only a small part of its potential.

“It’s well understood that it’s not about using it as a Dick Tracy phone or a replacement for your smartphone,” said Foad Fadaghi, managing director at research firm Telsyte. Instead, it’s about collecting analytics from your body and movements that a smartphone is not privy to.

“Australians have adopted smartwatches and apps and integrated them into their health and fitness regimes. Devices like the Apple Watch are central to a lot of those programmes,” he said.

Apple sold about 400,000 watches in Australia in 2015, according to Telsyte data, but has been selling about a million per year since 2020.

Following the trajectory of the Apple Watch’s development, the company’s primary focus has been on supporting its ambitions in the health and wellness space, from basic fitness tracking the beginning to now being able to alert users to spikes in their heart rate or irregularities in their period, and contact emergency services if they take a hard fall.

The second and third generations of the watch added GPS for location mapping, water resistance for swimming, an altimeter for climbing and a cellular connection for use independent of the iPhone.

The fourth and fifth added an electric heart sensor with ECG capabilities, fall detection, a compass and an always-on display. The most recent models have a sensor to monitor blood oxygen saturation, a thermometer to aid sleep and fertility tracking and the ability to tell if the user has been in a car crash. 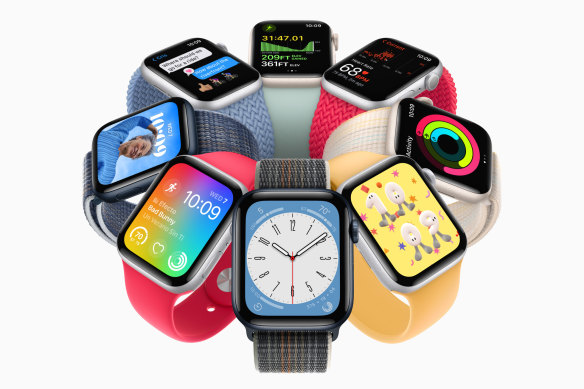 The $400 Apple Watch SE keeps most of the functionality at a reduced price.

Since 2016, Apple has also been careful to always offer a less-expensive version of the watch, knowing that users who begin tracking their health with it are likely to buy new models in the future. According to Telsyte, the repeat purchase intention for Apple Watch in Australia is more than 80 per cent.

“One of the interesting things is that the replacement cycle of the Apple Watch is currently two years while the iPhone is over three years. [Dedicated customers] are more regularly buying watches than they are smartphones. So it represents an important recurring revenue source,” Fadaghi said.

“At the same time only 44 per cent of the loyal Apple base, that is users with five or more Apple products and services, have an Apple Watch. Which shows it still has more to do to win some over.”

And that may be why Apple, in addition to introducing the $630 Watch Series 8 and a new version of the $400 Watch SE last week, also introduced a new $1300 model called the Apple Watch Ultra. Equipped with enough gear to handle extreme sports adventures or complex diving expeditions, the extra-rugged device aims to take on the likes of Garmin, which leads the market for premium smartwatches. The Watch Ultra can also last for up to 60 hours on a single charge, if users activate the strictest low power setting. 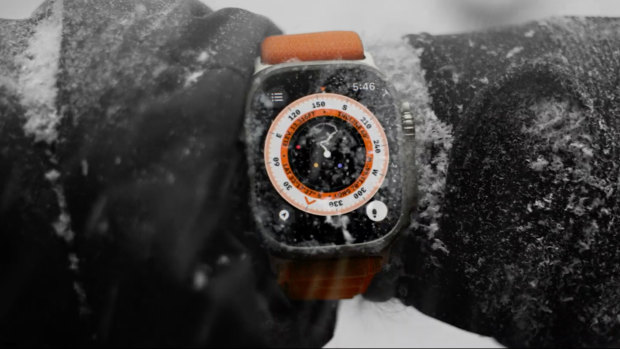 The Apple Watch Ultra is designed for rugged expeditions.

Overall the Watch holds an essential place in Apple’s overall lineup, not just because it makes money through sales but because it weds users to the tech giant’s ecosystem, arguably more so than the iPhone. As the best mainstream smartwatch on the market, both in terms of design and function, it can potentially sway users towards using an iPhone when they otherwise might choose something else.

And once they’ve begun to rely on the watch for their exercise results, period tracking or just as a reminder to move more often, switching to a different phone or watch becomes a difficult prospect. The Watch is also central to Apple’s paid Fitness+ subscription, which delivers video workouts via iPhone, iPad, Mac or Apple TV while keeping an eye on your vitals through the watch.

But Fadaghi said the close link between the Watch and Apple’s walled garden could also be a weakness. After buying Fitbit and partnering with Samsung, Google is set to unveil a watch this year that could leverage some learnings from Apple while undercutting it on price.

“Apple hasn’t had enough competition in the smartwatch market, and the arrival of a Pixel watch could really shake up its dominance, given that there are more Android users in Australia than iPhone users currently,” he said.