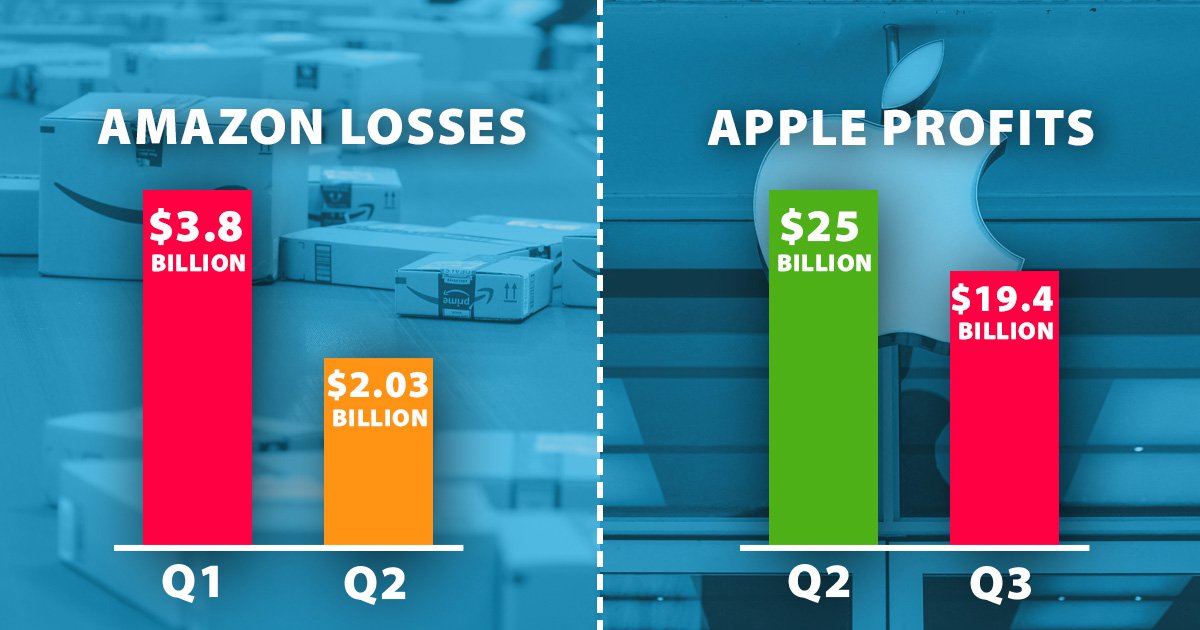 It’s been a bad year for tech giants like Apple and Amazon which have seen huge losses over the first quarter as the economy teeters on the brink of a recession.

Compared to a profit of £6.4 billion a year ago, the company posted a loss of £3.15 billion in this year’s first quarter, losing nearly £1.6 billion in the three-month period leading up to June 30.

This is its first quarterly loss since 2015 but the company still made £99.5 billion dollars in revenue.

The Seattle-based e-commerce giant said it was making progress in controlling some of the excess costs from its massive expansion during the Covid-19 pandemic.

Apple, the world’s largest technology company, is in a similar situation with slipping profits in the past quarter.

The company saw its profit for the April-June period decline by 10% while revenue edged up 2%.

Apple has been propped up by iPhone sales which saw a 3% increase from the same time last year. It marked the seventh consecutive quarter that iPhone sales have increased.

Apple had already warned that its revenue would be depressed by as much as $8 billion because of supply chain problems that have been compounded by pandemic-related shutdowns in Chinese factories that make iPhones and other Apple products.

Between 2019 and 2021, Amazon nearly doubled the number of warehouses and data centres it leased and owned to keep up with rising consumer demand from online shoppers during the pandemic.

But as consumers shifted their habits, Amazon now has too many workers and space, adding billions in extra costs.

Amazon’s chief financial officer Brian Olsavsky said that the company is slowing down its expansion plans for this year and the next to better align with customer demand.

Apple is a bit more optimistic as it expects supply-chain issues to ease during the July-September quarter. The release of its next iPhone 14 later this year should also keep its momentum going.

‘When you think about the number of challenges in the quarter, we feel really good about the growth that we put up,’ said Apple’s CEO Tim Cook.

Cook said that inflation was affecting Apple’s sales of wearable technology like the Apple Watch more than the iPhone. In the past quarter, revenue in Apple’s wearables division fell 8% to $8.1 billion.