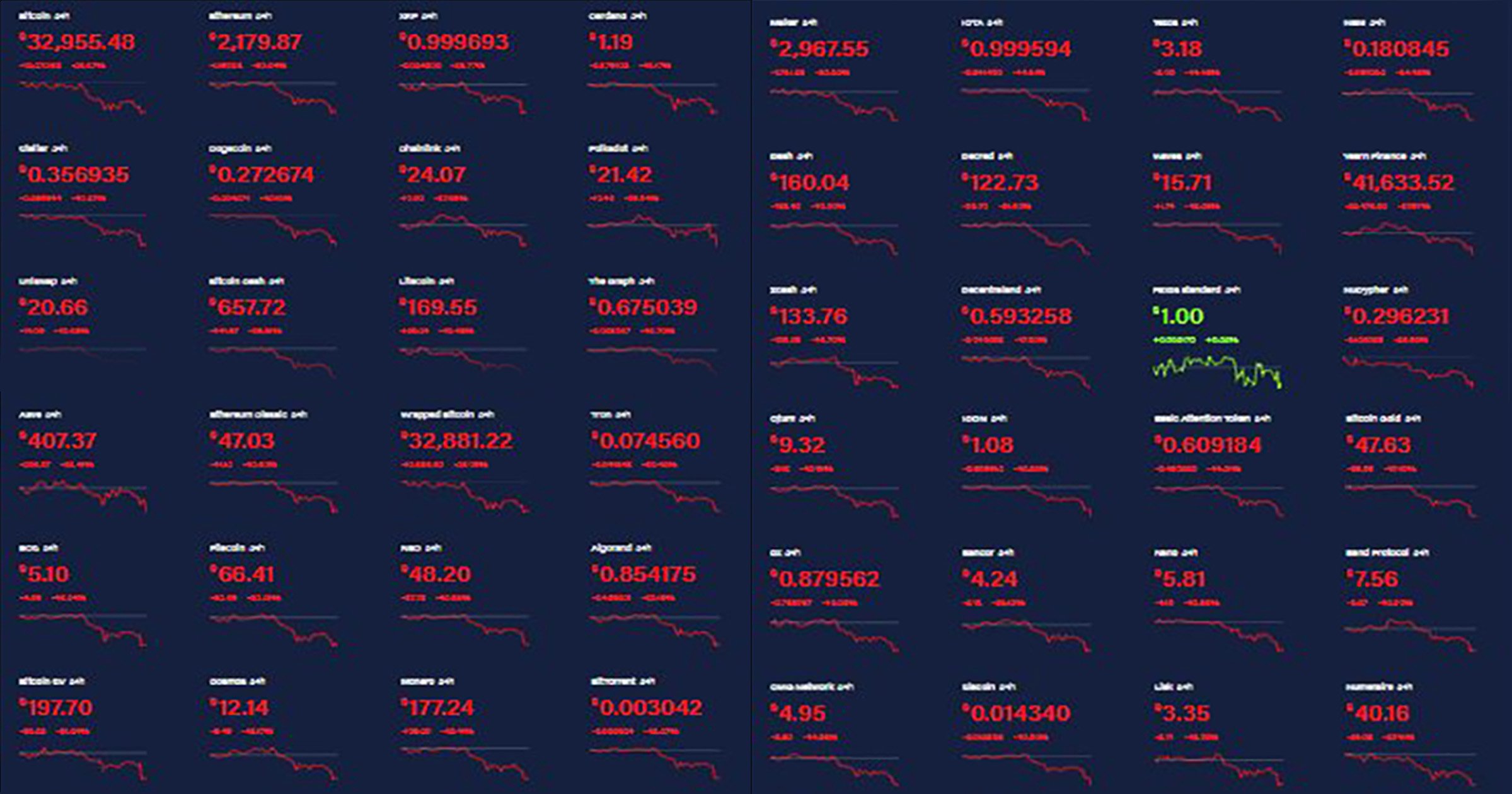 Bitcoin, Ethereum, Dogecoin and Cardano and almost all major cryptocurrencies have plummeted after China effectively banned digital currencies in the country.

Bitcoin has dropped 25% in value in the past 24-hour period, while Ethereum and Dogecoin have dropped by more than 37% in that time.

The drop, which started after Elon Musk tweeted that Tesla would no longer accept Bitcoin for car payments, was fuelled by China’s announcement that financial institutions would no longer be facilitating trades involving Bitcoin.

It’s the first time Bitcoin has fallen below $40,000 since February – and the largest cryptocurrency crash of its kind since December 2017 – when its price fell 45% in five days.

If the current price fall continues, it would mark the end of an almost four-year rise in price.

As of writing, more than half of Bitcoin’s value has now been wiped away since its all-time high in mid April.

Major cryptocurrency exchanges like Coinbase and Binance also appear to have service outages as users flock to the apps amid the crash.

Customers have also reported difficulty accessing their accounts for the exchanges, as well as for online banking apps that offer cryptocurrency trading, such as Revolut.

Many industry analysts argue that Bitcoin’s price volatility, and the potential for crashes like this one, make it difficult to use as a reserve currency – which many proponents have earmarked it as.

The volatility was a main reason that China gave for banning cryptocurrency, and that also prove Chinese authorities right, arguing it was ‘infringing on the safety of people’s property and disrupting the normal economic and financial order’.

China, which hosts more than 75% of the world’s Bitcoin ‘mining’, where new virtual coins are minted, banned financial institutions and payment companies from providing services related to cryptocurrency transactions.

The ban covers institutions like banks and online payments channels, and includes any service involving cryptocurrency, such as registration, trading, clearing and settlement.

While it hasn’t yet banned individuals from holding digital currencies, it did issue a warning against ‘speculative’ crypto trading.

In a statement, three Chinese industry bodies said: ‘Recently, cryptocurrency prices have skyrocketed and plummeted, and speculative trading of cryptocurrency has rebounded, seriously infringing on the safety of people’s property and disrupting the normal economic and financial order.’

It’s not the first time China has moved to restrict trading of cryptocurrency.

In 2017, China closed its local cryptocurrency exchanges, shuttering a speculative market that, at the time, accounted for 90% of global Bitcoin trading.

Two years later, in June 2019, the People’s Bank of China put out a statement announcing it would block access to both domestic and foreign cryptocurrency exchanges, as well as Initial Coin Offering websites, which many new cryptocurrencies used to launch.

At the time, the bank argued that virtual currencies ‘are not supported by real value’, that their prices are easily manipulated and that trading contracts are not protected by Chinese law.

China has been previously accused of currency manipulation of its own – under the Trump administration, the US accused China of manipulating its currency, amid a burgeoning trade war.

The US later reversed this label. In the latest move, China has made the initial restrictions by the People’s Bank more widespread.