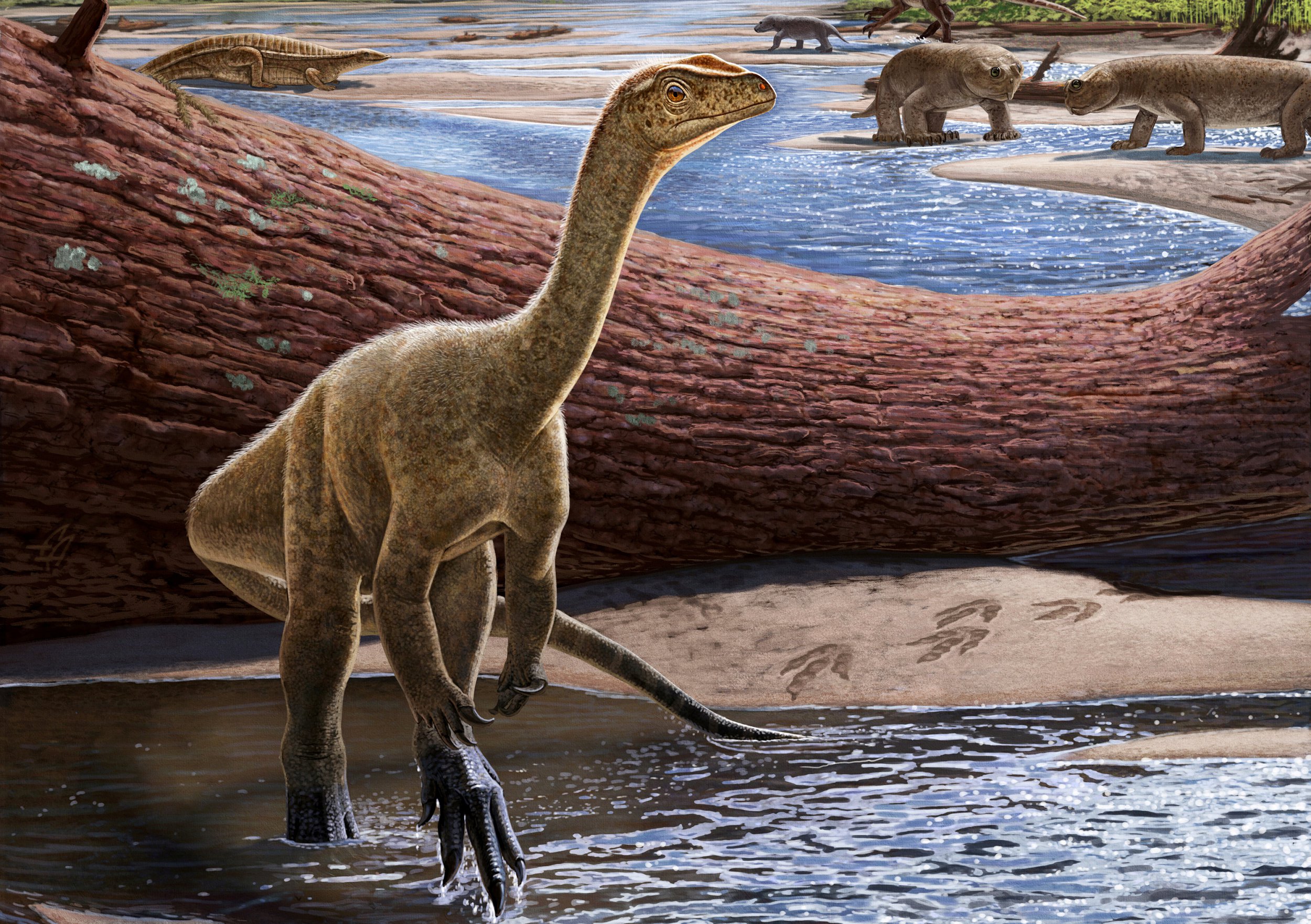 Africa’s oldest known dinosaur has been unearthed in Zimbabwe.

It lived 230 million years ago – and was one of the first of the legendary long-necked sauropods.

Named Mbiresaurus raathi, its discovery sheds fresh light on the evolution of the biggest creatures that ever roamed land.

They emerged in a temperate region in the far south of the ancient supercontinent Pangaea.

Dr Christopher Griffin, of Yale University in the United States, said: ‘Mbiresaurus raathi fills in a critical geographic gap in the fossil record of the oldest dinosaurs.’

The collection of bones resemble those of dinosaur remains from South America and India – suggesting similar vertebrates were widespread across this latitude band.

Dr Griffin said: ‘These are Africa’s oldest-known definitive dinosaurs – roughly equivalent in age to the oldest dinosaurs found anywhere in the world.

‘The oldest known dinosaurs – from roughly 230 million years ago, the Carnian Stage of the Late Triassic period – are extremely rare and have been recovered from only a few places worldwide, mainly northern Argentina, southern Brazil and India.’

Mbiresaurus was about six feet long from nose to tail and weighed up to five stone. Incredibly, its skeleton is mostly intact – missing only portions of the hand and skull.

Co-author Professor Sterling Nesbitt, of Virginia Tech in the US, said: ‘Early dinosaurs like Mbiresaurus raathi show the early evolution of dinosaurs is still being written with each new find and the rise of dinosaurs was far more complicated than previously predicted.’

Sauropods were plant-eaters that could reach 200 feet in length and weighed up to 120 tonnse. They included kids’ favourites Brachiosaurus, Diplodocus, Apatosaurus and Brontosaurus.

Mbiresaurus had a relatively small head – like its famous descendants. But it stood on two legs – not four. It sported small, serrated, triangle-shaped teeth – suggesting it was an herbivore or potentially omnivore.

Dr Griffin said: ‘We never expected to find such a complete and well-preserved dinosaur skeleton.

‘When I found the femur (thighbone) of Mbiresaurus, I immediately recognised it as belonging to a dinosaur and I knew I was holding the oldest dinosaur ever found in Africa.

‘When I kept digging and found the left hip bone right next to the left thigh bone, I had to stop and take a breath – I knew that a lot of the skeleton was probably there, still articulated together in life position.’

Michel Zondo, a curator at the Natural History Museum of Zimbabwe, added: ‘The discovery of the Mbiresaurus is an exciting and special find for Zimbabwe and the entire palaeontological field.

‘The fact the Mbiresaurus skeleton is almost complete makes it a perfect reference material for further finds.’