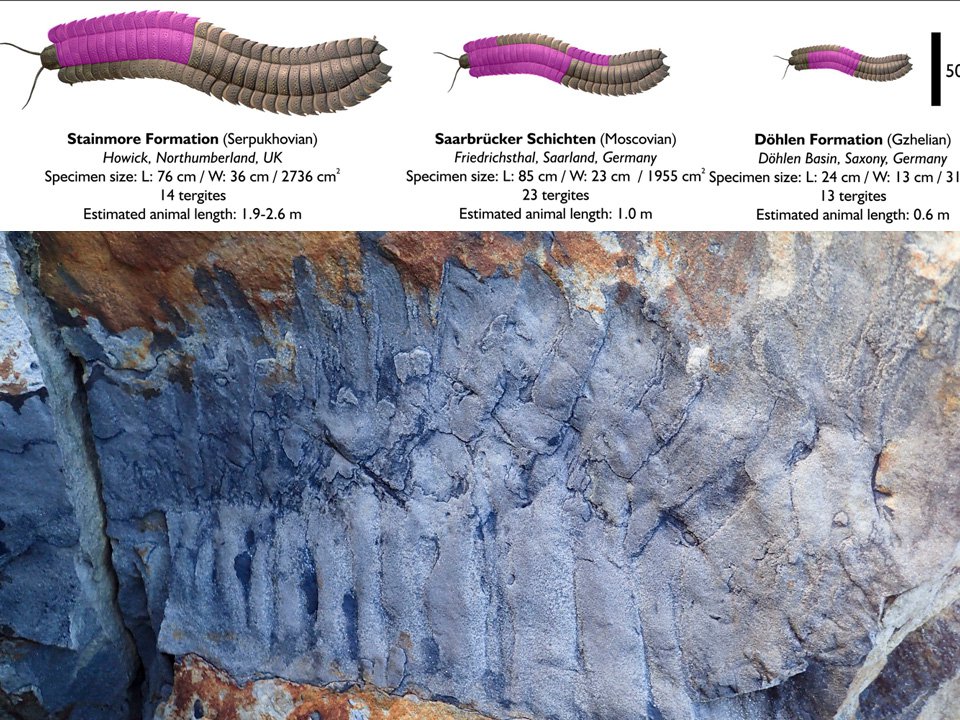 Researchers in England have chanced upon the fossil of a giant millipede that used to inhabit Northern England nearly 326 million years ago.

The fossil belonged to the Arthropleura, a creature from the Carboniferous Period, more than 100 million years before the Age of Dinosaurs. At the time, present-day England was situated near the equator, with a tropical climate.

Weighing around 50kg and 2.7 metres long, the Arthropleura is thought to have been a hunter.

The gigantic fossil was discovered by chance on a beach in Howick, Northumberland. The fossil segment was first spotted in 2018 when a large block of sandstone fell onto a beach at Howick Bay.

‘It was a complete fluke of a discovery,’ said Dr Neil Davies, from Cambridge’s Department of Earth Sciences and the lead author of a paper on the fossil.

‘The way the boulder had fallen, it had cracked open and perfectly exposed the fossil, which one of our former PhD students happened to spot when walking by,’ said Davies.

This specimen was found in what researchers believe to be an old river channel. It’s also possible that the fossil might be of an exoskeleton that was shed and not of the actual dead creature. The giant millipede is thought to have shed the exoskeleton near a riverbed, which was then preserved by sand.

‘Finding these giant millipede fossils is rare, because once they died, their bodies tend to disarticulate, so it’s likely that the fossil is a moulted carapace that the animal shed as it grew,’ said Mr Davies.

‘We have not yet found a fossilised head, so it’s difficult to know everything about them,’ he added.

Researchers believe the creature had between 32 and 64 legs. This fossil is just the third Arthropleura to be discovered and is far older and larger than the two previous specimens which were both found in Germany.

To get to such a large size, researchers think that the Arthropleura must have had a high-nutrient diet made up of nuts and seeds as well as small creatures and amphibians, meaning it hunted smaller invertebrates.

The fossil was removed with permission of Natural England and the landowners, the Howick Estate, and was taken to Cambridge for analysis. It apparently required four people to carry it.

Researchers believe that the creatures existed around the equatorial region for about 45 million years, before going extinct. Their extinction was possibly due to global warming that made the climate too dry for them, or due to the rise of reptiles which increased the competition for food.

The fossil will go on public display at Cambridge’s Sedgwick Museum in the new year.

The results are reported in the Journal of the Geological Society.