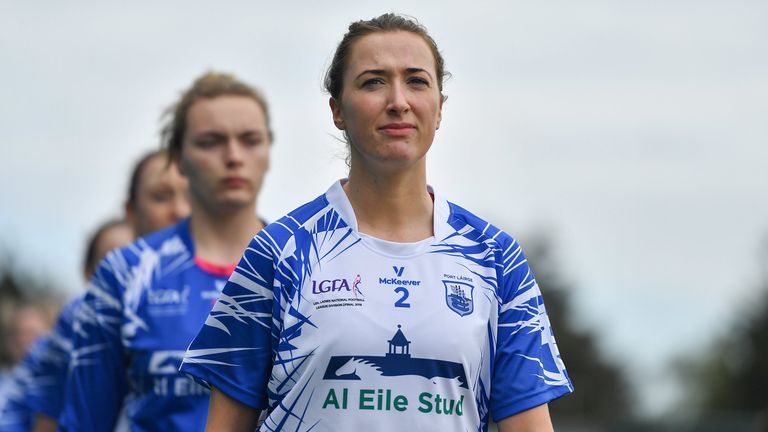 It’s fair to say that Karen McGrath had her apprenticeship well served by the time she made her inter-county debut back in 2011.

She was well versed in the dark arts of defensive play following years of backyard football with her four older brothers, while having her older sister Michelle ploughing seven years ahead in her footballing career meant progressing to the county set-up was an easy path for Karen to follow.

The Ballymacarbry club player was only 16 years old when she joined the panel in 2011, but long before then she had been welcomed into the inter-county bubble.

“Michelle had a massive influence on me. I followed her all the way up along, played with her on the club and county team as well,” said 25-year-old Karen, who is county captain again this year.

“When I was young, Michelle was playing here in the club and everything she did I had to do as well. Mam would bring the two of us over to training.

“When she was playing with Waterford, I was water-girl for them. I was at all their games, I knew all the players and when I got on to the panel it was easy for me. To have my sister on the team and having the experience of being in the dressing room and knowing the players and seeing what goes on was huge.

“It was great to have her there. She made going to training easier, she always looked out for me and had my back.

“She finished up with the county at the end of 2018. She actually retired at the start of that year, but then she missed it too much and she came back.

“It was strange not having her in there. She always had been there. I started in 2011, so for seven years we were going to county training together. Funnily enough, when she actually finished up and wasn’t coming to training, I found I was on time more than I used to be! She must have been the one making me late over the years!” Before Michelle retired, the sisters had experienced some memorable days together in the blue and white. The 2015 TG4 All-Ireland Intermediate final victory over Kildare at Croke Park still stands out – Karen was player of the match that day – while captaining the county to a 2017 TG4 Munster Senior championship victory over Cork comes in a close second for her.

“I had played in 2012 when Armagh beat us in the final, but in 2015 it was a bit different. I remember really enjoying the build-up to the game. There was such a good buzz in training, everyone was in really good form,” she said.

“It was the year Pat Sullivan took over and we did a massive amount of work that year. We had the work done and then on the day things went as planned.

“At half-time I was in the dressing room, I was sitting beside Michelle, and I remember telling her I wasn’t happy with my game. I felt the game was passing me by. But she settled me and told me I was grand, that’d it’d be alright.

“For the majority of the game we seemed to be in control, and winning it in the end was fantastic.

“Having my sister there, going up the Hogan Stand with her was extra special. It was definitely the highlight of my career so far.” When the game was called to a halt in March, Karen had her bags packed to head to Tralee with her new UCD team-mates for the Gourmet Food Parlour O’Connor Cup weekend, and after launching her PhD studies in January it would have been a great chance to get to know her colleagues a little better.

Born and raised on the family farm, it was a natural fit for Karen to progress into agricultural studies and research, and being back in academia has given her a real buzz so far.

“We live out in the countryside, and having the farm at home it’s a massive part of home life. I just loved it and decided it was the path for me,” she explained.

“I went to school in Clonmel in the all-girls school, but they didn’t have Ag Science as a subject, so myself and one of my friends went in to Cahir to study it every Tuesday in fifth year and sixth year.

“I went on to do my undergrad in Ag Science in UCD, and after that I did a year’s masters there as well. It was during my masters that I got involved in the research side of things and I liked that.

“I went off and worked for a year, and I applied for a PhD last summer and was accepted. I started back in UCD in January. I have another four years ahead of me now but I’m enjoying it so far.”

Like all her team-mates and inter-county opponents, the countdown has started for Karen as the LGFA seek a return to championship action in October.

She admits she has found the last few months difficult and has taken great solace from the regular contact from her club and county colleagues: