THIS is the dazzling moment Jadon Sancho showcased some silky skills to leave a rival on his BACKSIDE as Borussia Dortmund set up a German Cup final against RB Leipzig. 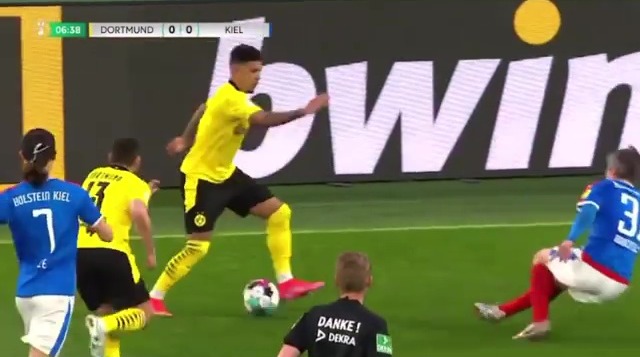 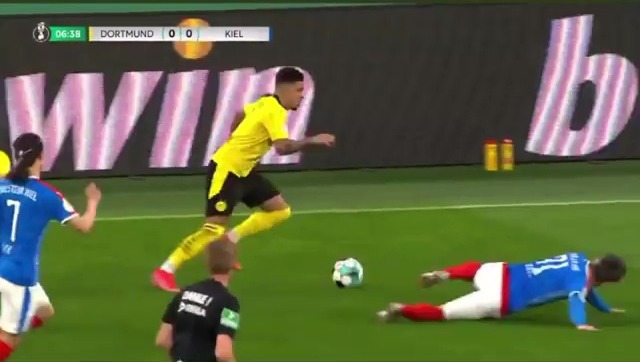 And Dortmund will go searching for a fifth German Cup triumph in ten days’ time as they bid to salvage an underwhelming season.

But it was a delicious piece of trickery from Sancho early on to leave Dortmund fans on the edge of their seats.

The wizard winger, 21, needed just six minutes to put his talents on display with a driving dribble against 34-year-old Fin Bartels down Dortmund’s left flank.

Sancho tickled the ball along as Bartels retreated before producing a couple of wicked feints.

And he promptly fell on his behind as his legs became tangled, allowing Sancho to turn on the afterburners and sprint away towards the Kiel penalty area.

Sancho has been at Dortmund since 2017 following an £8million move from Manchester City.

He’s since scored 46 goals in 133 games for the Bundesliga outfit.

But after Manchester United failed to bring Sancho back to the Premier League last summer, Dortmund chief Michael Zorc admits there is a gentleman’s agreement in place to sell Sancho for the right price.

However, this does NOT apply to star striker Erling Haaland – also a target for United, as well as Man City and Chelsea.

Sporting director Zorc told ARD: “We already had a gentleman’s agreement with Jadon last year that he can switch under certain conditions.

“He’s been with us for a couple of years. However, this agreement does not exit with Erling.

“In the end (with United), the requirements were not met.”