Super Netball great Bianca Chatfield has backed the Melbourne Vixens to leap from the bottom of the ladder last year, to premiership winners in 2022.

Chatfield, acknowledging she could be biased having played throughout her career for the Vixens, said the Vixens, who won the 2020 premiership in the first COVID-19 interrupted season, were burnt out last season and will return refreshed this campaign. 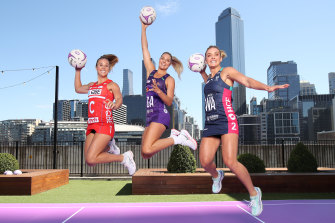 The Fox Netball commentator also sees big things for star signing Kiera Austin in the goal circle and the return of star playmaker Liz Watson, who showed she is back to her best while playing for the Australian Diamonds in January, and had high hopes for Collingwood after they signed shooter Sophie Garbin.

“To me, the Vixens were mentally drained towards the end of last season, I don’t think we’ve ever seen them finish last before,” Chatfield said on Wednesday.

“That hurts. Mentally that hurts and they have recruited well to make sure they cover all positions but they also need to stay injury-free because it always comes down to that.

“They have got the team, they could win it. No doubt.

“Collingwood have recruited well and we’ve seen what someone like Jodi-Ann Ward can do at goal defence and you add in Sophie Garbin who is the recruit of the off-season and they’ve got the talent to win it too.

“We just haven’t seen them put a season together and then be able to do some damage in the finals but this year there is no reason why they can’t.”

Chatfield gave birth to her first child, daughter Kyah, three weeks ago and she will be part of the commentary team for Fox Sports’ Super Netball coverage in a five-year broadcast deal. All Sunday games will be shown on Kayo Freebies, with all games live on Fox Sports and Kayo.

Netball Australia chief executive Kelly Ryan said Super Netball would trial some off-court protocols around testing, bigger squads and player movement at this weekend’s Team Girls Cup at Parkville in Melbourne and then get feedback for the season.

“There is definitely an element of protocol in what they should and shouldn’t consider doing in the lead-up to games,” Ryan said.

Ryan said the competition was starting early and would play some midweek games so it could end in the first weekend of July and allow players to prepare for the Commonwealth Games. Rescheduling any lost games would be hard to make up.

Super Netball premiers NSW Swifts will test out their COVID-19 resilience at this weekend’s Team Girls Cup with coach Briony Akle and several training partners unable to travel to Melbourne, having been a close COVID-19 contact.

Swifts star Paige Hadley said her side was up for the challenge of entering this weekend’s cup with only 10 players, with assistant coach Bec Bulley taking charge.

Hadley said the news was a shock for the players when they found out on Tuesday but everyone would get a good run.