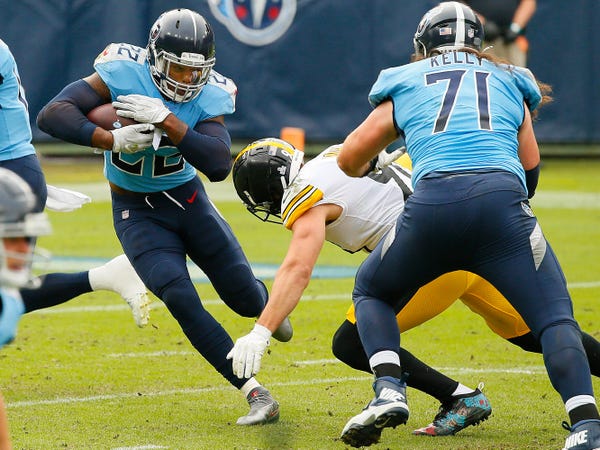 The Steelers defense showed up big against the Titans on Sunday, notably holding running back Derrick Henry to just 75 rushing yards — his second-lowest total all season.

Steelers linebacker T.J. Watt made one of the most impressive plays of the game against Henry late in the first half. With the Steelers up 17-7, the Titans had the ball with just over two minutes left in the second quarter and were hoping to start a drive that could close the gap before halftime.

On first down, Ryan Tannehill handed the ball off to Henry, who was met immediately in the backfield for a four-yard loss.

The Titans punted three plays later, and thanks to the quick stop, the Steelers wound up scoring another touchdown to extend their lead to 24-7 heading into the half.

Watt's stop of Henry came because he made a perfect play almost immediately as the ball was snapped, shooting the gap between the guard and tackle to meet the Titans running back before he knew what hit him.

According to Watt, the play wasn't instinctual but came from studying how his brother defended Henry a week earlier.

Lo and behold, back in Week 6, Watt's older brother J.J. could be seen pulling a near-identical move against the Titans on the same play — shedding his way through the gap between the guard and the tackle to stop Henry for a loss.

As the younger Watt told King, studying how his brother played the game has been a lifelong aspect of his football development.

"So when I first moved to defense [from tight end to outside rusher, at Wisconsin in 2015], I knew how to play the game, based on how my brother played. But I can't rush exactly like him because he's 290. [T.J. Watt is about 252.] So I watched him and learned, but I watched lots of players. I watched their steps, their rush, TV copy, coaches' film. Coach Tomlin says, 'We don't care where good ideas come from.' So this week, I'm watching my brother rush Derrick Henry, and I get some ideas."

Studying game film is obviously nothing new in the NFL, but for Watt, this week's study came with a little help from his older brother. Clearly, it paid off.