TIGER WOODS produced a win for the ages as he pulled on the green jacket for the fifth time, and bagged his 15th Major title, ELEVEN years after his last triumph.

And after a day when Augusta echoed to the Tiger victory roars for the first time since 2005, Woods let out a massive bellow of his own to signal that the Big Cat was king of the golfing jungle once again. 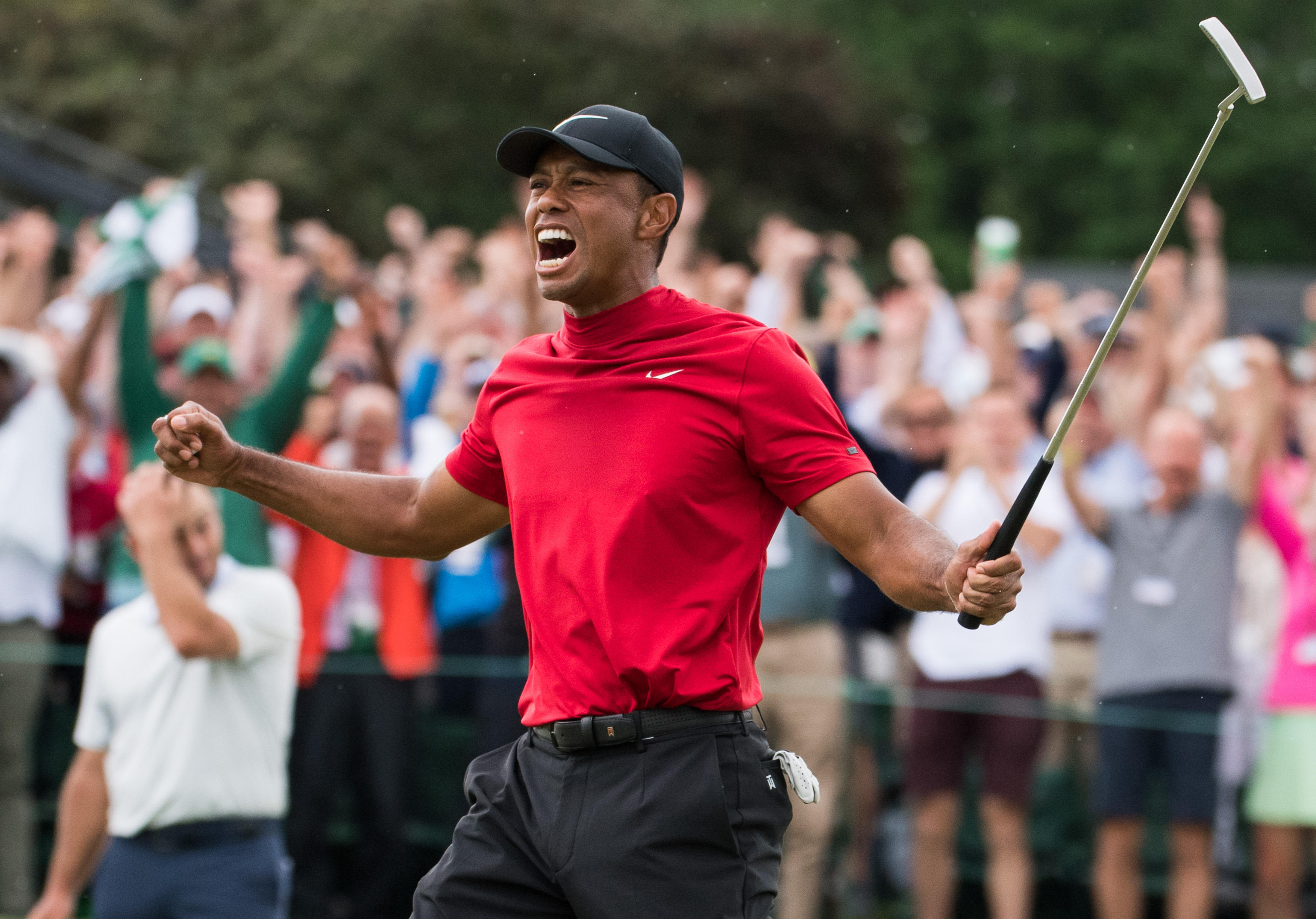 A two under par 70 in the final round took Woods to 13 under, and earned him a one shot win from fellow Americans Dustin Johnson, Xander Schauffele and Brooks Koepka – all of them top ten in the world, but very much second best here.

Woods, 43, hugged mum Tida and his two children – daughter Sam and son Charlie – and walked off the 18th to deafening chants of 'Tiger, Tiger'.

And maybe the “impossible dream” of overhauling Jack Nicklaus’ record tally of 18 Majors could become a glorious reality.

The nest two Majors, the USPGA and US Open are at Bethpage and Pebble Beach.

Both are courses where Woods has won Majors in the past – in the case of Pebble, by a staggering 15 shots – and he will have as much chance as anyone when the Open heads to Portrush in July.

This was win was unique among Woods’ 15 Major victories, as Tiger proved he CAN change his stripes to complete the greatest sporting comeback of all time.

Winning the Masters from two shots off the pace, after landing every one of his previous Major titles with at least a share of the 54 hole lead, writes a remarkable new story in the Tiger Woods story.

His victory, at the age of 43 and after 11 years in the golfing wilderness, is nothing short of mind-boggling.

In that lost decade a new generation of hungry, fearless cubs had emerged, and the depth of talent on golf has never been greater.

And this Tiger is a much-wounded animal, after countless knee surgeries and four back operations, the latest to fuse two vertebrae together in his spine in one final desperate attempt to improve his standard of life.

Woods himself admitted his hope was that operation would at least allow him to play with his kids, relatively pain-free. He never dreamed he would be able to play golf again at the highest level.

So the fact that he has added another Major so long after winning on one leg at Torrey Pines really does make this the greatest comeback since Lazarus!

Augusta’s greatest fairy-story, used to belong to Jack Nicklaus – winning his 18th Major title at the age of 46 with a sensational victory at the 1986 Masters, six years after his 17th Major win.

But Woods’ achievement surely tops even that unforgettable triumph. And after seeming destined to finish his career as the second best golfer of all time – behind Nicklaus – he may just have given himself a shot at the No 1 spot.

Golf is a sport where players are winning Majors much earlier in their careers, with twentysomethings Kopeka , Rory McIlroy, Jordan Spieth, Patrick Reed and Justin Thomas sharing 12 victories in the last seven years.

But try telling Woods golf is a young man’s game.

He watched impassively as playing partners Francesco Molinari and Tony Finau – as well as Koepka and dangerous-looking Ian Poulter – all dumped balls in the water at the 12th hole and ran up double bogeys.

Needless to say, Woods made par there, and when third round leader Molinari also found the water at the long 15th, Tiger pounced.

A flawless two putt birdie at 15 was followed by a gorgeous tee shot at the short 16th, and his birdie there meant he had a two shot cushion playing the final hole.

He played it safe, settling for a bogey – but no-one will remember that, let alone hold it against him

Woods and most other top golfers have always preached the mantra that Majors do not really start until the back nine on Sundays.

But as usual, there were plenty of spills and thrills to enjoy before the leaders got to the tenth tee.

Woods struck the first blow as he curled in an eight footer for birdie at the third, cutting Molinari’s two shot overnight lead in half.

But three-putt bogeys at the fourth and fifth while the seemingly unflappable Italian was racking up the pars meant the lead was up to three shots, without Molinari having to pull any rabbits out of the hat.

But Woods went birdie-birdie on seven and eight, and kept pulling off the clutch shots whenever he needed them.

That green jacket looks good on him. It has been a long time since he was fitted for a new one – too long.

But you sense it may not be the last one he tucks away in the wardrobe.