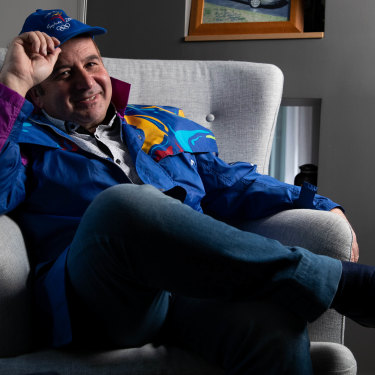 H aving seen an ad in the paper and decided he had to be part of the Sydney Olympics, Gary Merlino's time to shine drew near.

Fresh out of two years of training, the electrician was supposed to be a volunteer chauffeur for the Venezuelan team. But hours after Cathy Freeman lit the Olympic cauldron, his dream was over.

"They cancelled the morning after the opening ceremony – I was at a loss," he said, 20 years on.

Then the phone rang again. 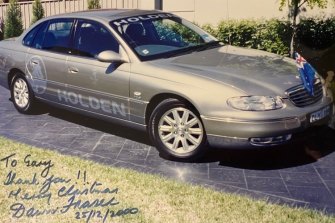 A photo of the Holden car that Gary Merlino used to chauffeur Dawn Fraser in 2000, autographed by the Olympic great.

"They asked me to go pick up Dawn Fraser – and after one trip she said, 'Will you please be my driver?' And I just stayed with her for 17 days."

Assigned the of task driving Fraser as well as Peter Brock, Laurie Lawrence, Herb Elliott and other doyens of Australian sport, Merlino said it was a whirlwind couple of weeks.

"She didn't treat me as just a driver – she was invited to parties every single day and took me," he said.

Fraser told the Herald that International Olympic Committee boss Juan Antonio Samaranch had made her the "first lady" of the Games, giving her carte blanche to attend whatever events she liked – keeping her driver very busy but entertained.

"There was always something going on," Merlino said. "It was one of the most special times I can remember in Sydney in my lifetime."

He even had a brush with US political royalty when he saw Chelsea Clinton at the dressage.

"He was a hell of a driver too, always on time," Fraser said.

He made such an impression that he got a mention in her autobiography.

“The volunteers made the Games," she said. "They used to sing to people getting off trains and planes and were always so very helpful, not just to the officials but to the general public as well – they all felt so looked after. 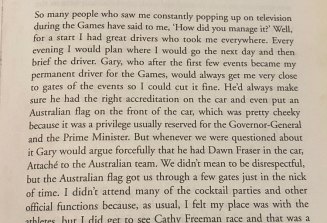 “You could hear the lovely comments around the village and venues about how well organised it was and how they had just made everyone's journey so very easy."

Merlino's story is one of tens of thousands – 46,967, to be exact – of regular Australians who volunteered hours upon hours of time in training workshops, and then more than two weeks of their lives to volunteer at facilities around Sydney for the Games.

Long after the Olympics had left town, those iconic blue and white shirts remained, like a badge of honour for everyone who wanted to be part of the biggest sporting event the country had seen. Pick a random suburban sports field or shopping centre, and chances are you'd see a few people wearing them. 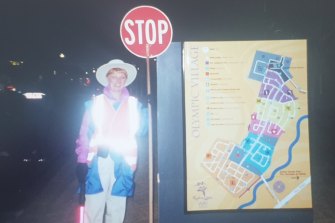 Dianne Roberts at the Olympic village in 2000.Credit:

"I just thought it was a great opportunity to be a part of the Olympics – I was so lucky to be part of it," said Dianne Roberts.

She put her job in the Education Department on hold to go and work in the Olympic village as a lollipop lady.

"The athletes were all so nice – and I met different people that I never would have met otherwise – it was just a great experience."

Roberts kept all of the memorabilia and clothing from her time at the village, and proudly displays it two decades on.

"Everyone just felt that volunteering was such a great thing for Australia."

Greg McMillan, an RMS worker in Sydney, checked tickets, directed people to seats and manned checkpoints in and around Stadium Australia.

"I wanted to be part of it somehow – it was a once-in-a-lifetime thing," he said.

"I was there the night Cathy won, in the aisle as an usher that night."

He also saw Cameroon win gold in the men's football tournament, beating Spain in the final on penalties.

"It was everything for me – just to be part of Australia's history, and Sydney's history."

A proud Lebanese-Australian, and born in Ghana, Jim Couri was a volunteer at the Olympic village assigned to "meet and greet" dignitaries.

"One day an African gentleman walked in and said "Hi, I'm the Chef-de-Mission from Ghana," Couri recalls.

"I welcomed him in his own language and he nearly fell backwards.

"Turns out he lives in the same suburb I used to live in and I started talking to him in Pidgin English. He couldn't stop laughing." 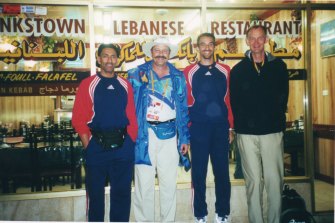 Jim Couri with members of the Oman team at Bankstown Lebanese Restaurant.Credit:

Couri took long-service leave from his job as a controller at an industrial gas plant to volunteer, his main role as assistant for the Oman team.

He also helped Olivia Newton-John to her feet as she tripped over a cable during dress rehearsals for the opening ceremony.

"She fell arse over head, but she never stopped singing," he said.

Some of the Omani athletes would use him as a conduit to sneak cigarettes out of the building without their coaches knowing, and they would beg him to take them to Bankstown Lebanese Restaurant every night.

"I shed a tear or two when they left – I was on such a high while the Olympics were here and then it stopped suddenly," Couri said.

For others, such as Barbara and Laurie Smith, the Olympics are a lifelong obsession.

Laurie went by boat to Mexico City in 1968 to watch some of his friends in swimming events, and the pair honeymooned to the Los Angeles Games in 1984. They were never going to miss the chance to be part of 2000. 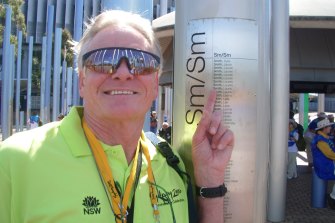 Laurie Smith poses next to his name on the honour roll outside Stadium Australia.Credit:

"It was our time to shine, both as a city and a nation," Barbara said.

Since volunteering in Sydney, where Barbara was a team assistant for Kenya and Laurie for Brazil, they haven't missed a Summer Olympics.

"Sport and volunteering have changed our lives so much," Barbara said.

So much so that Laurie literally wrote the book on volunteerism at the Olympics, titled Living Is Giving: The Volunteer Experience.

The Smiths were part of the first 500 people to put their hands up to help in Sydney – know as the "pioneer volunteers".

But when they and three others were sitting at the closing ceremony of the Paralympics (having volunteered at both), listening to the Seekers sing The Carnival Is Over, the emotion became too much.

"We were all crying as the whole experience of the Olympics and the Paralympics were so emotional, so tiring, so amazing," Barbara said.

"It was the highlight of our lives and we didn't want those friendships to finish."

Three times a year, from 2001, their group, known as "Spirit of Sydney", got together at the Athenian Restaurant in Sydney – dressed in their volunteer's shirts, of course. 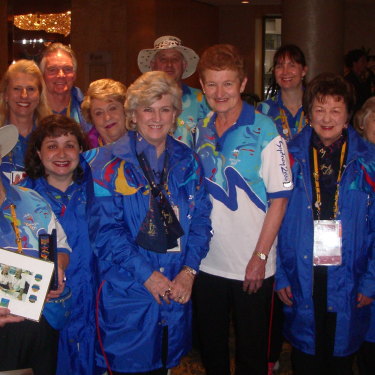 Barbara and Laurie Smith (back row, second and third from left) and other members of the Spirit of Sydney club at their 10-year reunion. Credit:

"We then got a bit more organised and had our own shirts made and our website and later a Facebook page," Barbara said.

Every year the group – still about 30 or so – get together on or around the 15th of September for lunch and try to volunteer at sporting or civic events.

"Most of the members have always volunteered their whole lives, even though Sydney was the most exciting gig of all."

These stories are just a handful of the nearly 50,000 that made the Sydney Olympics what it was – and part of the reason why IOC president Juan Antonio Samaranch declared the Games the best ever.

Sadly, Samaranch's wife died during the Games, and a memorial service was held in Sydney, which xFraser attended.

When she returned to her car, the Australian flag on the electric aerial was at half-mast.

"Gary, you think of everything," she said when she got back in the car.

"It was a fluke that it happened," he laughed. "It got stuck on the way up!"