The famous four were spotted hanging out together at Coeur d’Alene on Tuesday.

Kendall, 24, wore a tie-dye crop top as she walked down a road with her beau, 23, who was clad in a black T-shirt and backwards hat. 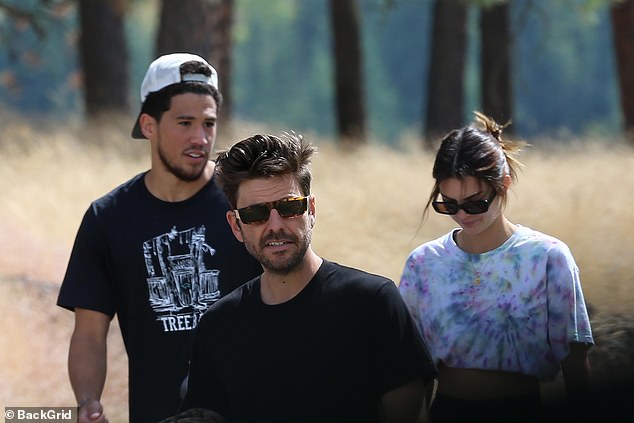 Double the fun! Kendall Jenner and Devin Booker enjoyed a couples retreat to Idaho with pals Hailey and Justin Bieber 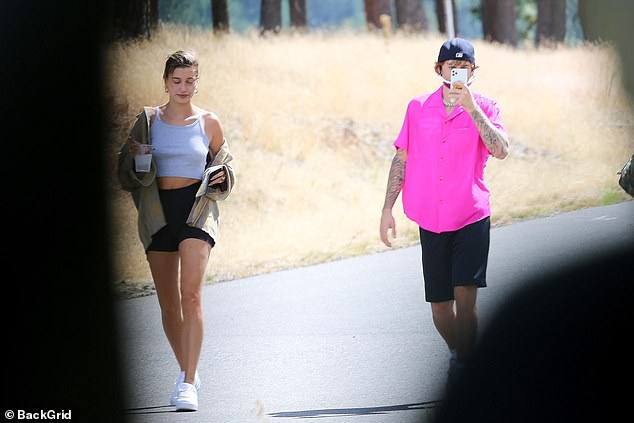 The great outdoors: Hailey and her husband Justin strolled down the street with their friends

Hailey wore a grey crop top, biker shorts, white sneakers, and a jacket dangling over her shoulders, while her husband opted for a flashier look with his hot pink shirt.

Justin enjoyed the sunshine in a button down shirt, black shorts, and backwards cap.

The Baby hit-maker managed to walk down the road even with his attention fully locked on his phone. 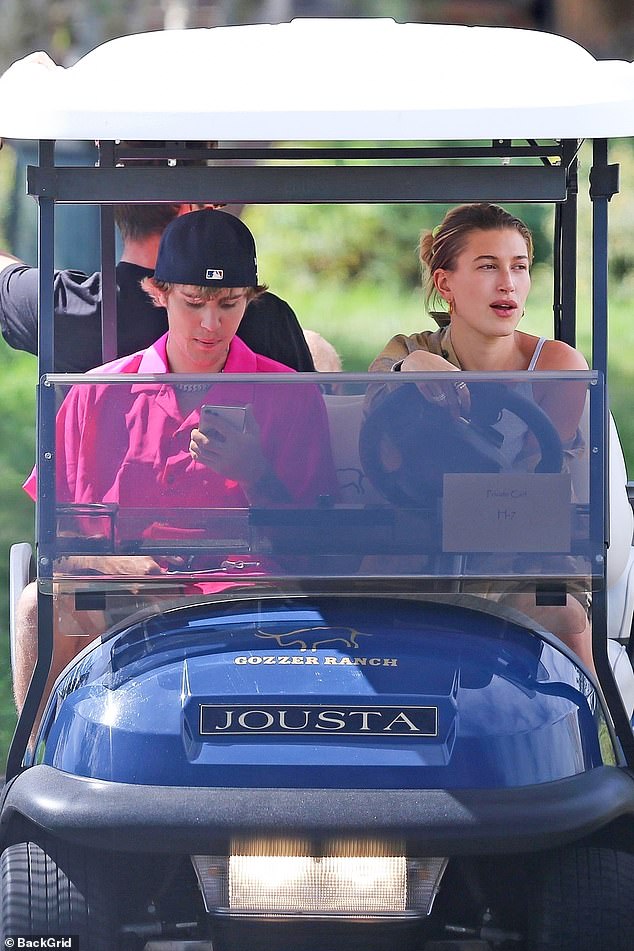 In the driver’s seat: Hailey drove Justin around in their golf cart 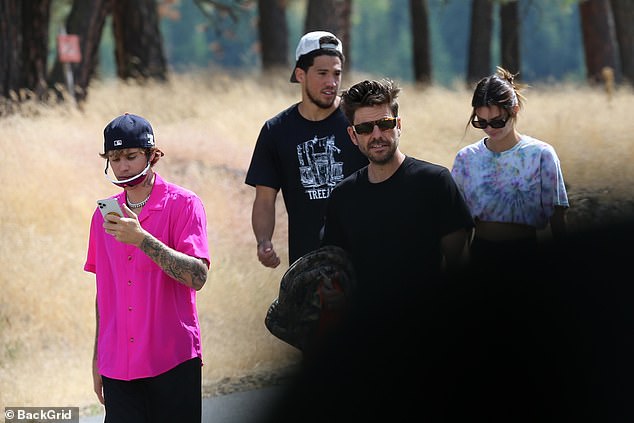 Fun with friends: Also joining the group was Justin’s long-time road manager, Ryan Good, who strode at the front of the pack

Also joining the group was Justin’s long-time road manager, Ryan Good, who strode at the front of the pack.

The five appeared to be taking a breather by a fenced-in ledge, where Kendall rested her arm while checking out the views.

Hailey and Justin gave their feet a break as they hopped on a golf cart.

The model drove her husband around as Justin continued scrolling through his cellular device. 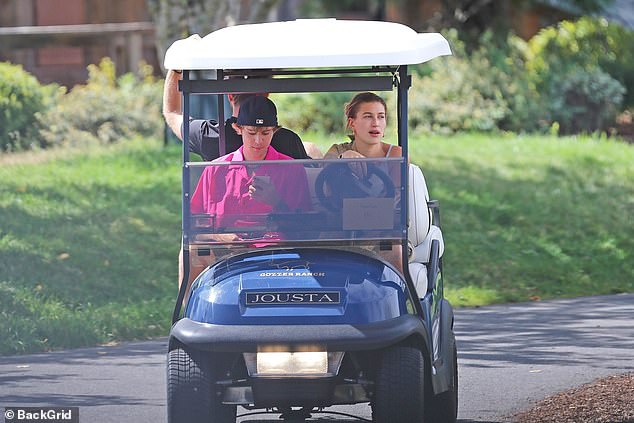 Tuned in: Throughout the outing, Justin was glued to his phone 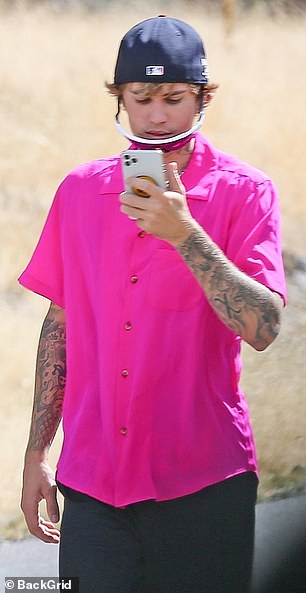 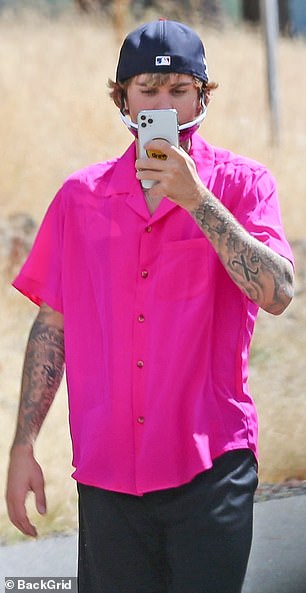 Techie: Bieber could not put his phone down 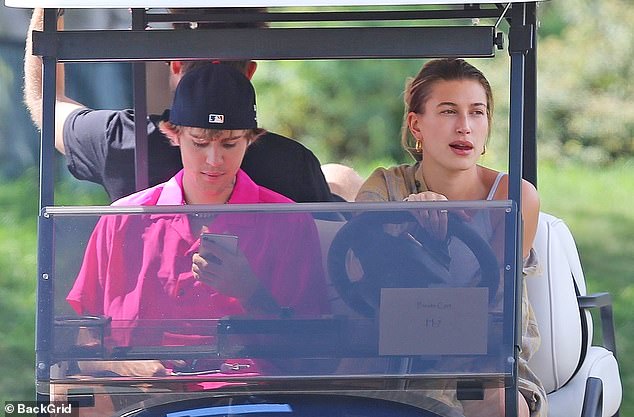 Giving their feet a break: The couple momentarily relaxed inside the cart

Hailey, Justin, Kendall, and Devin have been making the most of their time in the great outdoors these last few days.

Hailey and Justin have been spotted splashing around the waterfront, while Kendall has been posting snippets from her time in the great outdoors.

On top of sharing sizzling bikini snaps, Kendall shared a peaceful video of her set-up at the lake. 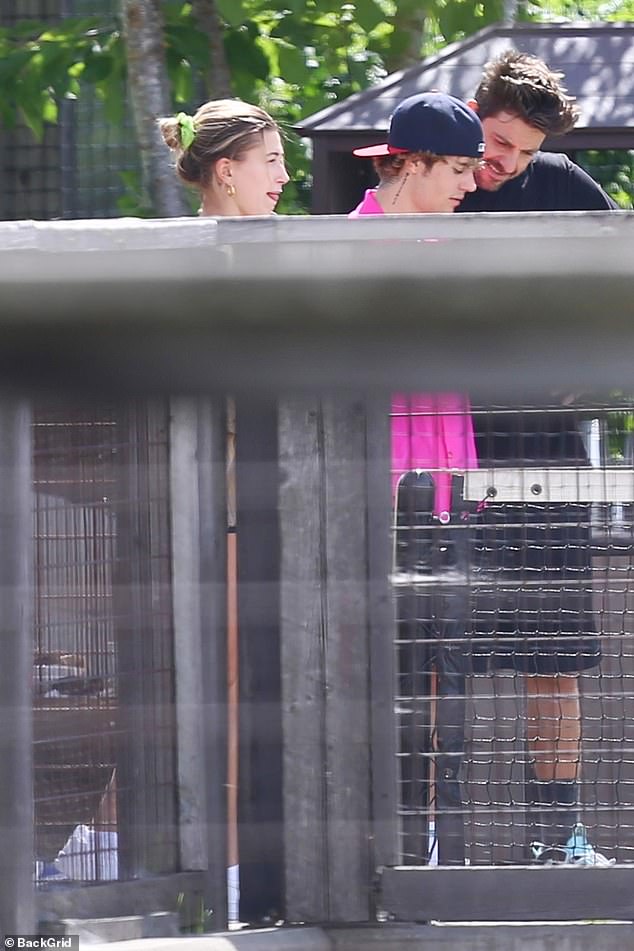 Taking a breather: The five stopped by a fenced-in ledge 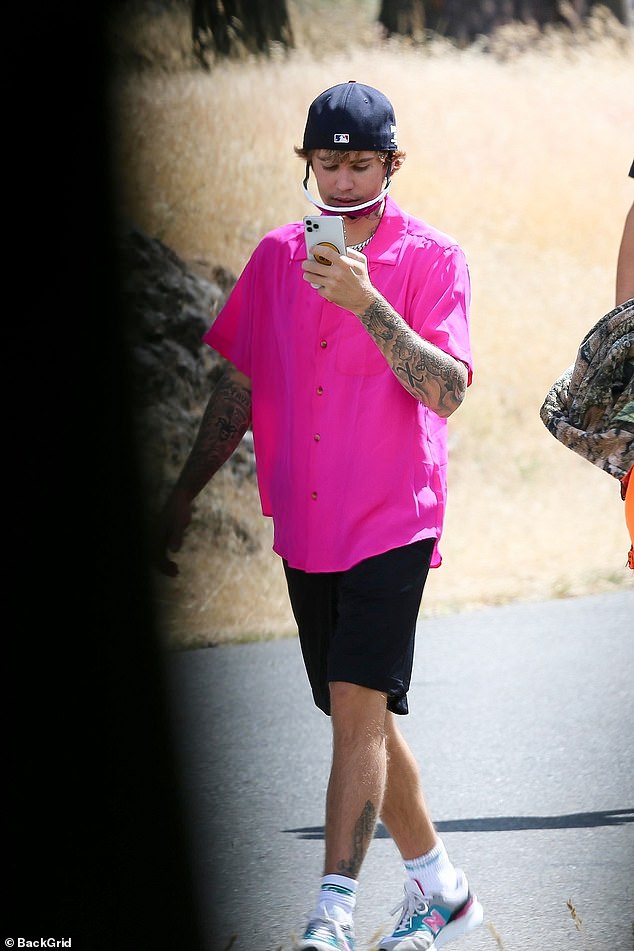 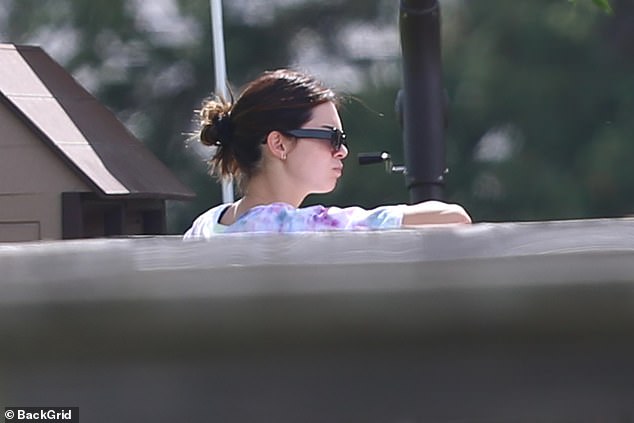 Taking it easy: Kendall rested her arm while checking out the views

Kendall laid out two striped towels upon a dock, which bobbed about with the current.

In addition to laying out beneath the sunshine, Kendall went jetskiing and  enjoyed an evening by the campfire.

Kendall and Devin have been hanging out more and more frequently during quarantine.

The duo have been at the center of dating rumors for the last few months, but in mid-August they all but confirmed the speculation during a PDA-infused beach day.

Devin had previously dated Jordyn Woods, who was cast out from the Kardashian–Jenner orbit after Khloé Kardashian’s then-partner Tristan Thompson kissed her at a party. 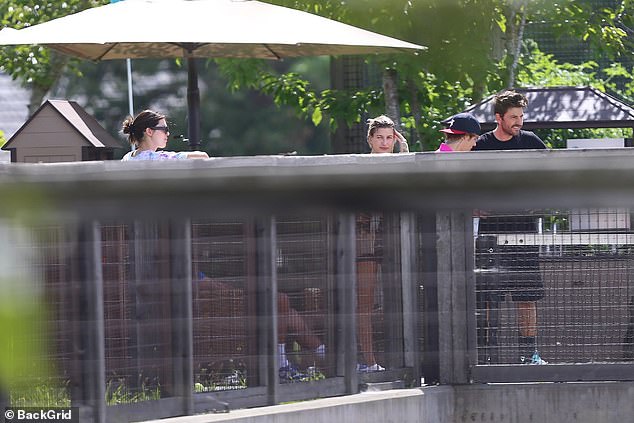 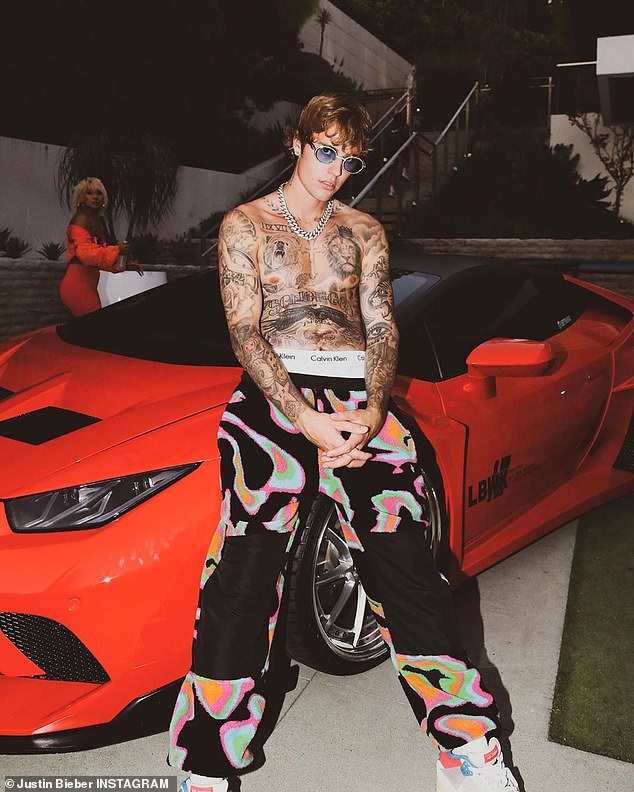 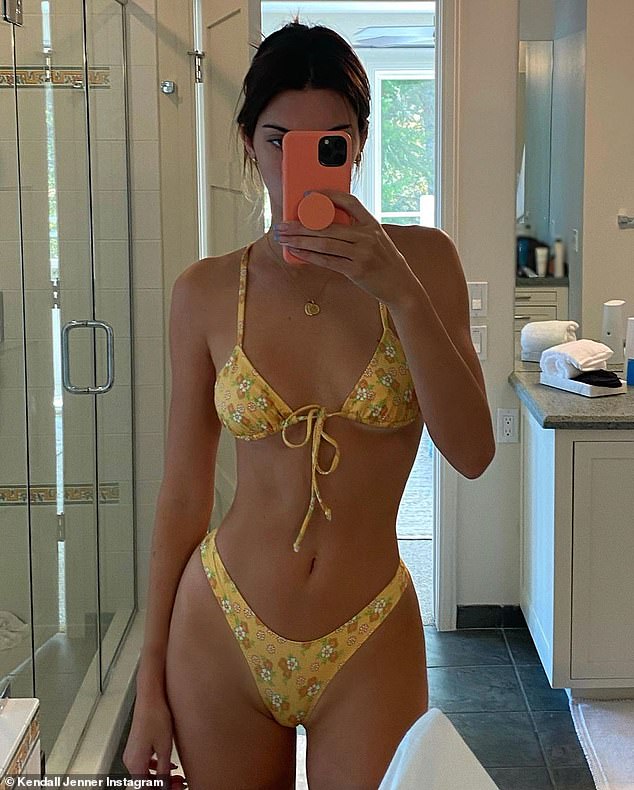 Bikini babe: Kendall shared a snap of herself in a yellow string bikini during her Idaho getaway 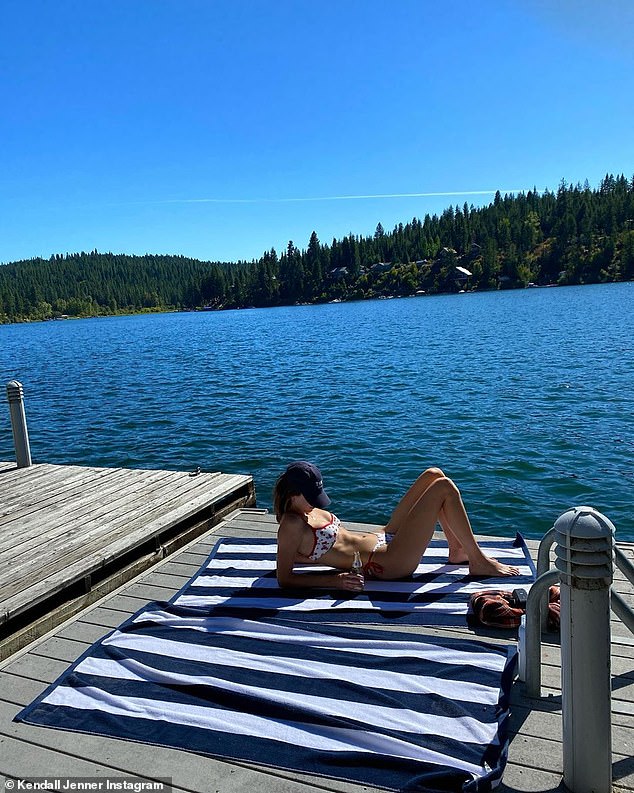 Soaking up the sun: Kendall laid out two striped towels upon a dock, which bobbed about with the current