STORY OF THE MATCH

The unbeaten Northern Superchargers moved to the top of the table and ended Oval Invincibles 100 per cent start to the tournament with victory in a low-scoring thriller in Leeds.

All-rounder Alice Davidson-Richards starred as she thumped 42 from 30 balls as the Superchargers, having lost the in-form Jemimah Rodrigues (14 from 10 balls) early, struggled their way up to 109-8 from their 100 balls.

The Invincibles’ 16-year-old sensation Alice Capsey was excellent with the ball, bowling with incredible discipline to take 2-9 from her 20 balls but was unable to continue her good form with the bat as she fell to Davidson-Richards in the powerplay.

With Georgia Adams going well, the Invincibles appeared on track to chase down a relatively low total with ease but Katie Levick had Adams caught just before the halfway stage of the innings and runs quickly became hard to come by.

A late surge from Invincibles captain Dane van Niekerk (27no from 21 balls) brought the visitors back into contention but with 10 needed from the last five, Davidson-Richards held her nerve, dismissed Sarah Bryce (29 from 33 balls), and took the Superchargers to a win by four runs.

The Superchargers all-rounder was named Hero of the Match and seemed to be involved in just about everything that went well for the home side.

She came in with the Superchargers in a tricky spot having lost their star batter, Rodrigues, and captain, Lauren Winfield-Hill and with runs in short supply. Scoring remained difficult for everyone throughout the innings, everyone other than Davidson-Richards, that is. 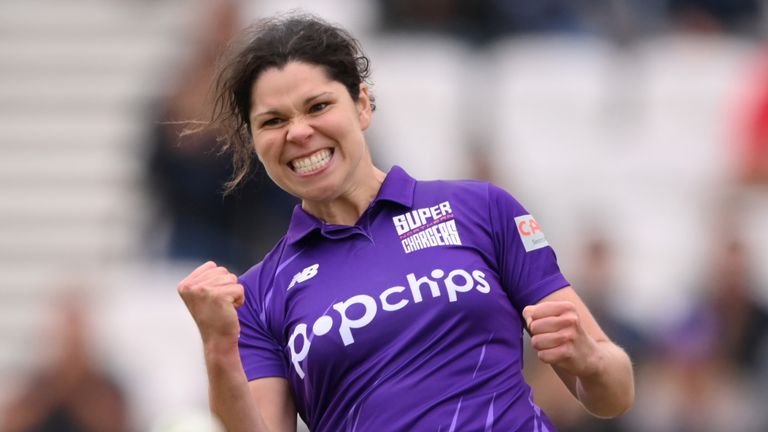 The 27-year-old right-hander thumped five fours in her 30-ball knock and helped the hosts get past 100, which was far from assured going into the latter stages.

Having dragged her side up to a total that at least gave them a chance, slim as it might have seemed at the halfway stage, she proceeded to star with the ball as well, overcoming the disappointment of having Capsey dropped off her bowling to go again and remove the youngster soon after.

It was fitting then that it was Davidson-Richards left to bowl the last five and secure the win for the Superchargers, claiming her second wicket in the process.

CATCH OF THE MATCH

Davidson-Richards was even involved in the catch of the match, although this is perhaps the one occasion when she would have preferred not to be in the action.

With the Superchargers in search of quick runs late in their 100 balls, Davidson-Richards thumped Tash Farrant out into the legside, the connection was good and another boundary seemed the likely outcome before Eva Gray rushed around the rope and took an excellent low catch to quiet the Headingley crowd.

Phoebe Graham came close to stealing this award after putting her body on the line to take the catch at to get rid of Capsey, colliding with Linsey Smith as they both went for the ball but managing to cling on to give – you guessed it – Davidson-Richards her first wicket.

Northern Superchargers hero of the match Alice Davidson-Richards: “That was a hell of a win from the team. Everyone pitched in at some point.

“We hung in there as long as possible, and it paid off. We always thought we had a chance with that total, knowing it was quite a hard wicket to bat on. We squeezed really well.

“It’s been a not too shabby start for us, except for the rain on Wednesday (at Emirates Old Trafford). We can’t complain.”

Oval Invincibles’ Tash Farrant: “We’re very disappointed. We were brilliant in the first half, in the field. We would have taken that score every single time.

“With the batting, we just got behind the rate. It was quite a slow wicket. The batters said it was quite hard to get in on. We just need ed someone to go a bit earlier.

“It was bittersweet to see my team-mate (South East Stars) Alice do really well. That should have been an easy win for us.”

Watch The Hundred live on Sky Sports between now and August 21.