On Tuesday, Who Shot Thebarman will run in his fourth Melbourne Cup, exactly 10 years and four days since he tumbled into the world on a Dunedin stud farm in New Zealand's south.

He has already raced in nine group 1 races over the Cup journey for two wins, two seconds, a third, a fourth, a fifth, a ninth and an unlucky 11th in the 2015 Cup when he received severe interference at the 200-metre mark as he looked set to run into the placings behind Prince of Penzance. 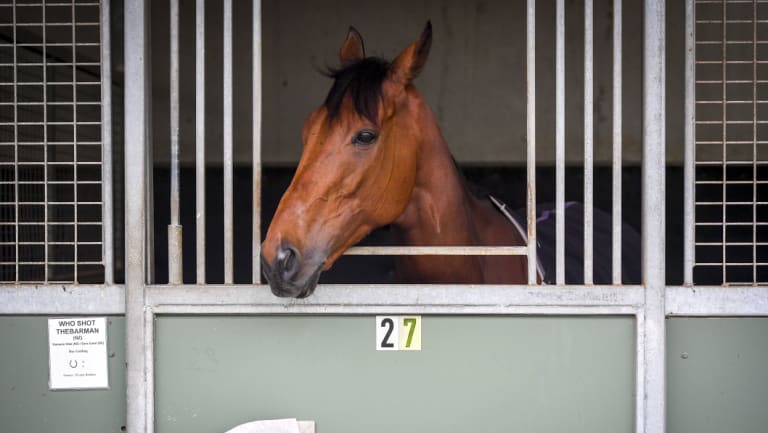 Who Shot Thebarman will run in its fourth Melbourne Cup on Tuesday.Credit:Eddie Jim

Who Shot Thebarman would have run in last year's Melbourne Cup too but for an elevated temperature on the eve of the race that forced him to be scratched after he had drawn barrier 22. He had to run the 2017 Sydney Cup twice after the first edition was abandoned mid-race because of a fall.

The true two-miler proved he was right to go around in the Cup again this year when he finished fourth in last Saturday’s Moonee Valley Gold Cup, doing his best work late in the 2500-metre race. When he jumps on Tuesday he will become just the eighth 10-year-old to start in the race and the first of that age or older since Magistrate ran as an 11-year-old in 1982.

The gelding’s owners, the O'Leary brothers, were at Moonee Valley bearing tangerine caps and big grins as they listened to jockey Tye Angland tell them it was Who Shot Thebarman's most promising run this preparation.

They know he is 10, but describe him as old to any of the clan and they will quickly remind you he won the Sydney Cup, his first group 1 win in Australia, just seven months ago.

Michael O'Leary, brother to Dan, Shaun and Humphrey, is the reason Who Shot Thebarman came to be running around the family's cow paddock in front of a ute carrying a couple of the O'Leary brothers in the Wanganui Valley at the bottom of New Zealand’s North Island around 2010.

He had bought him as a weanling for about $NZ8000 sight unseen, with the South Island’s White Robe Stud manager Wayne Stewart recommending the colt from the yard after O'Leary told him he wanted a third foal from a mare, following a homespun theory that most champions were a mare's third foal.

Wild and woolly would be one way to describe the young horse but he could run, charging across the paddocks at a rate several times quicker than the other horses around him and enjoying the grass that made the long, thin Valley with a river running through it famous.

Humphrey suspects he was sitting on the back of a horse, as he often does around the farm, when he first laid eyes on Who Shot Thebarman. "He was very fast, simple as that," Humphrey said. "You see that and think, 'if we get a saddle on that and a jockey on we will be right'. That is basically what happened."

They quickly had a name for him, to honour the oft-heard words of their Aunt Julie who used to yell 'who shot the barman' at the gaggle of Catholic kids running around family functions when her favourite tipple, a glass of gin and water, ran dry. Because the name had be shortened Thebarman became one word in Who Shot Thebarman. All that was left was to ready him for the race track. 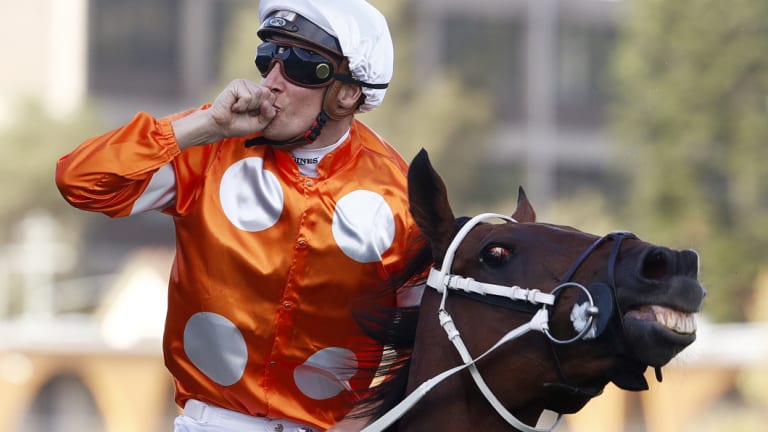 Blake Shinn on Who Shot Thebarman in April this year.Credit:AAP

But getting a saddle and a jockey on his back wasn't as easy as naming him. Who Shot Thebarman had an attitude. He loved to throw his head around (a characteristic the progeny of his dam Ears Carol have in common) and he even troubled the normally unflappable New Zealander Kirsty Lawrence when sent to her to be broken in, having run untouched for the first year of his life.

According to Dan O’Leary the horse wasn't easy to ride, nor was he easy to train as he always wanted to go as fast and as hard as he could like a big kid that hasn't learned to pace himself.

His first trainer, Mark Oulaghan, who now trains at Palmerston, down Dunedin way, told the owners they had a smart one as soon as he trialled but he prepared him in a patient manner.

"He was a little bit erratic as a young horse but he got better," Oulaghan said in 2017.

But when he went to the races he dominated, winning his first start at Trentham as a four-year-old in 2013 by 6.5 lengths and his second by four lengths with the jockey wearing the tangerine colours the owners' family on the dam side, the McCashins, made their own.

At five, he won the 2014 group 1 Auckland Cup over 3200 metres at just his ninth start, before struggling into ninth, behind The Offer, when sore in the Sydney Cup.

Soon thereafter Sydney became Who Shot Thebarman's home when the owners decided to transfer him to Chris Waller's stable. He was still tough to train and jockey after jockey had to deal with his cheeky ways as the bay gelding would throw his head back.

She fell in love with the horse after he arrived in the stable, watching him mature from a feisty beast to a more relaxed version of himself.

"As he has got older he likes people more," Baker said. 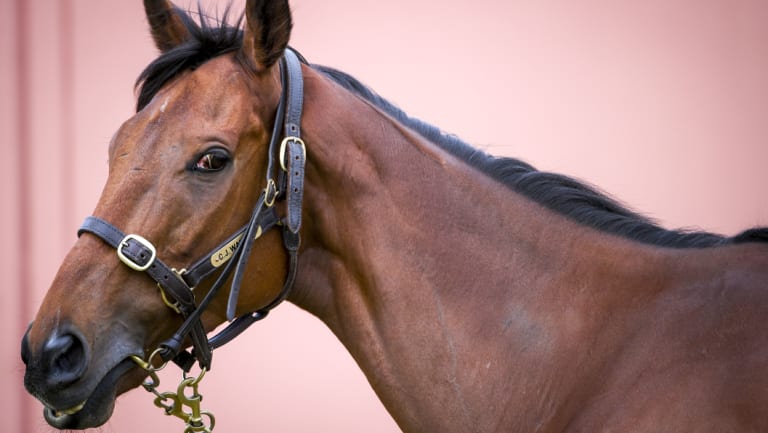 "He used to just stand at the back of his box but now he loves to come over and give people a bit of a cuddle and a chat over the door."

Around the stable he earned the nickname "Barry", as in "Barry the Barman", which eventually became the more funky sounding "Bazza". Little did the Waller stable know the horse's nickname had been Larry when he was based in New Zealand.

Dan O'Leary said the horse didn't do himself any favours at times, his aggressive approach to work a strength that needed to be managed so he remained injury-free, fresh for the racetrack while keeping his weight on.

"He's a hyperactive fellow. To be honest as he has got old he has mellowed a bit in his approach to his work," Dan said.

That's made the horse, an already popular figure at the Waller stables, a revered figure when it comes to staying races in Australia.

"He pushes himself through the pain barrier without any problem at all," Dan said.

"That is why he is such a great stayer. He can push on when other horses' lungs are screaming at them and telling them to pull up."

Humphrey agreed: "Some horses self-destruct and I think if The Barman had been with less patient people at times he would have self-destructed, because he was one of those impatient sort of horses."

Waller has worked him out, and knows well when the gelding needed to rest and when it was right to push on. In eight preparations under Waller's care before this one, Who Shot Thebarman has been placed in a group race at least once and he has turned that original investment into $4.58 million prizemoney having won 11 of his 55 starts.

On Tuesday, with horses arriving from everywhere to win the Cup, the familiar sight of Who Shot Thebarman in the mounting yard – with the O'Learys watching on – will ensure the Cup retains some of the flavour that makes the race great.

A New Zealand stayer, patiently reared that will not stop trying, a champion in most definitions of the word, an enigma in a world that wants everything right now.

Oldest runners in the Melbourne Cup